A Millennium cast profile of Alex Zahara, listing all episodes and seasons in which Alex Zahara appeared. The main cast and guest stars of Chris Carter's Millennium have summaries, trivia and biographies where available.

Sorry, there are currently no Millennium related interviews with Alex Zahara, however we do have many other Cast and Crew interviews which you may find of interest.

This profile has been viewed 2607 times. 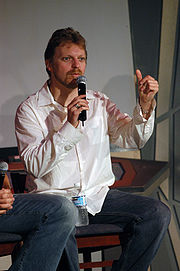 Alex was born in Northern Alberta, and, according to his mother, has always enjoyed performing for others. He grew up loving the classics in acting, Bogart, Cagney, etc. Got involved with theatre while still in school, performing in a stage version of MASH. Took some time off to travel Europe and while lying on a beach in Greece, decided to go to Film School. Later, taught a class on `Acting for Teens' at the Vancouver Film School.

A familiar face to sci-fi fans, Alex has appeared in numerous genre series, including seven guest spots on Stargate SG-1 (Spirits, 1969, Foothold, Beast of Burden, Metamorphosis, Enemy Mine, and Space Race), and the SCI FI Channel's movie, Babylon 5: Legend of The Rangers: To Live and Die in Starlight, portraying "Dulann", the lead Minbari warrior monk who serves as first officer of the starship Liandra. Alex has also made guest appearances as "Johanssen" in James Cameron's Dark Angel (Red, Rising), Andromeda (Music of a Distant Drum), The Immortal (Forest for the Trees), Welcome to Paradox (Blue Champagne), First Wave (The Purge), and the special 100th episode of The Outer Limits (Tribunal), as "SS Lieutenant Karl Rademacher". Zahara has also provided the voice of the lead character, bounty hunter "Nick Logan", in forty episodes of the animated series The Roswell Conspiracies, which aired on the Cartoon Network.

Zahara also has an extensive list of films to his credit. After making his debut in The Thirteenth Warrior with Antonio Banderas and Omar Shariff, he went on to earn a Leo Nomination (British Columbia TV/Film Awards) for his performance in the critically-acclaimed short, Evirati. Alex appeared as a gunfighter, opposite Oscar winners Kevin Costner, Robert Duvall and Annette Benning in the western Open Range.

Zahara's theatre resume is also impressive, including winning a Jesse Richardson Award in 1998 for his performance in the play Mojo. He was also nominated for best actor in 1999 for playing all five male characters in the apocalyptic sci-fi/fantasy play Marisol, as well as being nominated in 2000 for his portrayal of a writer looking for his soul in The Promised Land.

Alex has executive produced a mock rockumentary tv pilot about life on the road for a touring band, told from the Road manager's point of view, Bandwagon. Think, Almost Famous meets, Spinal Tap! Watch for Alex in an a special upcoming episode of Masters of Science Fiction, "The Discarded," starring Brian Dennehy and John Hurt, directed by Jonathan Frakes. A mass outbreak of mutations occurs on earth and the infected people are exiled into space stations and become know as "the discards." As well, keep an eye out for the Sci Fi Channel movie Ogre, about a village trapped in time, in which Alex has a supporting lead.

Alex Zahara was a member of Millennium's cast.

An official website for Alex Zahara is available at:
http://www.alexzahara.com/

Alex Zahara has an entry at the Internet Movie Database, available at:
https://www.imdb.com/name/nm0951912/

Alex Zahara has an entry at Wikipedia, available at:
https://en.wikipedia.org/wiki/Alex_Zahara

Sorry, we don't currently have a Facebook page listed for Alex Zahara.

Alex Zahara appeared in the following 1 episode/s of Millennium: