A Millennium cast profile of Andreas Katsulas, listing all episodes and seasons in which Andreas Katsulas appeared. The main cast and guest stars of Chris Carter's Millennium have summaries, trivia and biographies where available.

Sorry, there are currently no Millennium related interviews with Andreas Katsulas, however we do have many other Cast and Crew interviews which you may find of interest.

This profile has been viewed 4396 times. 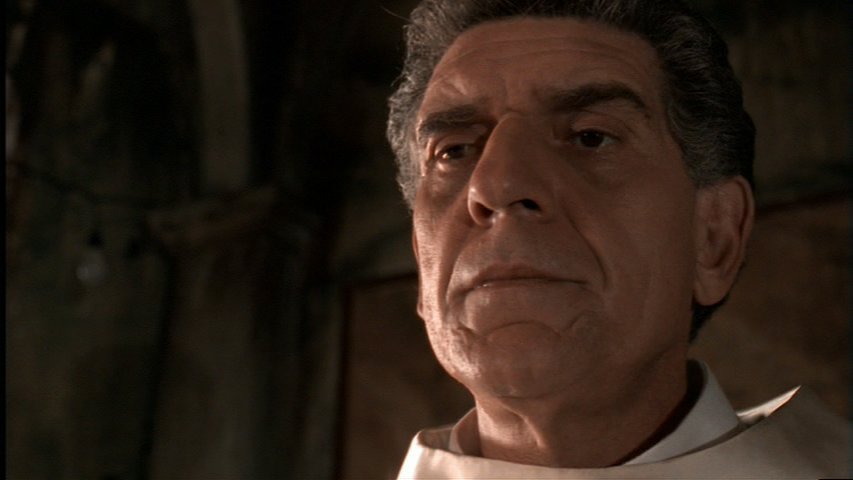 Andrew C. "Andreas" Katsulas (May 18, 1946 - February 13, 2006) was an American actor perhaps best known for his roles as Ambassador G'Kar in the science fiction television series Babylon 5, as the one-armed villain Sykes in the film The Fugitive (1993), and as the Romulan Commander Tomalak on Star Trek: The Next Generation.

Born in St. Louis, Missouri to a working-class Greek American family, he first became hooked on acting when he was 4 years old and his mother took him to a local community theater. He studied theatrical arts at Saint Louis University and earned a Master's degree in Theatre from Indiana University. From 1971 to 1986, he toured with Peter Brook's international theatre company, performing improvisational and prepared theater pieces on stages ranging from the Lincoln Center to barrios in Venezuela.

Katsulas moved to Los Angeles, California in 1986. His film roles include appearances in The Sicilian, Someone to Watch Over Me, Sunset, Hot Shots! Part Deux, The Fugitive, and Executive Decision.

Katsulas was a regular on Babylon 5, where he played Ambassador G'Kar. He also guest starred on many television shows, including: Alien Nation; The Equalizer; Murder, She Wrote; NYPD Blue; Millennium; Star Trek: The Next Generation (episodes "The Enemy", "The Defector", "Future Imperfect", and "All Good Things...", all as Tomalak); Star Trek: Enterprise (season 2, episode 22, "Cogenitor"); and Max Headroom. He also appeared in the tv-movie The Death Of The Incredible Hulk. He featured as a voice actor in the PlayStation 2 titles Primal (as Scree the gargoyle), and 24: The Game (based on the TV series 24).

In early 2005, Katsulas who, in the words of Babylon 5 creator J. Michael Straczynski, "loved smoking with a passion that cannot be described," was diagnosed with incurable lung cancer; he died the next year, in Los Angeles, California, at the age of 59. He is survived by his wife and two children.

Jerry Doyle's radio show devoted a memorial show to Andreas, who was a close friend. He mentioned Andreas fixing food for the homeless in L.A. every Sunday. Jerry pointed out that Andreas did many things to help people, out of compassion, not for publicity.

Andreas Katsulas was a member of Millennium's cast.

An official website for Andreas Katsulas is available at:
http://www.andreaskatsulas.com/

Andreas Katsulas has an entry at the Internet Movie Database, available at:
https://www.imdb.com/name/nm0441537/

Andreas Katsulas has an entry at Wikipedia, available at:
https://en.wikipedia.org/wiki/Andreas_Katsulas

Sorry, we don't currently have a Facebook page listed for Andreas Katsulas.

Andreas Katsulas appeared in the following 1 episode/s of Millennium: