Welcome Frank.
There are 69 days remaining.

This interview has been viewed 3355 times.

This is a crew interview with Chip Johannessen. 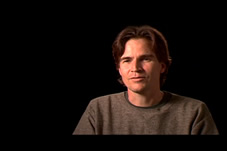 When we last left Millennium, a mysterious virus is loose, infecting Earthlings by the millions. Visions of the apocalypse dance in a feverish jitterbug in people's heads. And apparently only inoculated members of the Millennium Group are capable of surviving. Our hero, former FBI agent and Millennium Group recruit Frank Black, so far has escaped infection, apparently because he was unwittingly inoculated earlier by a member of the group.

At a cabin in the woods, Frank tells his wife, Catherine, about the time of the Black Plague and how people gathered into the mountains to survive. Catherine says Frank should kill her if she should ever become infected, but Frank says no, they should instead head for the hills, young daughter Jordan in tow. He tells her that he has a syringe containing just enough vaccine to save one person. Catherine says that their daughter should get it.

Later, Catherine awakes in bed experiencing symptoms of the virus, gets up, walks out of the cabin and in the direction of the mountains. Frank awakes to find blood on Catherine's pillow, then stares out into the forest. The next morning, his hair has turned completely gray. Holding Jordan in his arms, Frank endures an apocalyptic distress call in various languages. The two huddle in their cabin, all alone.

Ah, but can we believe what we see? According to Michael Duggan, one of the show's two new executive producers, that answer is a resounding no. Things are "not as they appeared to be," said Duggan. When the series returns Oct. 2 with a two part episode, "you'll understand exactly how that fact, which seemed accurate at the time, was actually not accurate."

Uh-huh. Which fact? So is Catherine alive or dead?

"Well, without confirming or denying that she's gone, there is great tragedy in Frank's life from which he'll be recovering at the top of this next season," said Chip Johannessen, the other newly hired executive producer.

Coy, these guys. And yet, looking over the cast list for next season, Megan Gallagher, who played Catherine, is not on it. And, to listen to the producers, the third team of executive overseers hired by creator Chris Carter for the series in three seasons, things will be quite different when Millennium returns.

"This season, he's moving back to Washington DC to consult for the FBI, which gives him more accessibility and makes the stories a little more accessible," says Duggan. Accessible? Carter, please explain.

"There was some sameness in the (husband-wife) relationship and we realized there were more opportunities to tell good stories by removing Frank from that home," he said. Oh. So look for Frank (well played by Lance Henriksen) and Jordan (Brittany Tiplady) to find new surroundings in DC. He will return to the FBI as a consultant. He then will partner with a young FBI agent, to be played by Klea Scott (Brooklyn South).

Will viewers who may be lost (raise you hands, all of you) be provided some way to become more involved in the show when it returns? "Oh, sure," said Carter, who said he is "rededicating myself to putting this project back to a place where I think it can be."

At its core, Millennium is about the struggle between the forces of good and evil. Those unfamiliar with the show should know that Frank has the ability to enter the minds of criminals and feel what they feel. It's a gift that's attracted him to the Millennium Group, a prophecy believing organization that may or may not be on the up and up.

In season one. the show was rapped for its incessant involvement with serial killers. Last season devoted more to an explanation of just what the Millennium Group is.

For season three, Carter apparently wants the show to go back to some of its first season roots. "I'll just say that the reason Millennium is even a show is because there were human monsters that you couldn't do on the X-Files that really were interesting to me as a storyteller," he said. "And I think that's really what it will continue to be. That's what makes the show scary - scarier than X-Files in a way, because the monsters are all too real."

That the lowly rated show, (No. 134 for the season out of 200 programs) still is on the air is itself a sign of a "hopeful future." You wouldn't want to say it to Carter's face, but the series probably owes its continued existence to the success his X-Files has brought to Fox.

So, if the series gets "fixed" often enough - if it makes it to a fourth season that crosses over into the year 2000 - you can expect Millennium to take yet another major plot change.