This is an excerpt of an article in which writer Kay Reindl talks about Hollyweird, the apocalypse and her experiences in the "boys club".

Welcome Frank.
There are 96 days remaining.

This interview has been viewed 1996 times.

This interview is courtesy of The 11th Hour.

This is a crew interview with Kay Reindl. 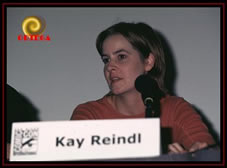 Her second season Millennium episodes may include themes like celestial visitations, arcane cults, and apocalyptic rituals, but Kay Reindl found some of the series' most apprehensive moments to be in the third season -- that is, behind the scenes. "It was a bad year for everyone," says Reindl, who has co-written four episodes of the now-defunct program with partner Erin Maher. "We had an ideal experience with [second season producers] Morgan and Wong. They are terrific teachers and experienced show runners. This year was different. We had a new show runner, Michael Duggan, who didn't work out, and then we ended up scrambling through the rest of the year. [Series creator] Chris Carter was too busy to be as involved as he probably wanted to be. Producing a TV show is tough enough without having upheavals at the beginning of the season."

And while producing any television series is daunting, the already flailing Millennium posed its own unique set of difficulties. Debuting in fall of 1996, the second show from X-Files producer Chris Carter met with initial high ratings and critical praise, but soon fell into a serial-killer-of-the-week slump. The series, which detailed the struggle of criminal profiler Frank Black (Lance Henriksen) to shield the evils of the world from his wife and daughter (Megan Gallagher and Brittany Tiplady, respectively), posed in its title credits the question "Who cares?" only to find that the answer was hardly anyone. The second season, however, promised great change for the series, including an emphasis on the spiritual aspects explored in the first season's strongest entries, as well as the addition of Glen Morgan and James Wong (Space: Above and Beyond, X-Files) as executive producers. For newcomer Reindl, the second season also signaled change, both personal and professional.

"We got a terrific education our first year in TV," enthuses Reindl, who attended the California State University at Northridge as a biology major before a job at Universal led to an interest in professional writing. "We had three good experiences [in the second season] and felt like we learned something every time." An avid reader and film buff who sites inspirations as diverse as Jonathon Carroll, Anne Lamott and Tom Stoppard, Reindl particularly enjoyed the creative approach of the second season producers. "Morgan and Wong are the best people in TV, bar none. They protect the work, sometimes going out of their way to do so, and they are experienced and genuinely nice people. They also had a very clear idea of what they wanted from the outset and it was something we were very interested in. We're all over secret societies and stuff like that and we always wanted to see that explored with the Millennium Group. Morgan and Wong were terrific in that regard. You could pitch anything to them and they were very open-minded. I think that comes out of knowing where the show is going.

"During season three, it was very hard to get anything through and when you did, the life was bled out of it," Reindl continues. "It was more of a negative atmosphere: 'We don't want serial killers, angels or secret societies.' It's hard to do that when you don't replace it with anything else. In contrast, we had so many ideas during season two that it was definitely, for us, the more creative season. I also think it was monumentally terrific television and if the series hadn't had the stigma of being dark and a failure, maybe it would have gotten more praise.

"I also take issue with the genre and TV magazines. For the most part, they seem to be covering and praising the same stuff and it takes them awhile to hop on the bandwagon. Take Buffy, for example. It took the media forever to finally see that the show rocked. It seems like, if you're supposed to be covering this stuff, you'd be way ahead of everyone else and you'd want to see good genre stuff succeed. I think Millennium really got screwed in that way. I also think that online magazines, such as this one, might and should become more important for those writers who work in the genre world. If the regular magazines aren't going to do it, someone should!"

Read the full interview over at The 11th Hour.

This interview is courtesy of The 11th Hour.