This article was contributed by ethsnafu (Mark Hayden) and relates to the episode Pilot of Chris Carter's Millennium television series.

There are currently 7 related articles available for this episode. You can access a list of all Millennium Episode Articles here.

This Millennium article has been viewed 33263 times.

Pete Wunstorf - Outstanding Achievement in Cinematography in a Pilot (Nominee)

Written In The Stars

Mysterious symbols are associated with Millennium both within its episodes and on the visual identity given to the show's logo and associated merchandise. The most notable of these is the Ouroboros, the alchemical symbol of self-reflexivity or cyclicality, but runes and symbols can also been seen as faint watermarks in the background of the show's titles screen and a curious map or chart is evident on the DVD menu screen of all the three seasons of the show.

This brief article is the result of our attempts to identify that strange chart of symbols and identify why it was chosen to reflect the thematic of the show in the look of the DVD releases. We were able to deduce that the chart is chart of the heavens, well over a millennia old, known as The Suchow Planisphere. 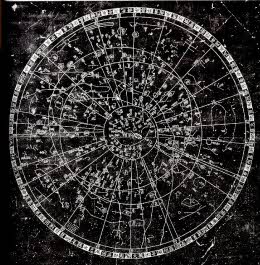 The word planisphere (or "planisferium") means "celestial plane" as is defined as the flat plane representation of the star-filled sky. The instrument was first described in the early 11th century by the Persian astronomer, AbÅ« RayhÄn and it was a century later when The Suchow Planisphere came into existence.

The planisphere was carved onto stone (to preserve it) approximately half a century later, in 1247 CE (Southern Song dynasty, Chunyou reign), by Wang Chih-Yuan. What is of interst is the detail contained within the planisphere itself. Most of the stars in the Chinese sky are carved quite precisely upon it and also recorded is the supernova of 1054 CE (in Taurus).

For a long time the stele on which the planisphere was carved was located in the Wên Miao Temple (Confucian Temple of Literati), originally built in 1141 CE, in the historic garden city of Suzhou in the south of Jiangsu Province. The planisphere is now housed in a Suchow Museum (the Stone Carving Museum).

Although only 10 rubbings of the stele were made they remain in existence and it was one of these rubbings that was used as the source image for the mysterious chart that adorns the Millennium DVD menu screens.

There seems to be nothing particularly fitting about the use of that image on the DVD menus. There is scant information out there with regards to Huang Shang and little to separate him from other astronomers of his time. The year the planisphere was created does not yield a particularly momentous stellar configuration or event that might hint at why it was chosen nor was there anything notable in terms of movements within world religion or politics that year that might provide further clues to it use.

Though it is impossible to say I am forced to conclude that the image was selected merely for its aesthetic appeal rather than any occult reference that might link it to the thematics of Millennium.

The The Suchow (Soochow/Su-chou) Planisphere superimposed over the Millennium DVD Menu is a complete match. The menu is © Copyright Twentieth Century Fox Home Entertainment, Inc and its related entities. All Rights Reserved.