This article was contributed by Viivi and relates to the episode Powers, Principalities, Thrones and Dominions of Chris Carter's Millennium television series.

These Millennium episode related articles have been kindly supplied by fellow Millennium fans.

The articles are linked to their respective episodes both here and in the detailed Millennium episode profile pages.

This Millennium article has been viewed 60321 times.

Despite the fact that Frank feels he is unable to continue with his work on an emotional level, Peter Watts insists that he investigate a series of strange satanic slayings that may hold an unexpected link to the mysterious death of Bob Bletcher. While working on the case, the Millennium Group becomes caught in a battle between the human representations of demons and angels here on earth.

There are a total of 170 available images from Powers, Principalities, Thrones and Dominions.

The chilling, yet humorous, character of the slippery attorney Al Pepper is largely based on brilliant acting and writing. But when it comes to the nervous feeling that the scene in his office leaves us with, it would be wrong to disregard the skills of those who took care of the set decoration.

When Frank Black pays a visit to Al Pepper's office, one can see a glimpse of a painting on the right. It's visible again for a moment when Frank leaves the room at the end of the scene. The painting is a copy of The Nightmare by Henry Fuseli. 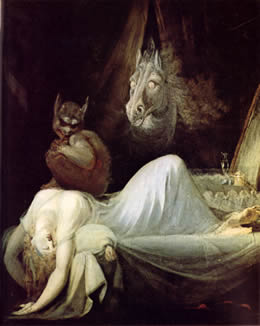 The Nightmare depicts a young, sleeping woman who has a demonic creature sitting on her chest. In the background of the painting, a pale horse is staring with empty, white eyes. Fuseli painted at least two versions of the same theme, this one in the year 1802. The first version, painted in the year 1782, became more famous. It has been suggested that the woman in the painting is Fuseli's beloved Anna Landolt, whose parents refused to allow her to marry him. Thus The Nightmare could be interpreted as an allegory of disappointment.

Interestingly, the painting can also be seen as a vivid depiction of a sleeping disorder, the sleep paralysis. People who have suffered from it say that they felt the presence of something extremely evil and threatening in the room, and usually something pressing their body while they could not move at all nor make a sound.

In Old English, such an evil being was called a mare, related to mara, a malignant female entity in old Scandinavian folklore. The Finnish word for a bad dream, painajainen, which is still used in everyday language, translates as 'a pressing thing'. Additionally, it has been said that the sleep paralysis disorder could explain the concept of the evil spirits succubi and incubi.

The rest of the interior of Al Pepper's office was carefully decorated to support the ominous atmosphere of the scene, too. Behind Pepper, we can see a red sculpture, depicting a human torso. This brings disturbing associations to mutilation, blood, torture, pain, burning.

There are also at least two smaller sculptures in the room, one a head of some lion-like animal, the other resembles remotely the winged demon figure that was found on archeological diggings in the movie The Exorcist. And seen only vaguely on the background, a candlestick with black candles completes the decoration of this diabolic office.