This article was contributed by Viivi and relates to the episode The Beginning and the End of Chris Carter's Millennium television series.

There are currently 3 related articles available for this episode. You can access a list of all Millennium Episode Articles here.

This Millennium article has been viewed 23314 times.

Random scenes from The Beginning and the End

At the opening sequence of the episode The Beginning and the End we see a comet on its journey through space, accompanied by Frank Black's monologue.

When he mentions a comet's appearance being considered as the prophecy of the birth of kings and the death of empires, glimpses of two pieces of art are shown. 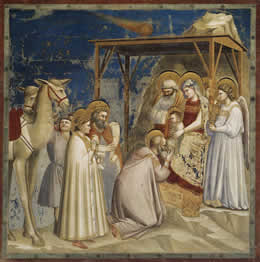 The first, showing a comet and the holy family, is a detail of the fresco Adoration of the Magi (1304-06) by the Florentine painter and architect Giotto di Bondone. The fresco is one of many in the Scrovegni Chapel in Padua, Italy, representing scenes from the life of the Virgin and Christ.

This painting shows the three magi having come to pay their respect to the newborn child and his family in the stable in Bethlehem. Above them shines the star that showed them the way, vividly depicted as a rushing ball of fire. The situation seems peaceful and quiet. An angel is also present. Only the camel driver is an exception of the otherwise devout group, as he's paying his attention to the camels while the others concentrate on the baby. It has been said that Giotto used this contrast to increase the effect of the main scene. 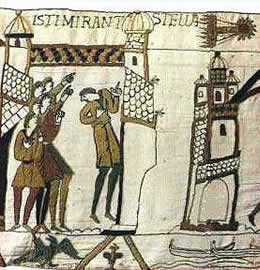 The other piece of art that we see during Frank's monologue is a detail from the Bayeux Tapestry (c. 1073-83). This 240-foot-long, 73 meters, work of art is not really a tapestry with a woven design, but a strip of linen embroidered in coloured wools. It tells in words and pictures the story of the events leading up to the Norman conquest of England. The two combatants are the Anglo-Saxon English, led by Harold Godwinson, and the Normans, led by William the Conqueror.

The scenes and figures on the tapestry are somewhat stiff, yet expressive. This detail shows six Anglo-Saxons marvelling at an extraordinary star. The text in Latin beside the comet, isti mirant stella, approximately translates as 'these ones are looking at the star'. Like the one in Giotto's painting, this has also been identified as Halley's comet, appearing in the year 1066. Four of the men are pointing their finger at it, emphasizing the astonishment and unease created by the sight. In the middle ages, a comet was considered a bad omen. Later the same year King Harold died at the battle of Hastings.

Knowing the facts above, it would be tempting to assume that the comet which Frank looks at in the opening scene and which reappears during the episode as well as in some of the later episodes, would also be Halley's comet. However, that can't be the case because the events of the show take place during the last few years of the 1990's, and the latest appearance of Halley's comet was in 1986. It will reappear next in 2061 or 2062.

According to the Polaroid Man, the comet is P1997 Vansen-West. But, as Brian Dixon of the Millennial Abyss has discovered, that name is one of the many Millennium inside-jokes. It refers to Lieutenant Nathan West and Captain Shane Vansen in Space: Above and Beyond by Glen Morgan and James Wong.

Apparently, the model for Frank's comet was Hale-Bopp. Its appearance in 1997 could rightfully be defined as spectacular, and this two-tailed comet gained a lot of attention worldwide. Unfortunately, it also created panic as nothing quite like it had been seen for decades. Some believed that the comet was being followed by an alien spacecraft which resulted to the mass suicide of the followers of the Heaven's Gate cult.

Sources for the Bayeux Tapestry:
Hugh Honour & John Fleming: A World History of Art, 1982.
The Wikipedia article at https://en.wikipedia.org/wiki/Bayeux_Tapestry