Explaining the laughing devil - The Curse of Frank Black

This article was contributed by Graham P. Smith and relates to the episode The Curse of Frank Black of Chris Carter's Millennium television series.

Welcome Frank.
There are 344 days remaining.

These Millennium episode related articles have been kindly supplied by fellow Millennium fans.

The articles are linked to their respective episodes both here and in the detailed Millennium episode profile pages.

There are currently 3 episode reviews available for this episode. You can access a list of all Millennium Episode Reviews here.

There are currently 2 related articles available for this episode. You can access a list of all Millennium Episode Articles here.

This Millennium article has been viewed 11926 times.

There are a total of 145 available images from The Curse of Frank Black.

Explaining the laughing devil - The Curse of Frank Black

One of the most fascinating elements of the Millennium episode The Curse of Frank Black, is the astonishingly creepy appearance of Satan on Frank Black's television. The production team responsible for this episode are to be congratulated on their choice of animation. This article will explain what the animation actually was that plagued Frank during this amazing Halloween episode. Frank's television set repeatedly depicts a scene from the wonderful short animated film known as The Mascot by pioneer stop-motion artist Ladislaw Starewicz, (1892-1965) who was also known as Wladyslaw Starewicz and Ladislas Starevich, whose films have been difficult to find in the West. Born in Moscow to a family of Polish origin, Starewicz displayed early interests in photography and entomology. He began experimenting with animation in 1910, when the stag beetles he wanted to film fighting refused to cooperate. These experiments led to The Cameraman's Revenge (1912), a droll tale of insect infidelity. Starewicz's most satisfying films involve insects and other bizarre creatures. The Frogs Who Wanted a King (1922), an adaptation of Aesop's fable, is crowded with the odd little amphibians who petition Jupiter for a king--and pay dearly for their folly. The eerie revels held by a devil doll and his grotesque, skeletal followers in the live-action and animation combination The Mascot (1933) are far more entertaining than the adventures of the little stuffed puppy whose heart is a mother's tear. The scenes of the puppy and the saccharine sequences in The Voice of the Nightingale recall the criticisms leveled at Starewicz's feature, Le Roman de Renard (The Tale of the Fox, 1937): the images are often beautiful, but the pacing is very slow, with little acting in the animation. Starewicz invented the 3-d stop motion animated film (puppet film) in 1910 and continued creating them until his death, even after he retired in 1959. His films, although emotionally aimed at children, are what we today would deem "strange" because of the often grotesque characters and situations... keep in mind, what was considered "for children" in the early 1900s is much more intense than what is produced for children today!

The legendary Ladislaw Starewicz created some of the most imaginative and loveliest works of puppet animation ever filmed. While working in Russia, he directed his first classic The Cameraman's Revenge (1912), a story of love and infidelity among the insects, and the recently rediscovered The Insect's Christmas (1913), a dazzlingly beautiful film of the Yuletide celebrations of a Christmas-tree ornament and his tiny friends. After relocating to Paris, Starewicz made the political allegory Frogland (1922), the gorgeous hand-colored fable Voice of the Nightingale (1923), the irresistible The Mascot (1933), and the snowland fantasy Winter Carousel (1958). Starewicz's grasshoppers, dogs, frogs, dolls and other creatures portray heroics and follies with an exuberance of humor and invention.

The film seen in Millennium's The Curse Of Frank Black (where the devil keeps laughing every time Frank's TV switches itself on) is called The Mascot a/k/a Puppet Love, a/k/a The Devil's Ball and was made in 1933/4, lasting a duration of 30 minutes.

An excerpt from the The Curse of Frank Black transcript:

[Frank goes to check the front door. It opens easily. He rattles the doorknob and finds nothing wrong with it. He shuts the door and shakes his head in disbelief. He grabs a piece of candy from the bowl and a handful of mail. He shuffles through the mail as he walks back toward the living room. We see mail from "Association of Craftsmen Technicians and Specialists", "Academy of Children's Television Society", "Academic Community of Teachers & Students".

As Frank sits in his chair, the TV comes on showing a demonic laughing scene of a stop-motion Devil from Ladislas Starewicz's 1933 short film "The Mascot". Frank drops the mail on the coffee table and stands up. The TV turns off. He then notices the TV remote in the chair where he was sitting. He picks up the TV remote, sits back down, and smiles. He turns on the TV that is now showing hockey scores.]

ANNOUNCER: Turning to scores in the N.H.L. on this Halloween night it was Buffalo losing to Carolina, 2 to 6. Philadelphia added to their road-win streak beating Washington, 8 to 2.

[Frank starts paying close attention to the specific numbers being shown on the TV screen and being heard from the announcer.]

ANNOUNCER: Detroit, behind a Federov hat trick, beat Los Angeles, 6 to 2 and Chicago lost down in San Jose by the score of 6 to 8.

[The demonic laughing stop-motion Devil pops back on the TV screen.]

An excerpt from my official and original script of The Curse of Frank Black:

Frank enters, still flipping through the envelopes, he sits back in an easy chair. behind him, the television TURNS ON!

Startled, Frank turns toward the T.V. On it, is an animated stop motion Satan from Ladislaw Starewicz's short film "The Mascott" ("Fetiche Mascotte." 1933) laughs demonically and speaks in Russian.

CAMERA PUSHES IN as he tenses. What the hell is going on?

The devil LAUGHS while summoning spirits to a party.

as he eases up out of the chair, tenses and getting a better look, the television turns OFF. He considers for a moment, before sensing something on the chair. He lifts onto one haunch and pulls the TV remote out from beneath the chair.

He looks at it as if "how could I be so jumpy?" he dumps the mail on a table and settles back into the chair to relax. Aiming the remote at the TV he turns it on.

Turning to scores in the NHL on this Halloween night...

A graphic fills the RASTER, listing the evening's scores.

It was Buffalo losing on the road to Carolina, 2 to 6.

Philadelphia added to their road win streakbeating Washington, 8-2. Detroit, behind a Federov hat trick beat Los Angeles 6-2 And Chicago lost down in San jose by the score of 6 to 8.

reacts... "those are weird scores." (Because of the similarity of numbers, not the outcome.) Suddenly, O.S., STATIC. Frank turns back to the television.

The animated SATAN continues to call forth the hordes of hell.

aims the remote and clicks to change the channel...

the desired channel should appear in the the upper corner, so WE know Frank is not trying to turn off the set. STATIC APPEARS before the devil animation stubbornly returns.

aims the remote and clicks to change the channel...

turns off the set. He pauses. Things are getting a little weird around here. He considers, troubled by something. he leans over the table and picks up the matchbook cover again.

At the time of writing, you can purchase The Mascot as part of a short film collection entitled The Camera Man's Revenge and other Fantastic Tales available from retailers such as Amazon: 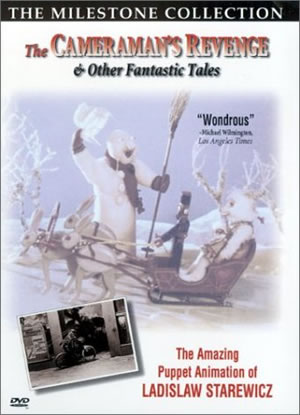