This article was contributed by Viivi and relates to the episode Midnight of the Century of Chris Carter's Millennium television series.

This Millennium article has been viewed 34506 times.

Random scenes from Midnight of the Century

The scenic design of Peter Watts' study in the episode Midnight of the Century is yet another example of the talent of the showmakers. When Frank Black and Lara Means attend a Christmas party given by Peter and his family, they have a perplexing discussion with him in his room, surrounded by pieces of art that support the subject of the discussion and the theme of the episode.

Right after Lara and Frank have stepped into the study, and Frank stands in front of the fireplace for a moment, we can see Nativity above the mantelpiece on the left, and the calendar page October from Les très riches heures on the right. (A moment later, apparently another page of the book is visible, but not clearly enough as to be properly identified.) The Mérode altarpiece can be seen on the wall behind Peter near the end of the scene, as he says: "Possible futures exist, like branches on a tree".

The richly detailed Mérode Altarpiece, named after its last private owner, has the subject Annunciation. In the central panel of the triptych, archangel Gabriel is telling Mary that she will be the mother of Christ. The left wing depicts the patrons of the altarpiece, Peter Engelbrecht and his wife. In the right we see Joseph in his carpenter's workshop. The objects in the workshop are to symbolize the Passion of Christ to come. For example, the sword-shaped saw on the floor alludes to the weapon St Peter would use to defend Jesus while he was being arrested. The mousetrap may also refer to Christ's arrest, or it might symbolize catching the devil. 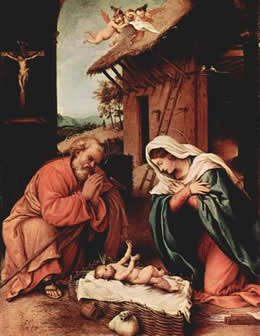 Lorenzo Lotto's painting Nativity shows a traditional scene depicted in typical Renaissance style. Mary and Joseph have knelt down to admire baby Jesus. The artist has placed three little angels above them. Vaguely in the background one can see a shepherd with his lambs. It has been regarded as unusual for the stylistic period however, that there's a crucifix behind, and a mousetrap on the right. As was the case with the Mérode Altarpiece, these items might have been used to prefigure the coming events of Christ's life. 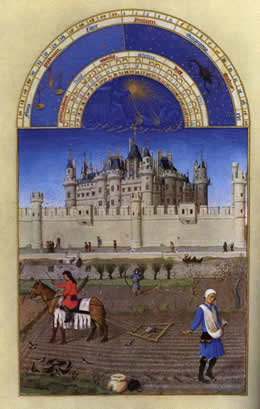 The third work of art on Peter's wall is a page from A Book of Hours, clearly representing a different mode of expression than the other two paintings, but similar to a certain extent because of its Christian aspect. A book of hours is an illuminated collection of prayers, texts and psalms, often with a calendar. Pol, Herman and Jean de Limbourg illuminated this 'Very Rich Book of Hours' for John, Duke of Berry. The book consists of 416 pages, of which about half are full page miniatures. It opens with 12 calendar pages, one for each month. The scenes depicting labours and events of the month are surmounted by the signs of the zodiac. The page on Peter's wall, October, shows peasants tilling and sowing. Dimly visible in the background is the Louvre, Charles V's royal palace in Paris.

None of these pieces of art are showed in the episode in a way that would provide some obvious meaning for their being there. No one points at them or directly talks about them. Peter does seem to look at one of them once, but at that moment it remains outside the screen for us. That makes the set decoration brilliant because this way the power of art has the chance to influence us without us really even noticing it, and without us having to feel being patronizingly enlightened.

The painting October from the book of hours delicately supports Peter's lines when he talks about time. He says "Wouldn't it be wonderful if in life, you could pick the speed which you were going to experience time? (...) I'd have autumn go much slower; winter go a little faster. And the time that I was experiencing regret, I'd have go slower actually, so I could fix and leave the situation without regret. I'd like to know how much time I have left."

Then Peter stands in front of the fireplace for a while, and he probably gazes at Nativity when he says "Imagine that: Christ wasn't even born on this day, maybe not even 1,997 years ago. So no one knows for sure when the millennium really begins and ends. Or how much time is left."

And as mentioned earlier, this is what Peter says when the Mérode Altarpiece is visible on the wall behind him: "Possible futures exist, like branches on a tree. Most of us only see the path we're on, but some people -- the gifted ones -- see those branches." His lines and the painting sum up the different elements of the discussion: time of the year, time in general, Christ's birth, the millennium, even the importance of family.

The discussion along with the choice and arrangement of the pieces of art make a tight circle of warmth and friendship for Frank, Lara and Peter. However, the set and the lines also hide a vague warning of fear and sorrow to come.

Sources for Nativity by Lorenzo Lotto: The Web Gallery of Art, https://www.wga.hu/

Sources for the The Mérode Altarpiece: The Web Gallery of Art, https://www.wga.hu/ The Wikipedia article at https://en.wikipedia.org/wiki/Robert_Campin