Season 5 will bring Frank Black and his daughter Jordan up to the present day with dramatic new episodes that cling faithfully to the series’ time-honoured themes of suspense, mysticism, psychology, and the supernatural. Now working as a part-time lecturer at the FBI's Quantico Academy, Frank thinks he has finally left the dark intrigue and harrowing imagery of his former life behind. But when he is approached by a former student struggling to solve an horrific case, Frank is drawn back into a world of evil and doomsday-ideology. Though the millennium has long since passed, it becomes apparent that the most gruesome acts of inhumanity are still on the rise, and that uncanny current events which presage the prophesied End Times are as prevalent as they have ever been.

The Virtual Fifth Season will premiere with its first episode, “The Begotten”, on FRIDAY, JANUARY 5, 2007 on the virtual BVC network. A full order of 22 episodes will air weekly, every Friday, in an uninterrupted run through to June.

“Millennium - Virtual Season 5” is a product of Triple Five Productions, in association with This Is Who We Are, for Blackster Virtual Community. Anthony J. Black and James Jordan serve as Executive Producers. Millennium was originally created by Chris Carter for 20th Century Fox Television, each of whom own all their respective properties and copyrights and do not endorse the virtual season in any way.

Welcome Frank.
There are 219 days remaining.

With grateful thanks to the following for their dedication and contributions to the Millennium fan community and for allowing this site to host and share the episodes:

Official Behind the Scenes Blog

Visit the official VS-5 Behind the scenes Blog where Showrunner James Jordan takes you deep inside the production of VS5 - not to be missed.

Visit the Virtual Season 5 Forum. Discuss the episodes, talk to the production team and rate your favourite episodes.

Retired serial profiler Frank Black has a special gift, the ability to see into the minds of criminals. Seven years after the dawn of the millennium, Frank (Lance Henriksen) thinks he has finally left the dark intrigue and harrowing imagery of his former life behind. However, whilst working as a part-time lecturer at the FBI's Quantico Academy, Frank is approached by one of his former students named Brad Locke (James Badge Dale) to come back and help solve some of his most challenging cases.

Realising that the danger to such innocents as his daughter Jordan cannot be ignored, Frank once again becomes a key player in the fight against the evils of the world. Though the year 2000 has long since passed, it becomes apparent that the most gruesome acts of inhumanity are still on the rise, and that uncanny current events which presage the prophesied End Times are as prevalent as they have ever been. 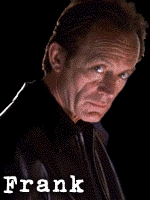 Retired serial profiler Frank Black has a special gift, the ability to see into the minds of criminals. Ten years ago he moved his family to Seattle to escape the violence and horror he dealt with while working for the FBI in Washington, D.C. and began consulting for a team of underground ex-law enforcement experts known as the Millennium Group. But when his wife Catherine was kidnapped, Frank began to realise that there were certain secrets that the Group had kept from him, and when it became apparent that they were in fact carrying out their own cult-like agenda, he quit.

When a deadly viral outbreak spread across the country killing thousands of people, including his wife, Frank discovered it was all a plot by the Group. Disillusioned and outraged, Frank returned to the FBI with a new resolve to expose the Millennium Group. But protecting his job and daughter, who Frank fears shares some part of his gift, proved to be no easy task and he was forced to leave the bureau for a second time.

Once the year 2000 had passed, Frank settled on the East Coast with his daughter, thinking that he had finally left the dark intrigue and harrowing imagery of his former life behind. He now works as a part-time lecturer at the FBI's Quantico Academy, but no longer has any material association with the traumatic investigative role of his past. 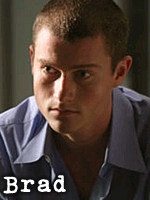 Brad Locke is a young detective in his late 20s working for the Washington, D.C. police department. He is a former student of Frank’s at the FBI Academy, but was washed out by Frank for his impatience and bull-headedness. He recognised Frank as a great teacher and mentor, but became frustrated with his unwillingness to explain his reasoning and share his secrets. This agitated Brad somewhat and led to an increasingly hostile relationship between him and his teacher. Despite recognising his talent, Frank became convinced that Brad’s attitude would prevent him from succeeding, and washed him out of the Academy.

Brad has a particular drive to defend the victims of crime because of his own traumatic upbringing. He was raised in care from an early age, bouncing around through a variety of children’s homes. During that time, he suffered a combination of physical and sexual abuse, but he has never spoken about the details. This is something he has suppressed and kept secret from everyone, including Frank. It is what gives him the drive to do the job that he does, gives him a personal sympathy with victims and an aggression towards suspects. 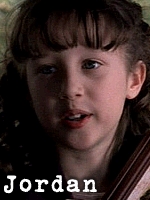 Jordan Black is Frank's daughter, about to turn sixteen years old. Her life has not been an easy one, moving around with her father and losing her mother when she was just seven. However, Jordan has managed to adapt and settle to relative contentment, and the calm serenity which she inherits from her mother prove a constant comfort to Frank.

It is what she may have inherited from her father that is of more concern. Over the years, a number of incidents have led Frank to believe that Jordan is gifted with a special insight similar to his own, although with its own unique manifestations. Whether or not this is the case, it is apparent that there are forces of good and evil in the world which may seek to exploit her gifted nature for their own ends. 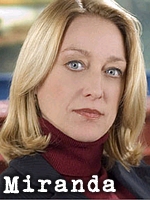 Miranda Graff is Frank’s therapist on a casual basis. She seems him from time to time to talk through a few slight problems Frank has had in recent years with insomnia and odd dreams. She is a seasoned professional, yet despite her vast experience there are often times when Miranda feels herself empathising too closely with her clients. She could perhaps be criticised in this regard for getting too attached and caring too deeply -- this is simultaneously her greatest strength and her greatest weakness.