This page is an introduction to White Zombie whose music was used during the Millennium episode Pilot. A complete list of all music by White Zombie that was used throughout Millennium is also listed below.

This music profile has been viewed 47003 times.

Music by White Zombie used in the Millennium episode Pilot White Zombie was an American band named after the 1932 film White Zombie, which starred Bela Lugosi.


Where White Zombie can be heard in Pilot

Music from White Zombie was used in a total of 1 episode/s of Millennium. Below is a complete list of all music by White Zombie heard throughout the series and the episodes in which it was used, including links to the relevant music and episode profiles:

Founded by Rob Zombie (lyrics/ vocals/ art) after coming up with the band idea in 1985 while attending at Parsons in his Junior year. Rob's girlfriend at the time, Sean Yseult, was on bass and they asked Ena Paul Kostabi to teach Sean how to play the bass as she on the Farfisa and Ivan on drums were in a band called LIFE at the time. Ivan joined the next line up. Eventually they found a drummer, Peter Landau. Based in New York City, White Zombie was originally a noise rock band in the vein of fellow New York band Sonic Youth; Sonic Youth's Thurston Moore and fellow alternative rock icon Kurt Cobain have professed to be fans of their early work. White Zombie's first release was an EP titled Gods on Voodoo Moon and was recorded on October 18, 1985. Only 300 copies were pressed, of which only 100 were sold - the band members still retain possession of the remaining 200.

In 1986, Rob hired Tim Jeffs as the second guitarist who only appeared on the first pressing of the band's second EP Pig Heaven and played during a few live shows. The guitarist was quickly replaced by Tom Guay later that year who would appear on the second pressing of Pig Heaven, play guitar on the bands third EP Psycho-Head Blowout in 1987, and their first full length 1987 album Soul-Crusher. John Ricci replaced Tom Guay shortly after the release of Soul-Crusher, only to quit in 1989 after the release of their second LP Make Them Die Slowly. Jay Yuenger or "J." then replaced Ricci for the remainder of the band's years, which saw them in a more metal-influenced direction.

After Peter Landau was fired, Ivan de Prume was hired for drums. His time in the band lasted until the ending of the La Sexorcisto tour, when he was fired and replaced by Phil Buerstatte or "Philo". Phil only appeared on various singles the band released between albums and was soon fired due to Rob's dislike for him. He was soon replaced by John Tempesta who had previously played for Exodus and Testament.

The band cut a number of semi-independent recordings in New York in the 1980s, these included the albums Soul-Crusher and Make Them Die Slowly, as well as the EPs Pig Heaven, Psycho-Head Blowout, and God of Thunder. White Zombie's first major-label album, La Sexorcisto: Devil Music, Vol. 1, was released in 1992, and the band's profile was raised significantly in 1993 through frequent references on Beavis and Butt-head and other MTV programming.

Their major label debut was followed in 1995 by Astro Creep: 2000. In 1996, an album of remixes was released under the title Supersexy Swingin' Sounds.

White Zombie was known for combining heavy-metal music with driving lead guitar riffs (as on "Super-Charger Heaven"), overlayed with lyrics heavily influenced by horror films, with Satanic and often nonsensical imagery. Unlike other metal bands of the 1990s, White Zombie was exclusively a "fantasy" band, one that wrote songs not about real life, but simply about surreal horror fantasies, backed by whimsical live tours.

The group officially disbanded in 1998 shortly after the release of Rob Zombie's solo album Hellbilly Deluxe.

On January 3, 2007, it was anounced by Rob on his website that a box set would be released containing all the music White Zombie had ever recorded. 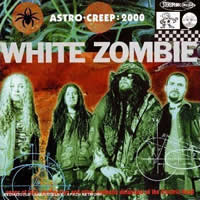 Album Title:
Astro-Creep: 2000 - Songs Of Love, Destruction and Other Synthetic Delusions of the Electric Head

Scene:
More Human Than Human can be heard during the following scenes in the Millennium episode Pilot:

Used during the episode teaser. Background music in The Ruby Tip, where stripper Tuesday dances for The Frenchman.

"More Human Than Human" is the second official single off the Astro-Creep: 2000 album by White Zombie. The song can also be found on Rob Zombie's Past, Present & Future, the greatest hits album The Best of Rob Zombie, and a remix can be found on Supersexy Swingin' Sounds. In addition to its title, the song bears many references to the cult science fiction film Blade Runner throughout. Indeed many quotes and slogans that can be heard in the movie appear in the song. The song quickly became the band's highest-charting and most recognizable single in the entirety of their career. The single earned the band their second Grammy nomination for Best Metal Performance in 1995. It has also appeared in a fair number of movies such as The Cable Guy in 1996, Can't Hardly Wait in 1998, The Marine in 2006, and the remix featured in The Covenant in 2006.

A notable cover of the song is the Richard Cheese jazz version on his Tuxicity album released in 2002. An electronica band called Razed in Black covered the song featuring Thomas Thorn as a guest performer for the compilation album Signal to Noise: Reinforced Industrial Hits in 2001. Also, Metallica performed a live doodle of "More Human Than Human" at Donington a few months after the release of Astro-Creep: 2000. The song was recorded by Shockwerks for the White Zombie tribute album Super-Charger Hell in 2000 and then again by Transient for The Electro-Industrial Tribute to Rob Zombie in 2002.

The music video of "More Human Than Human", the first music video made for a song off the album, features the band playing the track in a room and short clips of old home video footage of Rob, his brother, Michael Cummings (better known as Spider One of the band Powerman 5000), and a cousin at a young age. It was the first music video that had been completely directed by Rob alone. In 1995, Rob Zombie won the MTV Video Music Award for Hard Rock Video for the music video which he had directed himself. At the time, it was Rob's favourite White Zombie music video.

Listen to More Human Than Human

The following video clip relates to More Human Than Human by White Zombie:


Lyrics for More Human Than Human:

The following lyrics are the property of the respective authors, artists and labels. The lyrics to More Human Than Human are provided for educational and research purposes only. Please support White Zombie by purchasing relevant CD's or legal music downloads.

Yeah, I am the astro-creep,
A demolition style hell american freak - yeah
I am the crawling dead,
A phantom in a box, shadow in your head - say
Acid suicide - freedom of the blast,
Read the fucker lies - yeah
Scratch off the broken skin,
Tear into my heart,
Make me do it again

Yeah, I am the jigsaw man
I turn the world around with a skeleton hand - say
I am electric head,
A cannibal core,
A television said - yeah
Do not victimize,
Read the motherfucker-psychoholic lies - yeah
Into a psychic war,
I tear my soul apart and I eat it some more

Yeah, I am the ripper man,
A locomotion mind,
Love american style -yeah
I am the nexus one,
I want more life,
Fucker I aint done - yeah

An official website for White Zombie is listed at:

The following other websites are listed for White Zombie: