Welcome Frank.
There are 190 days remaining.

This music profile has been viewed 20901 times.

Frank Black's memories of a prominent serial killing case from his past become intensely vivid as he prepares to interview a murderer he locked away decades ago in order to catch that man's protégé, a copycat killer. Frank's concerns torture him day and night, giving him bizarre nightmares and a conscience which insists he should have killed the original killer when he was given the opportunity.

There are a total of 175 images for The Thin White Line which are available in our Episode Image Gallery. Johann Sebastian Bach (21 March 1685 - 28 July 1750) was a prolific German composer and organist whose sacred and secular works for choir, orchestra and solo instruments drew together the strands of the Baroque period and brought it to its ultimate maturity. Although he introduced no new forms, he enriched the prevailing German style with a robust contrapuntal technique, a control of harmonic and motivic organisation from the smallest to the largest scales, and the adaptation of rhythms and textures from abroad, particularly Italy and France. He is regarded as one of the greatest composers of all time.

Revered for their intellectual depth, technical command and artistic beauty, JS Bach's works include the Brandenburg concerti, the Goldberg Variations, the keyboard Suites and Partitas, the Mass in B Minor, the St Matthew Passion, The Musical Offering, The Art of Fugue, Sonatas and partitas for solo violin, Bourreacute;e in E minor the Six Suites for Unaccompanied Cello, and a large number of cantatas, of which about 220 survive. 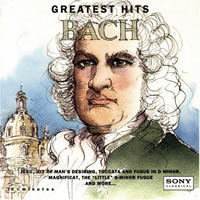 Scene:
"Little Fugue" in G Minor, BWV 578 can be heard during the following scenes in the Millennium episode The Thin White Line:

Heard throughout this episode's score.

Sorry, no official website exists or is currently stored for Johann Sebastian Bach. If you are aware of an official website for this artist, please contact us and we'll add it to this page.

Sorry, we do not currently have any other stored websites for Johann Sebastian Bach. If you are aware of a quality website for this artist, please contact us and we'll add it to this page.