This music profile has been viewed 11655 times.

When a psychopathic doctor once captured by Frank Black escapes his hospital bed after requiring an operation, the famed profiler is called to Washington D.C. to aid in his recapture. As Frank and Peter Watts uncover clues regarding the escape they're introduced to Lucy Butler, a mysterious and dangerous woman who indicates that dark forces have specific targets that are close to Frank's home and that evil itself has plans for Frank's life.

There are a total of 185 images for Lamentation which are available in our Episode Image Gallery. Pyotr (Peter) Ilyich Tchaikovsky, also transliterated Piotr Ilitsch Tschaikowski, Petr Ilich Tschaikowsky, Piotr Illyich Tchaikovsky, as well as many other versions, was a Russian composer of the Romantic era. He was born May 1840 and died 6 November 1893. Although not a member of the group of Russian composers usually known in English-speaking countries as 'The Five', his music has come to be known and loved for its distinctly Russian character as well as for its rich harmonies and stirring melodies. His works, however, were much more western than those of his Russian contemporaries as he effectively used international elements in addition to national folk melodies.


Where Pyotr (Peter) Ilyich Tchaikovsky can be heard in Lamentation 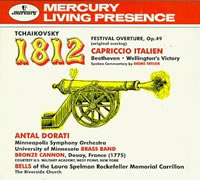 Scene:
Festival Overture "The Year 1812", Op.49; French Ouverture Solonelle 1812 (The Opening Theme) can be heard during the following scenes in the Millennium episode Lamentation:

Heard in the episode's score, during the scenes on Mount Baker, North Cascades, Washington.

The 1812 Overture (full title: Festival Overture "The Year 1812", Op.49; French Ouverture Solonelle 1812) is an orchestral work by Pyotr Ilyich Tchaikovsky commemorating the unsuccessful French invasion into Russia, and the subsequent devastating withdrawal of Napoleon's Grande Armeacute;e, an event that marked 1812 as the major turning point of the Napoleonic Wars. The work is best known for the sequence of cannon fire, which is sometimes performed, especially at outside festivals, using real cannon. When performed indoors, orchestras may use computer generated cannon sounds or huge barrel drums. Although the composition has no historical connection with the US-UK War of 1812, it is often performed in the US alongside other patriotic music; it is a staple at Fourth of July celebrations.

Tchaikovsky composed 1812 Overture, Op. 49 in 1880. This piece was reluctantly written by Tchaikovsky to commemorate the Russian victory over Napoleon in the Napoleonic Wars. It is known for its traditional Russian themes (such as the old Tsarist National Anthem) as well as its famously triumphant and bombastic coda at the end which uses 16 cannon shots and a chorus of church bells. Despite its popularity, Tchaikovsky wrote that he "did not have his heart in it".

The overture debuted in the Cathedral of Christ the Saviour in Moscow on August 20, 1882.

Sorry, no official website exists or is currently stored for Pyotr (Peter) Ilyich Tchaikovsky. If you are aware of an official website for this artist, please contact us and we'll add it to this page.

The following other websites are listed for Pyotr (Peter) Ilyich Tchaikovsky: