This page is an introduction to Wayne Kramer whose music was used during the Millennium episode Paper Dove. A complete list of all music by Wayne Kramer that was used throughout Millennium is also listed below.

This music profile has been viewed 8133 times.

The Black family travels to visit Catherine's parents in Maryland. Catherine's father asks Frank to look into an old local case that may have been resolved improperly the first time around. The murder in question may have in fact been committed by the Woodsman, a serial killer still depositing bodies in the Maryland woods. In investigating these events, Frank might inadvertently be pulling his family closer toward the intentions of the Polaroid stalker.

There are a total of 115 images for Paper Dove which are available in our Episode Image Gallery. Wayne Kramer (Born on April 30, 1948 in Detroit, Michigan) is an American guitarist. He co-founded the Detroit rock group MC5 (Motor City 5). The band played at Detroit's famous Grande Ballroom often and was managed by John Sinclair, a radical left-wing writer and co-founder of the White Panther Party until 1970 when Jon Landau took over creative management of the group. After MC5's demise, he spent several years committing crimes and battling drug addictions. In 1975, he was caught allegedly selling cocaine to undercover federal agents and went to prison for over two years at the Lexington Federal Prison in Lexington, Kentucky. While incarcerated he met Red Rodney, the American jazz trumpeter who had played with Charlie Parker's quintet. They played together in the institution's Sunday chapel.


Where Wayne Kramer can be heard in Paper Dove

Music from Wayne Kramer was used in a total of 1 episode/s of Millennium. Below is a complete list of all music by Wayne Kramer heard throughout the series and the episodes in which it was used, including links to the relevant music and episode profiles:

Upon his release from prison, he moved to New York City and briefly teamed up with Johnny Thunders. They formed the band Gang War. He also spent a large amount of the 1980s out of the music business. In 1994, he began a solo career and released numerous records, including 1995's "The Hard Stuff", which was produced by Don Was, a former acquaintance from the late 1960s Detroit rock scene. Kramer, along with the other surviving members of MC5, reformed in 1991 in a memorial concert for former lead singer Robin Tyner, who passed away from a heart attack. This sparked a reunion tour which spanned several years and included dates in Europe and America. They also recorded and played some shows with GG Allin. Wayne Kramer was also temporarily in the grunge band Mudhoney. He was recently interviewed for the VH1 show 'The Drug Years'.

The song used in Millennium's Paper Dove is Stranger in the House is from the album Citizen Wayne (1997).


Song 1: Stranger in the House 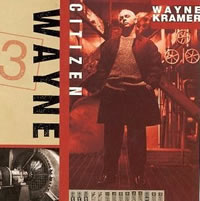 Scene:
Stranger in the House can be heard during the following scenes in the Millennium episode Paper Dove:

Heard in the opening episode teaser, when a woman, Amy Lee Walker, wheels her groceries to the parking lot and over to her car. Nearby is an old, dusty blue Ford Econoline. Music can be heard blasting from inside the van though its windows are all closed.

Listen to Stranger in the House

The following video clip relates to Stranger in the House by Wayne Kramer:


Lyrics for Stranger in the House:

The following lyrics are the property of the respective authors, artists and labels. The lyrics to Stranger in the House are provided for educational and research purposes only. Please support Wayne Kramer by purchasing relevant CD's or legal music downloads.


STRANGER IN THE HOUSE
(Kramer/Was)
©1997 Epitaph Records - All rights reserved.

Bigger Than A Monkey
Smaller Than A Mouse
Closer Than A Heartbeat
Baby There's A Stranger In The House.

No One Ever Told You There Was Money In The Bank
Or You Had To Fill Your Car With Gas.
You Thought You Heard The Thunder,
It Made You Start To Wonder,
Do You Think There's An Angel In Your Past?

Climbing Up A Mountain With A Barefoot Baby
And A Fifty Pound Lizard On Your Back
Nothing Can't Stop You
Nothing's Gonna Rock You
With A Totem Pole Missile In The Shack.

An official website for Wayne Kramer is listed at:

Sorry, we do not currently have any other stored websites for Wayne Kramer. If you are aware of a quality website for this artist, please contact us and we'll add it to this page.