The Carpenters - Beware of the Dog - Millennium Music Profile

This music profile has been viewed 13277 times.

Beware of the Dog

Frank travels to Bucksnort, a small town where residents fear for their lives outdoors after the sun goes down, when packs of blood-thirsty dogs roam the streets. Here he discovers that the Millennium Group and its members may be far stranger than is common knowledge and that there may be truth to legends of demons who took on the form of canines.

Still images from Beware of the Dog

There are a total of 100 images for Beware of the Dog which are available in our Episode Image Gallery. The Carpenters were a vocal and instrumental duo, consisting of siblings Karen and Richard Carpenter. With their brand of melodic pop, they charted a score of hit recordings on the American Top 40, becoming leading exponents of the soft rock or adult contemporary genre and ranking among the foremost recording artists of the decade. It has been estimated that The Carpenters' album and single sales total more than 100 million units, easily making them part of the list of best-selling music artists.


Where The Carpenters can be heard in Beware of the Dog

The Millennium episode Beware of the Dog contains the following music by The Carpenters:

Music from The Carpenters was used in a total of 2 episode/s of Millennium. Below is a complete list of all music by The Carpenters heard throughout the series and the episodes in which it was used, including links to the relevant music and episode profiles:

With their light, airy melodies and meticulously crafted, clean arrangements, the Carpenters stood in direct contrast with the excessive, gaudy pop/rock of the '70s; yet they became one of the most popular artists of the decade, scoring 12 Top Ten hits, including three number one singles.

Karen Carpenter's calm, pretty voice was the most distinctive element of their music, settling in perfectly amidst the precise, lush arrangements provided by her brother Richard. The duo's sound drew more from pre-rock pop than rock & roll, but that didn't prevent the Carpenters from appealing to a variety of audiences, particularly Top 40, easy listening, and adult contemporary. While their popularity declined during the latter half of the '70s, they remained one of the most distinctive and recognizable acts of the decade produced.

The Carpenters formed in the late '60s in Downey, CA, after their family moved from their native New Haven, CT. Richard had played piano with a cocktail jazz trio in a handful of local Connecticut nightclubs. Once the family had moved to California, he began to study piano while he supported Karen in a trio that featured Wes Jacobs (tuba/bass). With Jacobs and Richard forming her backup band, Karen was signed to the local Californian record label Magic Lamp, who released two unsuccessful singles by the singer. The trio won a Battle of the Bands contest at the Hollywood Bowl in 1966, which led to a record contract with RCA. Signing under the name the Richard Carpenter Trio, the group cut four songs that were never released. Jacobs left the band at the beginning of 1968.

Following Jacobs' departure, the siblings formed Spectrum with Richard's college friend John Bettis. Spectrum fell apart by the end of the year, but the Carpenters continued performing as a duo. The pair recorded some demos at the house of Los Angeles session musician Joe Osborn; the tape was directed toward Herb Alpert, the head of A&M Records, who signed the duo to his record label in early 1969.

Offering, the Carpenters' first album, was released in November 1969. Neither Offering or the accompanying single, a cover of the Beatles' "Ticket to Ride," made a big impression. However, the Carpenters' fortunes changed with their second single, a version of Burt Bacharach and Hal David's "(They Long to Be) Close to You." Taken from the album Close to You, the single became the group's first number one, spending four weeks on the top of the U.S. charts. "Close to You" became an international hit, beginning a five-year period where the duo was one of the most popular recording acts in the world. During that period the Carpenters won two Grammy Awards, including Best New Artist of 1970, and had an impressive string of Top Ten hits, including "Rainy Days and Mondays," "Superstar," "Hurting Each Other," "Goodbye to Love," "Yesterday Once More," and "Top of the World."

After 1975's number-four hit "Only Yesterday," the group's popularity began to decline. For the latter half of the '70s, the duo were plagued by personal problems. Richard had become addicted to prescription drugs; in 1978, he entered a recovery clinic, kicking his habit. Karen, meanwhile, became afflicted with anorexia nervosa, a disease she suffered from for the rest of her life. On top of their health problems, the group's singles had stopped reaching the Top Ten and by 1978, they weren't even reaching the Top 40. Consequently, Karen decided to pursue a solo career, recording a solo album in 1979 with Phil Ramone; the record was never completed and she returned to the Carpenters later that year. The reunited duo released their last album of new material, Made in America, in 1981. The album marked a commercial comeback, as "Touch Me When We're Dancing" made it to number 16 on the charts. However, Karen's health continued to decline, forcing the duo out of the spotlight. On February 4, 1983, Karen was found unconscious at her parents' home in Downey; she died in the hospital that morning from a cardiac arrest, which was caused by her anorexia.

After Karen's death, Richard Carpenter concentrated on production work and assembling various compilations of the Carpenters' recorded work. In 1987, he released a solo album called Time, which featured guest appearances by Dusty Springfield and Dionne Warwick. 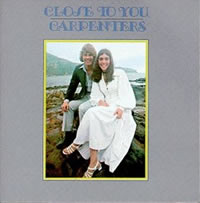 Scene:
(They Long To Be) Close To You can be heard during the following scenes in the Millennium episode Beware of the Dog:

Heard in the opening episode teaser. A two-tailed comet flies in the night sky. An RV is being driven along a darkened country road. The music of the Carpenters' "Close to You" is playing. Inside the RV is an elderly couple, Paul and Mary Anne Lombardo, plus their small Pomeranian. Paul is driving drowsily while Mary Anne strokes the dog in her lap. The dog yawns. A car passes in the opposite direction, its bright headlights startling Paul into full wakefulness.

In 1965, Dionne Warwick released her version. Again, this side of the single lost out in terms of popularity to its flip side, and "Here I Am" became the hit.

In 1970, it was released by The Carpenters, and became their breakthrough hit. The song hit number one on the Billboard Hot 100 for four weeks. Rolling Stone's "Songs of the Century" rated it #193. In Cash Box magazine, "Close to You" was #1 on August 1 and August 8.

In 1972, the song again became a hit when recorded by Jerry Butler and Brenda Lee Eager. It went to #6 on Billboard's R&B chart.

The song has been recorded by many other artists, including The Cranberries, Barenaked Ladies, Les Mouches and Hikaru Utada.

Close to You was the second album by The Carpenters, released in August 1970. In 2003, the album was ranked number 175 on Rolling Stone magazine's list of the 500 greatest albums of all time. This is one of their bigger efforts with the hit singles "(They Long To Be) Close To You" and "We've Only Just Begun". This was the duets first big hit and put them on the map for some time to come.

Listen to (They Long To Be) Close To You

The following video clip relates to (They Long To Be) Close To You by The Carpenters:

An official website for The Carpenters is listed at:

Sorry, we do not currently have any other stored websites for The Carpenters. If you are aware of a quality website for this artist, please contact us and we'll add it to this page.