This music profile has been viewed 10903 times.

A Single Blade of Grass

Frank Black gets himself into some trouble as he travels to investigate a recent murder near an excavation site of Native American Indian tribe artifacts in the middle of New York City. Here he finds a hidden tribe of men that have come together to spout ancient prophecies and legends, some regarding a man with powerful visions who can be the one to link the spiritual world with the world of reason.

Still images from A Single Blade of Grass

There are a total of 100 images for A Single Blade of Grass which are available in our Episode Image Gallery. 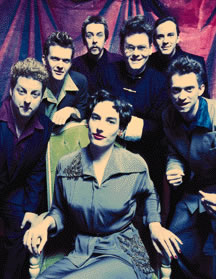 Squirrel Nut Zippers was a U.S. Jazz band formed in 1993, who applied punk's DIY aesthetic to early 20th century American popular music. The band's name comes from the Squirrel Brand's Nut Zippers, a peanut and caramel candy for sale since the mid-20s. The Zippers had a handshake agreement with the owner of the Squirrel Nut Zipper candy company to use the name. After the owner died, Southern Style Nuts acquired the company and sued the band.

The Millennium episode A Single Blade of Grass contains the following music by Squirrel Nut Zippers:

Music from Squirrel Nut Zippers was used in a total of 1 episode/s of Millennium. Below is a complete list of all music by Squirrel Nut Zippers heard throughout the series and the episodes in which it was used, including links to the relevant music and episode profiles:

The band was founded by Jim "Jimbo" Mathus, formerly of Metalflake Mother and Johnny Vomit & The Dry Heaves, and his then-wife Katharine Whalen in Carrboro, North Carolina along with Ken Mosher, Don Raleigh and Chris Phillips. The group made its live debut in Chapel Hill a few months later. Tom Maxwell joined in January, 1994, bringing in Stacy Guess (formerly of Pressure Boys and Sex Police). The band was initially lumped into the "lounge" movement, along with Combustible Edisons, then later credited with starting the brief swing music revival of the 1990s. Unlike such bands as Cherry Poppin' Daddies and Big Bad Voodoo Daddy, who mostly synthesized jump blues and a Gene Krupa backbeat, the Zippers defied description, incorporating everything from Harlem Hot Music, Cab Calloway, Johnny Ace, Delta Blues, Raymond Scott, Fats Waller, Django Reinhardt, Tom Waits, and klezmer. Maxwell's "Hell," their biggest (and only) hit single, peaking at number 13, was calypso music in the tradition of 1930s artists such as Lord Executor and The Growler. The band's lyrics sometimes referenced William Faulkner or quoted 2,000 year old Chinese poetry. As Hell was the only song that got real airtime, they are mostly considered a one-hit wonder, although they do have a strong cult following.

The band's first album, The Inevitable (1995), garnered the attention of National Public Radio, which was the bands first source of wide spread, lasting acclaim. Their second album, Hot (1996), caught the attention of the modern music scene. It was certified platinum (1,000,000 unit shipped) in the Fall of 1997. The "Hot" album was one of the first ECDs - an "enhanced" audio CD containing an interactive presentation created by filmmaker Clay Walker. Perennial Favorites (1998) also received critical acclaim and achieved substantial sales. The band recorded "Bedlam Ballroom" in 1999 after touring the previous records extensively.

To date, the Zippers catalog has sold in excess of two and a half million units.

The Squirrel Nut Zippers spent the summer of 1997 outselling the likes of U2 and Aerosmith and touring with Neil Young. They performed at the 1996 Summer Olympics in Atlanta, on Prairie Home Companion, President Clinton's second inaugural ball, Comedy Central's Viva Variety, and major television shows: The Tonight Show, Late Night with David Letterman, Conan O'Brian and Dick Clark's New Year's Rockin' Eve in 1998.

The band has performed in a segment on Sesame Street, where they are playing in a lounge while teasing Fat Blue.

The band had recorded a version of Under The Sea which was going to be included on the DVD release of The Little Mermaid, but Disney decided against it. Disney had purchased Mammoth Records just months prior to this recording. The song was eventually released on the band's greatest hits CD.

Maxwell's song "Put A Lid On It" was in a 1999 Intel Super Bowl commercial and features prominently in Contact (musical). Although many criticized the show for its lack of original music, it was also widely acclaimed and won the 2000 Tony Award for Best Musical.

The song "Hell" is central to the pilot episode of the Showtime series Dead Like Me, and was the main title of the late, lamented A&E series Family Plots.

Movies have licensed the Zippers' catalog extensively, including Flirting with Disaster, Blast from the Past and most recently the animated feature film Happily Never After licensed the Bedlam Ballroom song Baby Wants a Diamond Ring. 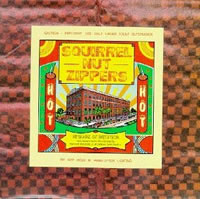 Scene:
Hell can be heard during the following scenes in the Millennium episode A Single Blade of Grass:

Heard during the Morgue scene. The Coroner is dancing around and humming along with the music. Frank enters, startling her:

[Frank switches off the music.]

The following lyrics are the property of the respective authors, artists and labels. The lyrics to Hell are provided for educational and research purposes only. Please support Squirrel Nut Zippers by purchasing relevant CD's or legal music downloads.

People listen attentively
I mean about future calamity
I used to think the idea was obsolete
Until I heard the old man stamping his feet.

This is a place where eternally
Fire is applied to the body
Teeth are extruded and bones are ground
Then baked into cakes which are passed around.

Beauty, talent, fame, money, refinement
Top skill and brain
But all the things you try to hide
Will be revealed on the other side.

Now the d and the a and the m
And the n and the a
And the t and the i-o-n
Lose your face, lose your name
Then get fitted for a suit of flame

An official website for Squirrel Nut Zippers is listed at:

Sorry, we do not currently have any other stored websites for Squirrel Nut Zippers. If you are aware of a quality website for this artist, please contact us and we'll add it to this page.