This music profile has been viewed 16247 times.

Still images from The Curse of Frank Black

There are a total of 145 images for The Curse of Frank Black which are available in our Episode Image Gallery. Jalacy Hawkins, best known as Screamin' Jay Hawkins (July 18, 1929 - February 12, 2000) was an African-American singer famed for his wildly theatrical performances of songs like "I Put a Spell on You" and "Constipation Blues".

The Millennium episode The Curse of Frank Black contains the following music by Screamin' Jay Hawkins:

Born and raised in Cleveland, Ohio, Hawkins originally set out to become an opera singer, and has cited Paul Robeson and Enrico Caruso as early influences. When his initial ambitions failed, he began his career as a conventional blues singer and pianist.

He served in the U.S. Army in the Pacific Ocean during World War II, primarily as an entertainer, although he claimed to have been a POW. Hawkins was an avid and formidable boxer: in 1949, he was the middleweight boxing champion of Alaska.

In 1951, he joined guitarist Tiny Grimes for a while, and recorded a few songs with him. When Hawkins became a solo performer, he often performed in a very stylish wardrobe, featuring leopard skins, red leather and wild hats.

His most successful recording, "I Put a Spell on You" (1956), remains one of rock and roll's singular most significant compositions, and has been selected as one of The Rock and Roll Hall of Fame's 500 Songs that Shaped Rock and Roll.

Hawkins had several further hits, including "Constipation Blues", "Orange Colored Sky", and "Feast of the Mau Mau". Nothing he released, however, had the massive success of "I Put a Spell on You".

He continued to tour and record through the 1960s and 1970s, particularly in Europe, where he was very popular, but his career was not advancing in America until filmmaker Jim Jarmusch featured "I Put a Spell on You" on the soundtrack and deep in the plot of his film Stranger Than Paradise (1983) and then Hawkins himself as a hotel night clerk in his Mystery Train. This led to a few other movie performances, such as Álex de la Iglesia's Perdita Durango and Bill Duke's adaptation of Chester Himes' A Rage In Harlem.

His 1957 single "Frenzy" (found on the early 1980s compilation of the same name) was included in the compilation CD, "Songs in the Key of X: Music From And Inspired By The X-Files", in 1996. This song was featured in the show's season 2 episode "Humbug".

In July 1991 Hawkins released his album Black Music for White People. The record features covers of two Tom Waits compositions; "Heart Attack and Vine" (which, later that year, was used in a European Levi's advertisement without Waits' permission, resulting in a lawsuit,) and "Ice Cream Man" (which, contrary to popular belief, is a Waits original, and not a cover of the John Brim classic.)

Hawkins also toured with The Clash and Nick Cave during this period, and also became a fixture not only of blues festivals, but also appeared at many film festivals.

His performance style earned him a loyal following - the use of a skull, a moving arm and - in his early days - a coffin added to his charisma.

Hawkins died on February 12, 2000, leaving behind many children by many women; about 55 were known (or suspected) upon his death, and upon investigation, that number is believed to be many more. 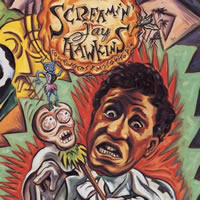 Scene:
Little Demon can be heard during the following scenes in the Millennium episode The Curse of Frank Black:

Heard when Frank Black is driving his Jeep and his Bobby Darin CD fails to play (DVD time stamp 12m 50s). Frank tunes the radio into AM826 and Little Demon begins to play.

It can be heard a second time in this episode, The Curse of Frank Black when Frank is back home and his portable CD Player starts to play Little Demon despite having no CD or batteries inside (DVD time stamp 29 minutes).

The following lyrics are the property of the respective authors, artists and labels. The lyrics to Little Demon are provided for educational and research purposes only. Please support Screamin' Jay Hawkins by purchasing relevant CD's or legal music downloads.


Down in the valley on a foggy hill rock,
stood a crazy little demon blowin' his top.
Fire in his eyes and smoke from his head,
you gotta be real cool to hear the words he said.
He did a...Mop-mop-mop-mmm-mop-mmm-mop-mmm...That cat was mad!

He had steam in his soul for the one he loves so,
He had death on his mind, 'cause Miss Demon let him go.
Gonna run through the world till he understands his pain,
Somebody help him get Miss Demon home again. He did a... Mop-mop-mop-mmm-mop-mmm-mop-mmm...That cat was mad!

He made the sky turn green, he made the grass turn red,
He even put pretty hair on grandma's bald head.
He made the moon back up, he even pushed back time,
Took the tutti out of frutti, had the devil drinkin' wine. He did a...
Miss Demon felt good, 'cause she finally got across,
To the crazy little demon that a woman's still the boss.
Down in the valley on a foggy hill rock,
You can still here the demon blowin' his top. He did a... Mop-mop-mop-mmm-mop-mmm-mop-mmm...That cat was mad!

He pushed back night, brought in afternoon,
He even made leap the itch up over the moon.
He took the fourth of July and he put it in May,
He took this morning, brought back yesterday. He did a... Mop-mop-mop-mmm-mop-mmm-mop-mmm...That cat was mad!

Sorry, no official website exists or is currently stored for Screamin' Jay Hawkins. If you are aware of an official website for this artist, please contact us and we'll add it to this page.

Sorry, we do not currently have any other stored websites for Screamin' Jay Hawkins. If you are aware of a quality website for this artist, please contact us and we'll add it to this page.