This music profile has been viewed 10156 times.

Still images from Midnight of the Century Pyotr (Peter) Ilyich Tchaikovsky, also transliterated Piotr Ilitsch Tschaikowski, Petr Ilich Tschaikowsky, Piotr Illyich Tchaikovsky, as well as many other versions, was a Russian composer of the Romantic era. He was born May 1840 and dies 6 November 1893. Although not a member of the group of Russian composers usually known in English-speaking countries as 'The Five', his music has come to be known and loved for its distinctly Russian character as well as for its rich harmonies and stirring melodies. His works, however, were much more western than those of his Russian contemporaries as he effectively used international elements in addition to national folk melodies.

The Millennium episode Midnight of the Century contains the following music by Pyotr (Peter) Ilyich Tchaikovsky: 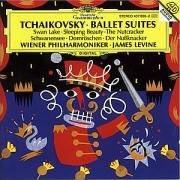 Scene:
The Nutcracker Suite, Op.71: d. Danse arabe. Allegretto (Arabian Dance) can be heard during the following scenes in the Millennium episode Midnight of the Century:

Heard during the episode's score.

In Western countries, this ballet has become among the most popular ballets performed, primarily around Christmas time.

A selection of eight of the more popular numbers from the ballet was made by the composer before the ballet's premiere, forming The Nutcracker Suite, Op. 71a, intended for concert performance. The suite became instantly popular; the complete ballet did not achieve its great popularity until around the mid-1960's.

Sorry, no official website exists or is currently stored for Pyotr (Peter) Ilyich Tchaikovsky. If you are aware of an official website for this artist, please contact us and we'll add it to this page.

The following other websites are listed for Pyotr (Peter) Ilyich Tchaikovsky: