This music profile has been viewed 12052 times.

Frank Black and Peter Watts call in Millennium Group computer expert Brian Roedecker for assistance on a very serious case when they find a serial killer who broadcasts his gruesome crimes over the internet to a bevy of sick spectators. Is this the work of Avatar, a sadistic killer Frank's tracked before, utilizing a brand new technological medium for his crimes?

Still images from The Mikado

There are a total of 145 images for The Mikado which are available in our Episode Image Gallery. The Zodiac Killer murdered at least seven people in the San Francisco Bay area between 1966 and 1970. His letters to police and the media often quoted The Mikado. The second-season episode of Millennium titled "The Mikado" is based on the Zodiac case.


Where Gilbert and Sullivan can be heard in The Mikado

The Millennium episode The Mikado contains the following music by Gilbert and Sullivan:

Music from Gilbert and Sullivan was used in a total of 1 episode/s of Millennium. Below is a complete list of all music by Gilbert and Sullivan heard throughout the series and the episodes in which it was used, including links to the relevant music and episode profiles:

About Gilbert and Sullivan

The Gilbert and Sullivan works have enjoyed broad and enduring international success, particularly in the English-speaking world. H.M.S. Pinafore, The Pirates of Penzance and The Mikado, in particular, introduced innovations in content and form that directly influenced the musical theatre of the 20th century. Their works have become known as the Savoy Operas, after the Savoy Theatre in London, which was built in 1881 by their producer, Richard D'Oyly Carte, to present their operas.

Gilbert, who wrote the words, created fanciful worlds for these operas, where an absurdity is taken to its logical conclusion. In these worlds fairies rub elbows with English lords, flirting is a capital offence, gondoliers ascend to the monarchy, and pirates turn out to be noblemen who have gone wrong. The lyrics employ double (and triple) rhyming and punning, and served as a model for such 20th century Broadway lyricists as P.G. Wodehouse, Cole Porter, Ira Gershwin, and Lorenz Hart. Sullivan, the composer, who also wrote many hymns, oratorios, part songs and orchestral works, contributed tuneful and memorable melodies that could convey both humour and pathos, and his musical ingenuity and craft equalled or surpassed that of many important classical composers.

Gilbert and Sullivan sometimes had a strained working relationship, partly caused by the fact that each man saw himself allowing his work to be subjugated to the other's, and partly caused by the opposing personalities of the two - Gilbert was often confrontational and notoriously thin-skinned (though prone to acts of extraordinary kindness), while Sullivan eschewed conflict. In addition, Gilbert imbued his libretti with "topsy-turvy" situations in which the social order was turned upside down. After a time, these subjects were often at odds with Sullivan's desire for realism and emotional content. In addition, Gilbert's political satire often poked fun at those in the circles of privilege, while Sullivan was eager to socialize among the wealthy and titled people who would become his friends and patrons.

For over a century, until it closed in 1982, the D'Oyly Carte Opera Company performed the Gilbert and Sullivan operas (controlling the British copyrights to the works until 1961) and exercised great influence over the style and traditions for performing these works. Today, many cities, churches, schools, and universities have their own amateur Gilbert and Sullivan performing groups. The most popular G&S works are also performed from time to time by major opera companies, and there are a number of professional repertory companies that specialize in G&S. In addition, every summer, there is a 3 week-long International Gilbert and Sullivan Festival in Buxton, England. 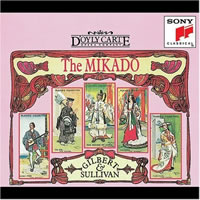 Scene:
Behold, The Lord High Executioner - (Ko-Ko and Men) The Mikado Operetta (Act 1.5) can be heard during the following scenes in the Millennium episode The Mikado:

Heard when Roedecker decrypts the sound file and afterwards when Frank listens to a higher quality CD version. It can also be heard when Frank is carefully checking out the interior of the theatre for the female victim. He sees a framed poster on a nearby wall. It's for The Mikado. Then music starts - trumpets, the opening bars of music from The Mikado. The music continues as he pursues Avatar.

The Mikado, or The Town of Titipu, is a comic opera in two acts, with music by Arthur Sullivan and libretto by W. S. Gilbert, their ninth of fourteen operatic collaborations. It opened on March 14, 1885, in London, where it ran at the Savoy Theatre for 672 performances, which was unprecedented for musical theatre pieces, and one of the longest runs of any theatre piece up to that time. Before the end of 1885 it was estimated that, in Europe and America, at least 150 companies were producing the opera. The Mikado remains the most frequently performed Savoy Opera, and it is especially popular with amateur and school productions. Indeed, The Mikado is one of the most frequently played musical theatre pieces in history.

Setting the opera in Japan, an exotic locale far away from England, allowed Gilbert to satirize English politics and institutions more freely by disguising them as Japanese. Gilbert used foreign locales in several operas, including The Mikado, The Gondoliers, Utopia Limited, The Grand Duke and Princess Ida, to soften the impact of his pointed satire of British institutions.

The Mikado is a comedy that deals with themes of death and cruelty. This works only because Gilbert treats these themes as trivial issues. For instance, in Pish-Tush's song "Our great Mikado, virtuous man", he sings: "The youth who winked a roving eye/Or breathed a non-connubial sigh/Was thereupon condemned to die--/He usually objected." The term for this rhetorical technique is litotes, a drastic understatement of the situation. Other examples are when Pooh-Bah calls Ko-Ko, the Lord High Executioner, an "industrious mechanic". Later, self-decapitation is described as "an extremely difficult, not to say dangerous, thing to attempt", and also "awkward". When a discussion occurs of Nanki-Poo's life being "cut short" in "Brightly dawns our wedding day", the tone remains comic and only mock-melancholy. Finally, Burial alive is described as "a stuffy death".

All this has the effect of making death seem like a perfectly normal and businesslike event. Ko-Ko treats his bloody office as a profession, such as accounting or plumbing, and says "I can't consent to embark on a professional operation unless I see my way to a successful result." The audience becomes inured to the subject matter and treats these themes as jokes. Ko-Ko's final speech affirms that death has been, throughout the opera, a fiction, a matter of words that can be dispelled with a phrase or two: being dead and being "as good as dead" are equated.

The following video clip relates to Behold, The Lord High Executioner - (Ko-Ko and Men) The Mikado Operetta (Act 1.5) by Gilbert and Sullivan:

Sorry, we do not currently have any other stored websites for Gilbert and Sullivan. If you are aware of a quality website for this artist, please contact us and we'll add it to this page.