Mark Snow - Somehow, Satan Got Behind Me - Millennium Music Profile

This page is an introduction to Mark Snow whose music was used during the Millennium episode Somehow, Satan Got Behind Me. A complete list of all music by Mark Snow that was used throughout Millennium is also listed below.

This music profile has been viewed 16554 times.

Somehow, Satan Got Behind Me

Four vile demons, servants of evil who pose as elderly men, gather for their nightly meeting in a downtown donut shop and discuss over coffee and crullers their own personal methods of leading humanity down the path to hell. During the discussion they come to the realization that they've all encountered a gifted man who may have seen them for the demons they truly are: Frank Black.

Still images from Somehow, Satan Got Behind Me

There are a total of 170 images for Somehow, Satan Got Behind Me which are available in our Episode Image Gallery.

Music by Mark Snow used in the Millennium episode Somehow, Satan Got Behind Me 
Where Mark Snow can be heard in Somehow, Satan Got Behind Me

The Millennium episode Somehow, Satan Got Behind Me contains the following music by Mark Snow: 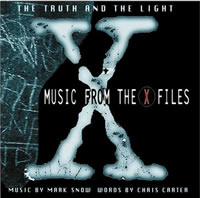 Scene:
Materia Primoris: The X-Files Theme can be heard during the following scenes in the Millennium episode Somehow, Satan Got Behind Me:

Heard during a parody as background music when two gray aliens with Uzi automatic weapons burst into Mulder and Scully's alien autopsy.