This page is an introduction to Kiss whose music was used during the Millennium episode ...Thirteen Years Later. A complete list of all music by Kiss that was used throughout Millennium is also listed below.

This music profile has been viewed 14557 times.

To Frank Black's dismay, a movie is being shot based upon an infamous serial killer case he himself solved 13 years ago. Things get a little out of hand when new murders begin occurring with the same pattern featured in the film and case files. Frank hopes to find the answers during the filming of the movie's finale, at a KISS concert, while Emma searches famous horror films for clues.

There are a total of 205 images for ...Thirteen Years Later which are available in our Episode Image Gallery. Kiss (sometimes typeset "KISS", to fit the official logo) is an American rock band formed in New York City in 1973. Easily identified by their trademark face paint and stage outfits, the group rose to prominence in the mid-1970s on the basis of their elaborate live performances, which featured firebreathing, blood spitting, smoking guitars, and pyrotechnics. Kiss have been awarded 22 gold albums to date, and have certified sales of 19 million records in the United States. The group's worldwide sales exceed 80 million albums.


Where Kiss can be heard in ...Thirteen Years Later

Music from Kiss was used in a total of 1 episode/s of Millennium. Below is a complete list of all music by Kiss heard throughout the series and the episodes in which it was used, including links to the relevant music and episode profiles:

The original lineup of Gene Simmons (bass and vocals), Paul Stanley (rhythm guitar and vocals), Ace Frehley (lead guitar and vocals) and Peter Criss (drums and vocals) is the most successful and identifiable. With their makeup and costumes, they took on the personas of comic book-style characters - the Demon (Simmons), the Star Child (Stanley), the Space Ace (Frehley), and the Cat Man (Criss). Due to substance abuse problems and creative differences, both Criss and Frehley were out of the group by 1982. The band's commercial fortunes had also waned considerably by that point.

In 1983, Kiss abandoned their makeup and enjoyed a commercial resurgence throughout the rest of the decade. Buoyed by a wave of Kiss nostalgia in the 1990s, the band announced a reunion of the original lineup (with makeup) in 1996. The resulting Kiss Alive/Worldwide Tour was the top-grossing act of 1996. Criss and Frehley have since left Kiss again, and have been replaced by Eric Singer and Tommy Thayer, respectively. The band continues to perform, while Stanley and Simmons have remained the only two constant members. 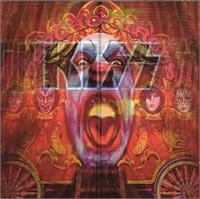 Scene:
Psycho Circus can be heard during the following scenes in the Millennium episode ...Thirteen Years Later:

Heard when it is performed by KISS on stage.

"Psycho Circus" is a song by the American hard rock band Kiss. It is the title track from the 1998 album with the same name. The b-side is the non-album track "In Your Face", a song written by Kiss bassist/vocalist Gene Simmons and sung by lead guitarist Ace Frehley.

"Psycho Circus" was written by guitarist/vocalist Paul Stanley and collaborator Curt Cuomo specifically to fit the theme of the Psycho Circus Tour and album. According to producer Bruce Fairbairn, "We didn't have an opener for the record. We didn't have anything that was going to start things off. And [Paul] just looked at me and said, 'check this. This is it...' We both sat there and looked at each other and started to laugh. Because that was it".

A video was made to promote the single, which was made in the same 3-D theme as the album and tour, and was directed by James Hurlburt and produced by Doc McGhee and Eddie Vasker. The video was ignored by MTV.

As a single, the song did not make an appearance in the Billboard Hot 100 in the United States, although it would prove to be a Top Ten hit in other countries in the world, including Canada and Norway.

The song would open sets for the band on the Psycho Circus Tour to support the album, and was performed on Kiss's live album Kiss Symphony: Alive IV in 2003.

"Psycho Circus" was nominated for a Grammy Award in 1999 for best Hard Rock Performance, although they lost out to Jimmy Page and Robert Plant as their track "Most High" got the award.

"I shot a whole music video with Kiss during that episode. We were going to cut it as a music video. In fact, Kiss wanted it done as a music video for them. The material that we shot - it was terrific... We shot it in half a day, their music number, and it was pretty wild, but it was fun. It was a lot of fun. They were great."

The following video clip relates to Psycho Circus by Kiss:

The following lyrics are the property of the respective authors, artists and labels. The lyrics to Psycho Circus are provided for educational and research purposes only. Please support Kiss by purchasing relevant CD's or legal music downloads.


YEAHHHHHHHHHHHHH!!!!!!!!
Hello
Here I am!
Here we are,we are one
I've been waiting for this night to come
Get up!
Now it's time for me to take my place
The make-up runnin' down my face
We're exiled from the human race.

I've been waiting here to be your guide
So come
Reveal the secrets that you keep inside
Step up!
No one leaves 'til the night is done
The amplifier starts to hum
The carnival has just begun.

I, I've been waiting here to be your guide
Some come
Reveal the secrets that you keep inside
Step up!
No one leaves 'til the night is done
The amplifier starts to hum
The carnival has just begun.

Sorry, we do not currently have any other stored websites for Kiss. If you are aware of a quality website for this artist, please contact us and we'll add it to this page.