This music profile has been viewed 25652 times.

Frank Black, for the third time in his life, ends up on the receiving end of a series of disturbing Polaroid photographs. This time, however, he begins questioning his own sanity, for the digitally enhanced photos depict the victim of a horrible drowning accident and the face in the Polaroids is his own. Is a ruthless demon seeking to push him over the edge into madness? Frank's painful childhood memories and the FBI's opinions that he is a crazed man make it all the more difficult for him to confront the evil attempting to ruin him.

Still images from Seven and One

There are a total of 275 images for Seven and One which are available in our Episode Image Gallery. The Backstreet Boys are a Grammy-nominated male vocal pop group that enjoyed enormous success in the mid-late 1990s and 2000s. They have charted 12 U.S Top 40 hits on the Billboard Hot 100, 16 U.K. Top 10 hits and have won numerous awards, making them the highest selling boyband of all-time. Since returning to the music scene in 2005, their sound changed drastically, incorporating only live instruments (some of which they play themselves) and a rock edge. The now four-member group consists of Nick Carter, Howie Dorough, Brian Littrell, and A.J. McLean; original member Kevin Richardson left the group on June 23, 2006.


Where Backstreet Boys can be heard in Seven and One

The Millennium episode Seven and One contains the following music by Backstreet Boys:

Music from Backstreet Boys was used in a total of 1 episode/s of Millennium. Below is a complete list of all music by Backstreet Boys heard throughout the series and the episodes in which it was used, including links to the relevant music and episode profiles:

Lou Pearlman, an aviation entrepreneur based in Florida, was inspired by the success of the New Kids On The Block in the 1980s to create his own clean-cut band. After a series of auditions in 1992 and 1993, he recruited Nick Carter (at 12, the band's youngest member), Howie Dorough, 19, Alexander James McLean, 14 and following the departure of two members - Sam Licata (later performing as Phoenix Stone) and Charles Edwards - Kevin Richardson came aboard in March 1993, who was 21. The group took its final shape on April 19, 1993, when Brian Littrell, cousin of Richardson, joined the group after a phone audition. Their first concert, on May 8, 1993, was performed for 3,000 teenagers at SeaWorld in Orlando, Florida. Pearlman later booked them at grade-school assemblies and shopping malls, and assigned management duties to Johnny Wright, who had worked with New Kids on the Block.

After a possible Mercury Records deal failed,[citation needed] the band was spotted in Cleveland, Ohio by Jive Records, an independent label best known for its hip-hop and pop acts, in February 1994. By June, they were recording their first single; an urban pop song by writer/producer Denniz PoP called "We've Got It Goin' On". The single struggled in the US and reached only #69 on the Billboard charts; but it sold well in Europe, later earning the band their first Gold record in Germany. In the summer of 1996, the band's first self-titled album was released in Europe and Canada, going gold within weeks in Europe. Jive and Pearlman kept the band busy overseas for the next two years, sometimes putting on tours for five straight months.

European popularity grew, and the Backstreet Boys kicked off 1996 being voted the No.1 International Group by TV viewers in Germany - "I'll Never Break Your Heart" went gold there and hit No.1 in Austria. The group earned their first Platinum record in Germany and toured Asia and Canada.

By 1997, pop music was returning to the forefront in United States, with the likes of the Spice Girls. Jive and Pearlman decided to bring the boys back to their home country after 8.5 million discs had been sold worldwide.[2] They began recording their second album, Backstreet's Back, releasing "Quit Playing Games With My Heart" in August, coinciding with the release of their second international album, the band released a self-titled album in the US which collected songs from both international albums. They hit big on the U.S. charts with both releases, debuting at #1 in Germany, Norway, Switzerland, Finland and Austria, and sold over 24 million copies worldwide (14 million copies in the U.S.)[citation needed] In December 1997, the band embarked on a 60-city, 20-country tour.

In 1997, Littrell (soon joined by McLean, Richardson and Dorough) brought a lawsuit against Lou Pearlman, in which they claimed that Pearlman had hidden and misused money earned by the band. The case was settled in 1998.[1]

In 1998, Littrell underwent open heart surgery in the middle of their sold-out US 39-city tour, at the insistence of his then girlfriend (and now wife) Leighanne Wallace; he had twice postponed the surgery in the past. He had been struggling with a heart murmur since he was born, almost dying at the age of 4 due to a bacterial infection. Littrell needed about 8 weeks to recover from the surgery. Shortly after, the Backstreet Boys cancelled an appearance in Minnesota after learning that Howie Dorough's sister had died of lupus. In October 1998, the band received the keys to the city from the mayor of Orlando in honor of the tornado relief concert the group headlined in March.

On February 17, 1999, the Boys received their first Diamond award from the RIAA for shipment of 10 million copies of their self-titled album. At that time, they had hired a new manager team called "The Firm", famous for managing bands including Limp Bizkit and Korn. Along with their new management team, the Backstreet Boys sued Pearlman several more times, until he renegotiated the settlement on terms more favorable to the band. Executives of the Firm stated that the Backstreet Boys had bought out Pearlman's stake in the band, but he denied this.

On May 18, 1999, the Backstreet Boys released the album Millennium, which sold over 1.13 million units in its first week, setting, at the time, a record for first week sales, until April 2000, when 'N Sync's sophomore album, No Strings Attached sold 2.4 million units in its first week. The album also recorded the most sales for an album's second and third weeks. Rolling Stone reports that sales might have been bigger if some stores had not run out of CDs. The album dominated the worldwide charts, landing at the #1 spot in 25 nations[citation needed]. It was certified 11 times platinum on December 22, 1999, and went on to sell over 34 million copies worldwide.[4] The first single "I Want It That Way" was a significant hit, reaching the #1 spot in over 18 countries. In addition to receiving gold and platinum awards in 45 countries, the band's sophomore album was nominated for 5 Grammy Award's including Album of the Year. In August, the Backstreet Boys sold out a 39-city tour in less than a day, selling over 765,000 tickets in a matter of hours, prompting additional shows in many markets and shattering a number of box-office records selling out all 53 concert dates of their Into The Millennium Tour which kicked off in September. The tour drew over 2 million fans, breaking the record for largest indoor audience.

Impressed by the success of the Backstreet Boys, Sony BMG, which already owned 20 percent of Jive's parent company, purchased a remainder for $3 billion, the most ever paid for an independent record company. In the meantime, The Firm negotiated tens of millions of dollars in advance payments for recordings and performances from Jive and the concert promoter Clear Channel. Also by the end of 1999, the Backstreet Boys faced new problems declaring their current Jive contract null and void, soon striking one of the largest record deals ever valued at $60 million with Jive.

In 2000, the Backstreet Boys graced the pages of the new millennium's first issue of Rolling Stone magazine. Burger King made a deal with the boys for tour sponsorship, videos, and CDs with unreleased live tracks that were available for sale at Burger King restaurants in August and September. In February, Littrell and Richardson confirmed their engagements to their fianceacute;es. 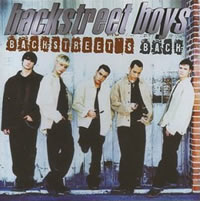 Scene:
Everybody (Backstreet's Back) can be heard during the following scenes in the Millennium episode Seven and One:

Heard as the background music for Jordan's birthday party.

The music video for Everybody (Backstreet's Back) is unusual as it is a horror film spoof, not unlike Thriller by Michael Jackson. The band members spend a night at a haunted house (at the insistence of their driver) when their bus breaks down and subsequently are morphed into various monsters, such as a werewolf (Brian), Dracula (Howie), a mummy (Nick), the Phantom of the Opera (AJ), Dr Jekyll and Mr Hyde (Kevin) and are accompanied by zombie backup singers. The video also features a famous supermodel Josie Maran as Howie's companion.

Listen to Everybody (Backstreet's Back)

The following video clip relates to Everybody (Backstreet's Back) by Backstreet Boys:


Lyrics for Everybody (Backstreet's Back):

The following lyrics are the property of the respective authors, artists and labels. The lyrics to Everybody (Backstreet's Back) are provided for educational and research purposes only. Please support Backstreet Boys by purchasing relevant CD's or legal music downloads.

So everybody, everywhere
Don't be afraid, don't have no fear
I'm gonna tell the world, make you understand
As long as there'll be music, we'll be comin' back again

An official website for Backstreet Boys is listed at:

Sorry, we do not currently have any other stored websites for Backstreet Boys. If you are aware of a quality website for this artist, please contact us and we'll add it to this page.

Wikipedia contributors, "Everybody (Backstreet's Back)," Wikipedia, The Free Encyclopedia
https://en.wikipedia.org/wiki/Everybody_(Backstreet's_Back)