Thank you for your interest in Millennium. Below you will find Frequently Asked Questions (FAQ) regarding the possibility of an official return of criminal profiler Frank Black, a feature length Millennium movie, and whether Frank Black would appear in the second X-Files movie.

Please note that we are simply a fan website and not licensed or authorised to make any official statement. The opinions expressed in this article are our own or where relevant and quoted that of other persons or websites. Sometimes these may have been quoted by third parties. We are similarly unable to pass on e-mails and questions to the creative forces behind Millennium or the The X-Files. Thank you for your understanding.

Welcome Frank.
There are 222 days remaining.

The first Bring back Frank Black and make a Millennium movie Petition to Twentieth Century Fox was created by Lance Henriksen Magic, Millennium Desktop UK (now Millennium - This Is Who We Are), The Millennial Abyss and was written by Sue Myatt.

Let us take a look at the current status quo of two issues on the mind of many Millennium fans. As the largest Millennium website currently online, with a large and active Millennium fan community in our forums, we get a lot of e-mails and questions on both subjects, and the short answers to those questions are as follows:

At the beginning of March 2008, Lance Henriksen was alleged to have said it will happen. At the end of that same month, series creator and executive producer Chris Carter said it would be fun to do, but didn't confirm one way or the other on if it would ever be done.

Would Frank Black appear in the second X-Files sequel film, 'I want to Believe'?

In the months leading up to the film's eventual release, it was believed by many that Lance Henriksen might make a cameo appearance, but it was later confirmed by Chris Carter that this would not be the case (see below).


To clarify, our understanding on these important questions is presented below in more depth...

It goes without saying that as site owners here at M-TIWWA, we love Millennium. If a film were to happen, we'd be excited but cautious. We would want to see a comercially viable, intelligently written and of course marketable feature-length film, a film that would add value and bring more substance to the journey and life of Frank Black, his family and the Millennium Group in a creative manner, not detract from it.

Currently though, as of 2018 there are still no 'green-lit' confirmed plans for a feature length Millennium film that we are aware of, or officially told about. Sadly, and this is only our opinion since we're not film experts and we don't claim to speak for fans of the series, it is very unlikely to happen especially given the reasons for the long delay in releasing a second X-Files movie, the much larger original audience of The X-Files compared to the much smaller fan-base for Millennium, and the time factor since the end of the original television series (true when we originally wrote this page 10 years after the series finished, but still relevant now over 21 years later).

The new millennium is sadly a world more dangerous, challenging and forboding era for humanity than ever before. Its not difficult to see the scope for a revival. Several Millennium lead actors and crew members (including the actual series creator) have expressed on multiple occasions their desire to see Frank Black return, pledging their support for a feature-length film release of Millennium. Despite many rumours and incorrect statements, as of September 2018 there are still no confirmed plans for a Millennium feature-length movie by the Twentieth Century Fox Film Corporation that we are aware of, and it is becoming increasingly unlikely for a number of reasons.

Film and television networks, although they endeavour to entertain us, are when all is said and done, exist in business to make a profit. They have shareholders they are responsible to. The long delay in releasing a second X-Files film makes a compelling argument that a Millennium movie is very unlikely, after all The X-Files acheived a much larger existing audience, was definitely a more successful series long term and was an established franchise; therefore for studio investors and executives it is fair to say X-Files was a much less risky business proposal, yet fans still had to wait and to campaign. In fact X-Files fans, many of whom of course are fans of Millennium and vice-versa, have been rewarded with two feature films and a two-series reprisal of the original television series in 2016, which once again prompted speculation and rumours that Millennium may one day return to our screens as opposed to virtual online seasons, comic book format, fan-made video or documentary, all of which have so far all been released.

It should be noted that the sale of Twentieth Century Fox to Disney in 2018 will likely remove any remaining slim opportunity for an official Millennium film, TV movie or a reboot since Disney now own the rights.

Actor Lance Henriksen who portrayed Millennium's criminal profile Frank Black was on several occasions quite vocal on the subject, and was quoted as saying that the film WILL be made (more on this below). Millennium's creator, Chris Carter, has also spoken about the possibility, but played it down in March 2008 and again almost 10 years later in October 2017.

Of course, it's always a possibility that any release could be 'straight to DVD'. The world of television production has also changed in the 21st century with the success and potential funding of streaming services.

Let's have a look back at some of speculation and comments on the subject of a Millennium movie, and also whether Lance would be appearing in the new X-Files sequel... 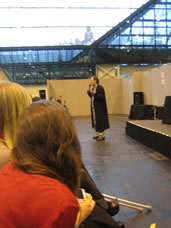 Actor Lance Henriksen sparked much euphoria and speculation with hopeful Millennium fans during a Q&A session at Collectormania in Manchester, England. When asked about the X-Files movie sequel, he stated Chris Carter had asked him not to discuss it with fans if asked whether Frank would be appearing in it... he grinned as he said "can you guess why?". Ain't It Cool News also reported on Lance's comments by way of another person who attended the event.
You can read more about this in our news article at the time.

All those hoping to see the return of Frank Black better go out and buy the Millennium DVD sets. Despite all the speculated rumors that Lance Henriksen was going to be cast in 'The X-Files 2' film as his character from the 'X-Files' spin-off 'Millennium', it turns out that the rumors were NOT true.

According to a very trusted source who has spoken to Mr.Henriksen recently, in his conversation with him Lance revealed that he will not be involved with the new 'X-files' film, and that the rumors have blown way out of proportion.

On 2 March 2008, Lance Henriksen was asked at the Scandinavian Sci-Fi, Game and Film Convention in Sweden about the future of Millennium. He answered that what he had heard from Chris Carter, Carters next project after the untitled X-Files sequel would indeed be the Millennium motion picture. One of our forum members, 'AxelFoley' spoke to Lance in Sweden and posted as follows:

"I just came home from meeting Lance Henriksen on a sacrifice convention held in Sweden. Lance Henriksen is one of (if not the) nicest celebrities i've met in my life. He was so cool & down to earth, just like everyone who's met him has said before. ... he said that the Millennium movie WILL happen, THIS year!

... He said with a clear tone in his voice that the movie will be DARK, very dark. I shot the whole thing with a camera so I'll upload it on youtube for you all to see soon."

Seemingly, the Millennium entry at Wikipedia was updated to this effect, by persons unknown. You can also read our our article at the time.

A week or so later, it was discovered that someone had uploaded a Google video of a recording from Lance Henriksen's recent Q&A Session from the Scandinavian Sci-Fi, Game and Film Convention in Sweden. During the video, Lance mostly answers questions about his role as 'Bishop' from Alien and as usual he's a lot of fun to watch and listen too. However, skip ahead to 15 minutes and 18 seconds into the clip when one female member of the audience gets Lance started on the subject of Millennium, where he also mentions publicly the possibility of a Millennium movie. The Wikipedia Millennium entry was again updated, again not by ourselves.

On the 27th of March 2008, an article was posted at Sci-Fi.com concerning Chris Carter and Frank Spotnitz's appearance at the William S. Paley Television Festival in Hollywood, on March 26. Chris and Frank were there to promote the forthcoming X-Files movie sequel. The writing pair offered fans a few tantalizing spoilers for the movie, including the reason for the delay in naming the sequel's title. Carter also revealed that he has mulled a movie based on Millennium and is reported to have said:

"We've talked about that over the years," he said. "Lance would love to do it. I don't know if it would ever get done. It's a long shot. It would be fun. I have ideas about how to do it."

On the 18th of April 2008, an article was posted at IGN Entertainment, an excerpt relating to Frank Black and Millennium is below:

On April 17, 2008, writer-director Chris Carter and producer Frank Spotnitz appeared at the New York Comic Con to divulge a few details about the upcoming sequel X-Files: I Want to Believe.

Following a screening of the film's theatrical trailer and brief introduction by IGN's Entertainment Editorial Manager Chris Carle, Carter and Spotnitz fielded questions from fans... The pair indicated that Frank Black, the main character of the show Millennium, would not make an appearance in the film. "I wish I could tell you yes but I have to tell you no," said Carter. "That being said I would love to work with Lance and I talk to him about it all of the time."

During September 2008, work commenced on a promotional campaign entitled Back to Frank Black to gather support and increase awareness of the demand for a Millennium movie. Inspired by the comments of Lance Henriksen and Frank Spotnitz, several of our forum members, led by Laredo (Jim) and ethsnafu (Mark) created a website with the assistance and collaboration of other respected fans, with a view to maximizing online interest with downloadable banners and information on who Frank Black was and why he should return.

The BackToFrankBlack campaign originally encompassed a professional, respectful and ethical letter writing campaign, its campaign website and domain was sponsored/hosted by our website and community forums This Is Who We Are (TIWWA). The campaign led to dozens of excellent interviews with ex-cast and crew from the television series, and featured a lot of hard work and creativity, from the organizers and especially the fans themselves.