The Potter's Collection & The Untold

Did you know that Lance Henriksen is an accomplished potter? No, neither did I. He has just launched his website promoting his own range of dishes, plates, cups and saucers known as The Potter's Collection. You'll find his website here: www.bylancehenriksen.com.

For the past 35 years, acclaimed actor, Lance Henriksen, has followed his passion, honing his skills and Mastering the Art of Pottery. Now for the first time, Lance's works are available to the public, each piece hand created by Lance. No two pieces are exactly alike.

Lance has also been putting the finishing touches to his new movie, THE UNTOLD.

Promotional images from The Untold: 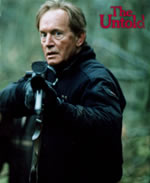 "Harlan Knowles (Lance Henriksen) wants to find his daughter Tara along with the most important scientific find his company has ever produced. Harlan hires an team to accompany him into the mountainous solitude of the Pacific Northwest."
Copyright © 2001 Wilderness Productions Inc. All rights reserved.
Find out more at the official site here: https://www.untoldthemovie.com/

Finally, if you don't live in the UK, the chances are you will have seen Millennium Season Three. The Jury is still out on this season, with a lot of fans disappointed with the way that the story and characters drifted away from their origins. One example is the new agenda of Peter Watts, once a close friend of Frank Black. Also the way that the Millennium Group has been changed to an evil cult-like organization and enemy of the FBI.

One fan. known as Red Kettle, has provided an Alternative Season Three which you will find here. Let him know what you think.