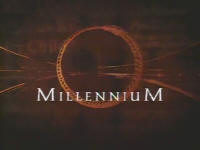 This Is Who We Are member Wellington advises that Millennium fans in Canada can now watch a full re-run of Millennium as from today, Wednesday 6th August on Scream Channel.

Looping around from yesterdays Season 3 finale, Millennium's 'Pilot' commences today at 9am and repeats at 5pm. Whilst this is wonderful news for Canadian's, its no news for Americans who are sadly still unable to see Millennium on any channel. The decision of American Television networks not to show re-runs of Millennium is dreadful.