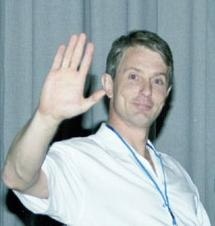 You've no idea how good it was to type that... ahem, Home Theatre Forum have now published the complete transcript of their Online Chat with Fox's Senior Vice President of Marketing Peter Staddon in which he states that Chris Carter's Millennium will be released on DVD this year. You can also find out more about forthcoming DVD Releases for 2004 including Space, Above And Beyond and Harsh Realm.

We have received more than a few e-mails regarding this exciting news mainly asking where the series can be bought, have we got an exact release date yet, what extra features such as commentaries and deleted scenes the DVD release of Millennium: The Complete First Season may contain, even release dates for Seasons Two and Three etc. The short answer is that we simply don't yet have that information but as soon as anything is known we will publish it. We will also publish a list of the best suppliers when the Box Set is released. Meanwhile we will be providing a new section soon where you can pre-order Millennium through ourselves.

We have also received thanks for our continued support of Millennium from many fans and would like to thank them all for that. Don't forget you can discuss what features you would like to see on the Millennium DVD and indeed news of its release within our Message Board Forums.

2004 and 2005 will be the biggest years yet for Millennium due to the release of this fine TV series. The release will have a profound effect on Millennium's online presence not only by providing more content and material for online sites but also because it will introduce a new wave of interested fans eager to participate and learn more about the series.

The Time Is Near.