Our thanks to This Is Who We Are Member "Second Coming" on his discovery that Fox intend to release Seasons 2 and 3 onto DVD. This has been of huge concern to Millennium fans who are eagerly awaiting confirmation of the second and third Season Box Set releases which it has been said will be dependant on sales of Season One.

DVD and Movie review site Zeta Minor have had a sneak preview of the region 2 (UK and Western Europe) release of Harsh Realm, a short lived series by Millennium and X-Files creator Chris Carter which has attained a cult following. The box set of Harsh Realm contains advertisements for future Fox DVD products and in particular carries the following artwork... 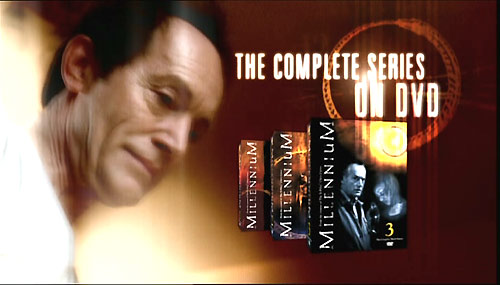 Zeta Minor states, "Fox seem bullish about Millennium's prospects on DVD. There's an advert, above, on the Harsh Realm disc that promises that all three seasons will be released (you can see a larger version here). Although there's a hardcore audience that will certainly buy all three seasons if they're released, each season was quite different, and has its own subset of fans."

This is excellent news for all Millennium fans. The image for Season Three has been the subject of discussion at This Is Who We Are with Brian Dixon (Moderator and respected owner of The Millennial Abyss) confirming that the artwork is from the Japanese VHS video releases.