The first five online shopping web stores that are listing the second season of Millennium for pre-order have been discovered after an exhaustive search. All five sites are quoting the previously discovered release date of 27th September 2004. As always we'll maintain a complete and up to date list of stores at This Is Who We Are. Also added is the specification list for Season Two which includes any and all discovered information. You can find all information relating to Millennium on DVD at TIWWA's DVD Section. Make it your one stop shop!

Amazon who were extremely slow to add a listing for Millennium: The Complete First Season have yet to provide a listing for Season Two however we'll add this and any other newly discovered sites as soon as they become available. I'd like to thank everyone who has submitted pre-order links for Millennium on DVD to us both here and at TIWWA, this list has proved very popular amongst fans and authors of Millennium fan sites. Again anyone wishing to share a discovered link to an online pre-order facility should contact us and they will be given full credit.

Meanwhile, here's a first glimpse of the Season Two cover art supplied by TIWWA's The Frenchman which accompanies the French pre-order facility at Alapage.com: 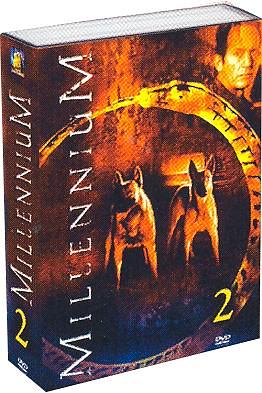