There seems to be a lot of talk around the internet of a Millennium music CD. I did find the following image some time ago on a Japanese Millennium site but was unable to find out more about it. 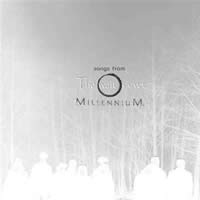 If anyone can tell me more about this I'd be grateful.

I recently found (since disappeared into the ether) another CD entitled The Millennium Theme - Mark Snow Millennium Original Soundtrack put up on the internet by someone named Çizek Martin. I tried to contact him about this but sadly have never received a reply. Perhaps he doesn't understand English.

I would like to know more about this compilation.

The following refers to the Millennium: Season One Promo CD.

Over at The Millennial Abyss Multitude Of Voices, forum member Caligari has posted the following:

I assume that they will release season 1 shortly - concerning the rumours - since I own a promotional CD release with the tracks of the 1. season. They wouldn't have released it if there weren't any plans to release a DVD.

My best friend and me met this July and he's working for a record label in LA which works for Universal etc. He's a designer too and did the artwork for Mark Snow soundtracks. He only had one promotional copy but let me burn it. It was fully designed and all. Why should they release a promo CD if they don't plan to finally release the first season on DVD? I read about the rumours and also found a link to a page that shows future release dates for DVDs. It's a soundtrack CD with a song for each episode and starting and ending with the Millennium theme. I only had the CD borrowed for a few hours, so I don't remember much more than the titles. Design was typical though - brownish fading.

I recall reading once that Mark Snow, creator of Millennium's theme music and in-episode incidental music wanted Fox to allow him to release a Music CD of his Millennium Music. It would certainly be a best seller. Hopefully before too long the questions over the release of a DVD box-set of Millennium will be answered. So too, the Millennium Music CD.

UPDATED: The best of Millennium Soundtrack by Mark Snow was released some years later and at the time of writing is available on the US version of iTunes. Search our news for more details.