These include billboard, promotional posters and bus shelter adverts which appeared all over the US during the run up to Millennium's pilot episode, creating a desire to know more about what the next series from Chris Carter may hold.

In contrast, the time and money spent promoting Millennium by the Fox Network whilst the show was on-air, particularly in comparison to its other hit shows such as The X-Files was very little, leading to a decline in ratings that eventually brought the series to its early conclusion. It is said that Fox refused to grant Millennium the primetime advertising time it required and this was a constant source of frustration for the production staff, who worked hard to get the series the promotional attention it deserved, striving to keep the series on the air. Executive Producer Glen Morgan commented during the second season that much of the on-air advertising time that should have been used to promote Millennium had, instead, been focused on channels such as Fox Sports.

The following pages from this Millennium Episode and Credits Guide may also be of interest: 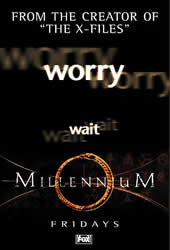 Credit: These images remain the acknowledged Copyright of Twentieth Century Fox and are used for educational purposes.