Paul Mauriat - A Room With No View - Millennium Music Profile

This page is an introduction to Paul Mauriat whose music was used during the Millennium episode A Room With No View. A complete list of all music by Paul Mauriat that was used throughout Millennium is also listed below.

This music profile has been viewed 55382 times.

A Room With No View

When one gifted high school student dies of fear and his underachieving best friend disappears from the scene, Frank Black investigates and gets the intense feeling that his old nemesis, Lucy Butler, is behind the crimes. The investigation uncovers Lucy's new home, a prison of sorts where she uses conflicting stimuli of harsh violence and pure love to break down the wills of abducted youngsters.

Still images from A Room With No View

There are a total of 140 images for A Room With No View which are available in our Episode Image Gallery. Love is Blue is for the show's fans, the most famous of all songs to be used throughout Millennium's three season's. Quite simply it was pure brilliance on the part of the show's writers to feature this song, tormenting Lucy's prisoner's until they were effectively brainwashed.

Lucy Butler discusses her choice and love of this music with captive Landon Bryce:

[Throughout the scene, once again 'Love is Blue' plays continuously.]

[Lucy is sitting on the floor of the cell, stroking Landon's face, his head in her lap.]

LUCY: Love is blue. Not white or red or yellow. Love is not green. It's blue. That is the brilliance of this music. When I touch you, what color do you feel?

[She moves her hand down his chest.]

[Ben is huddled under his blanket, gripping the mattress.]

LUCY: It makes me so mad when people call this elevator music. See, Mozart, Beethoven, Haydn, they could never compose this music. There, with me, you've already come to know what only the truly gifted can understand. You felt it. Blue.

The Millennium episode A Room With No View contains the following music by Paul Mauriat:

Music from Paul Mauriat was used in a total of 1 episode/s of Millennium. Below is a complete list of all music by Paul Mauriat heard throughout the series and the episodes in which it was used, including links to the relevant music and episode profiles:

Paul Mauriat (Marseille, 4 March 1925 - 3 November 2006 in Perpignan) was a French orchestra leader, specializing in light music. He is best known in the United States for his hit (#1 for 5 weeks in 1968) recording of Andreacute; Popp's "L'Amour est bleu" ("Love is Blue"), originally recorded by Vicky Leandros.

Mauriat grew up in Marseilles and began leading his own band during the Second World War. In the 1950s he became musical director to at least two well-known French singers, Charles Aznavour and Maurice Chevalier, touring with them respectively.

In 1957, Mauriat released his first EP Paul Mauriat, a four track RGM release. Between 1959-1964 Mauriat recorded several albums on the Bel-Air record label under the name Paul Mauriat et Son Orchestre, as well as using the various pseudonyms of Richard Audrey, Nico Papadopoulos, Eduardo Ruo and Willy Twist, to better reflect the international flavour of his recordings. During this period, Mauriat also released several recordings with Les Satellites, where he creatively arranged vocal backing harmony for such albums as Slow Rock and Twist, (1961), A Malypense (1962) and Les Satellites Chantent Noel (1964).

He wrote his first song with Andreacute; Pascal. In 1958 they were prizewinners in the Coq d'or De La Chanson Francaise with Rendez-vous au Lavendou. Using the pseudonym of Del Roma, Mauriat was to have his first international hit with Chariot, which he wrote in collaboration with friends Franck Pourcel (co-composer), Jacques Plante (French lyrics) and Raymond Lefevre (orchestrator). In the USA the song was recorded as I Will Follow Him by Little Peggy March and became #1 on the Billboard charts in all categories for 3 weeks. In 1992 the song was featured prominently in the film Sister Act starring Whoopi Goldberg. More recently, Eminem included some bars in his song, Guilty Conscience.

In 1965 Mauriat established Le Grand Orchestre de Paul Mauriat, and released hundreds of recordings and compilations through the Philips label for the next 28 years. In 1994 he signed with Japanese record company Pony Canyon, where he re-recorded some of his greatest hits and wrote new compositions. Mauriat recorded many of these albums in both Paris and London, utilising several English classical musicians in these recordings.

For several decades, one of Mauriat's compositions served as a musical track for the weather report in the USSR's premier TV news program. His other compositions were used in "In the world of animals" (V mire zhivotnykh) and "Kinopanorama" programs.

Many of Mauriat's recordings are recompositions of other composers' songs and music. Mauriat relied heavily on strings and synthesiser to create interesting music. The arrangements are usually very bright and busy with sensible use of the percussive section to deliver a grand style of performance. In his 70s and 80s live concerts, Mauriat often used singers to provide backing for numbers such as Penelope, Love is Blue and the World Melody section he arranged for his 1980 and 1982 concerts.

Mauriat gave his final performance in 1998 in Osaka, but his orchestra keeps touring around the world and has twice traveled to China. Among his best known recordings are L'amour est bleu, El Bimbo, Toccata and Penelope.

Mauriat's former lead pianist, Gilles Gambus, became the orchestra's conductor in 1999 and led successful tours of Japan, China, and Russia. Gambus had worked with Mauriat for more than 25 years.

In 2005, classical French Horn instrumentalist, Jean-Jacques Justafre assumed conductorship of the orchestra, and led successful tours of Japan and Korea in late 2005. 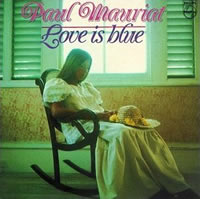 Scene:
Love is Blue (Instrumental version) can be heard during the following scenes in the Millennium episode A Room With No View:

Heard throughout the episode as Lucy Butler played the song to her captives, repeatedly, endlessly.

"L'Amour Est Bleu" (English translation: "Love Is Blue") is a song written by Andreacute; Popp (music) and Pierre Cour (lyrics) in 1967. First performed in French by Vicky Leandros (appearing as Vicky) as the Luxembourgish entry in the Eurovision Song Contest 1967, it has since been recorded by Paul Mauriat, Jeff Beck, Claudine Longet, The Dells, Ed Ames, Johnny Mathis, Al Martino, and Chara.

The song describes the pleasure and pain of love in terms of colours (blue and grey) and elements (water and wind).

In late 1967 an orchestral "easy listening" version was recorded by Paul Mauriat and was a number-one hit in the USA for five weeks in February and March 1968. It was the only number-one hit by a French artist to ever top the Billboard Hot 100. Jeff Beck recorded a "rock" interpretation of this version in 1968.

In 1969 The Dells had a top-thirty hit with their soul version, "I Can Sing A Rainbow/Love Is Blue". Frank Sinatra also recorded this lyricised version of this tune. Lawrence Welk was one of many artists who covered the song in the late 1960s.

L'Amour est bleu was entered by Luxembourg in the 1967 Eurovision Song Contest. It came fourth with 17 points. The song has since become a favourite of Contest fans, most notably appearing as part of a medley introducing the semi-final of the Eurovision Song Contest 2006 in Athens, one of only two non-winning songs to be involved.

Now-a-days the song "L'Amour est bleu" is noted as one of the most covered and biggest selling Eurovision Songs ever. It has become familiar to millions of Soviet TV viewers as a tune that accompanied weather forecasts in the daily news program Vremya. In 2006 an instrumental of the song's chorus was used in a television advert for Lynx Dry anti-perspirant in the UK and Australia.

Sorry, we do not currently have any other stored websites for Paul Mauriat. If you are aware of a quality website for this artist, please contact us and we'll add it to this page.