A profile of Millennium episode Monster, synopsis, images, credits, related trivia and facts plus the original promotional trailer where available. The episodes follow the original US TV Air Date/DVD box set order which is most familiar to the majority of fans.

In France, this episode was entitled Le Monstre which translates into English as The Monster. [View all]

In Finland, this episode was entitled Paholaisen pauloissa which translates into English as In the devil's toils. [View all]

In Germany, this episode was entitled Monster which translates into English as Monster. [View all]

There are a total of 115 images for Monster which are available in our Episode Image Gallery. 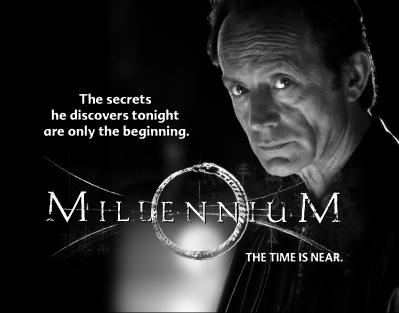 What is the truth behind a series of child abuse cases stemming from a day care center in Arkansas? Two of the Millennium Group's most promising visionaries are sent to find out yet aren't told a thing about their counterpart or their case. Frank and his new partner soon find that they may have more in common than they thought, and that demons can come in the most unexpected of forms. Unfortunately, the Group's little test takes a dangerous turn as the town's people go on a witch hunt for the child abuser and arrests Frank Black as their monster.

The secrets he discovers tonight are only the beginning. The time is near.

Please note that this is the original Fox synopsis and occasionally this may differ from the events that were actually filmed. Please also view the Monster episode transcript which has been painstakingly checked for accuracy against the actual episode.

Watts arranges for Frank to meet with District Attorney Gordon Roberts, who is investigating Miss Penny Plott--the longtime owner of a daycare center in Probity, Arkansas--on charges of child abuse. Before Frank embarks on his journey, he goes shopping with Jordan at a department store. As children often do, Jordan grows fidgety and demands attention. Frank loses his cool and chastises his daughter for her behavior.

Police deputy Bill Sherman, who sends his son Bill Jr. to Plott's daycare center, discovers a bite mark on his son's back. When Bill Jr. speaks of retribution should he reveal the source of the injury, it only adds credence to rumors surrounding Plott.

Pretending to be a parent, Frank pays a visit to the daycare center. His investigation is cut short when he is interrupted by Lara Means, who was hired to represent Plott's interests. The pair put aside their differences when one of the children, Jason Wells, stops breathing. Despite Frank and Lara's best efforts, the boy succumbs. Meanwhile, Catherine takes Jordan to see a dentist after her daughter spits out blood while brushing her teeth. The dentist suggests Jordan may have received a cut lip from being aggressively disciplined. Catherine dismisses the notion that Frank may be responsible, but later, Jordan reveals that Frank lost his temper at the department store.

A coroner attributes Jason's death to an acute asthma attack. Despite a lack of evidence, District Attorney Roberts remains convinced that Plott must somehow be at fault. The investigation seemingly hits a dead end until Frank, Lara and Roberts interview Danielle Barbakow, one of the children under Plott's supervision. Danielle describes overhearing an incident in which Plott physically abused Jason. Shortly thereafter, Plott is placed under arrest. Inside an interrogation room, an outraged Plott reminds Bill Sherman that he was under her supervision as a child--and that in thirty-six years of running the center she has never been accused of any wrongdoing. When Plott wins release on bail, a guilt-ridden Bill Sherman announces that, even though his own son has a mark on his body, he refuses to believe Plott is capable of child abuse.

Frank and Lara both conclude that Danielle is responsible for Jason's death. They also realize they were both sent by the Millennium Group to investigate the case... possibly as some sort of test. The pair travel to the Barbakow residence, where they meet Danielle's mother, Virginia. As Lara and Virginia talk, Frank interviews Danielle inside her bedroom. Suddenly, Danielle begins screaming--and accuses Frank of touching her. Virginia comforts her daughter, who suffers from a split lip. A short time later, Frank is arrested for assaulting a minor.

Roberts also reveals that Frank is under investigation for possibly assaulting his own daughter. Frank demands that Roberts examine an alternate light imaging photograph of Danielle's injuries, confident it will prove his innocence. Lara returns to the Barbakow residence and compares the special photograph with the wings of an angel on Danielle's dresser. Lara realizes the patterns are identical, and later, Virginia Barbakow admits she heard her daughter inflict the injuries upon herself. Catherine and Jordan meet Frank at the police station upon his release. Catherine apologizes for the investigation into Jordan's injuries.

The fourth episode [of season 2], "Monster," about accusations of abuse at a day care center and the evil within one particular child, introduced a new recurring character, psychologist Lara Means, played by Morgan's wife Kristin Cloke (previously seen in Morgan and Wong's SPACE: ABOVE AND BEYOND). Lara, like Frank, is a candidate for the Millennium Group and, also like Frank, experiences visions. Unlike Frank, however, her visions, often of an angel, fill her with fear, and by season's end she suffers a complete mental collapse.

Morgan and Wong created Lara as a character who would both challenge and reflect Frank. "My biggest worry was that people would think we were trying to make them like Mulder and Scully," Morgan said. "We wanted somebody with an incredible gift to counter Frank. Right from the beginning, the idea was to have Lara see these visions and know what the Millennium Group was saying was true. Knowing that would drive her crazy because if the world is ending, what's the point of going on? Coupled with that, we had the Millennium Group saying, `We not only have the responsibility of knowing; we have the responsibility of doing something about it.' The knowledge overloads her, and she goes insane. By seeing that, Frank Black will have a person to compare and contrast himself to: `This is my potential fate.' And that took him back to the yellow house. Lara is a possibility of what Frank could be. If you're going through the forest, you could be eaten by a troll, or you could get out. Lara did not get out of her dark forest. When the Millennium Group says to Frank, `Do you want to become an initiated member? You're ready to move up a rank,' he can look at Lara and say, `I don't know.' And yet, he believes in what she sees and that what the Group is after is right. It's such an extraordinary responsibility."

At the beginning, the scene outside the daycare center. Two rabbits in a cage have their names pinned to the cage: Bill and Hillory (sic). The Clintons? The episode took place in Probity, Arkansas.

Credit: The Fourth Horseman of TIWWA