Somehow, Satan Got Behind Me - Millennium Episode Profile

A profile of Millennium episode Somehow, Satan Got Behind Me, synopsis, images, credits, related trivia and facts plus the original promotional trailer where available. The episodes follow the original US TV Air Date/DVD box set order which is most familiar to the majority of fans.

Somehow, Satan Got Behind Me

In France, this episode was entitled Analyse Diabolique which translates into English as Diabolic Analysis. [View all]

In Finland, this episode was entitled Ihmiskunta tuhon tiellä which translates into English as Mankind on the way to destruction. [View all]

In Germany, this episode was entitled Arme Teufel which translates into English as Poor Devils. [View all]

Random scenes from Somehow, Satan Got Behind Me

There are a total of 170 images for Somehow, Satan Got Behind Me which are available in our Episode Image Gallery. 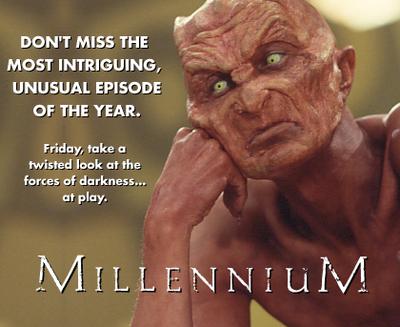 #MLM-221 Somehow, Satan Got Behind Me

Four vile demons, servants of evil who pose as elderly men, gather for their nightly meeting in a downtown donut shop and discuss over coffee and crullers their own personal methods of leading humanity down the path to hell. During the discussion they come to the realization that they've all encountered a gifted man who may have seen them for the demons they truly are: Frank Black.

Don't miss the most intriguing unusual episode of the year. Friday, take a twisted look at the forces of darkness... at play.

Please note that this is the original Fox synopsis and occasionally this may differ from the events that were actually filmed. Please also view the Somehow, Satan Got Behind Me episode transcript which has been painstakingly checked for accuracy against the actual episode.

After delivering newspapers to homes in the wee hours of the morning, a man named Abum makes his way to a donut shop. There, the grumpy old-timer angers a clerk with his irascible attitude. The clerk responds by urinating in Abum's cup of coffee. Abum makes his way to a table, where he joins three other men: Blurk, Greb and Toby. As the foursome assume the shape of monstrous devils, Abum announces that the clerk urinated in his coffee. The devils share a private chuckle... that bubbles over into demonic cackling.

Blurk laments how the current century lacks characters and personalities. He illustrates his point by recounting a story in which he met up with a young man, Perry, who had potential serial killer written all over him. Posing as a hitchhiker in human form, Blurk befriended Perry, and the pair struck up a conversation about serial killers. Perry pointed out a little devil statuette on the dashboard of his van, noting that Johnnie Mack Potter, the most prolific murderer in America, made it in prison. Blurk revealed that he, too, collected murder memorabilia, and told Perry that he possessed all the makings of a prototypical serial killer. He encourages Perry's talent, telling him to play the hand he had been dealt. Soon after, Perry began killing prostitutes, and eventually announced his intention to beat Potter's record. Eventually, Perry came one murder shy of making the record books. However, it was at that point that Frank Black began closing in on the killer. During the investigation, Black saw Blurk for the devil he is...something that perplexes Blurk to the current day. Bored with the killings, Blurk gave authorities a clue that led to Perry's arrest. Ironically, Perry ended up sharing a cell with his idol, Johnnie Mack Potter... who proceeded to strangle Perry, and remains the undisputed king of the serial killers.

Abum then proceeds to tell a story of his own, insisting devil work is no longer necessary, as mankind has found a way of doing it all for him. He recounts the monotonous existence of an Everyman named Brock, who repeated the same boring daily routine day after day. Brock frequented a strip club, which caused Abum to conclude that men sinned so often that whatever passion first compelled them to commit such acts had long passed. Eventually, Abum took it upon himself to tweak Brock's life with a minor irritant (in this case, by assuming the form of a meter maid). During this particular incident, Frank spotted Abum's true devil form while parking his car... prompting great interest from the devils listening to the story. Eventually, Brock threw himself out a window.

Greb proceeds to recount a story of his own, one involving a television network censor named Waylon Figgleif. Waylon believed the weight of maintaining a nation's morality rested on his shoulders, and because of this, Greb believed that making Waylon's mind snap was an especially easy task. Greb assumed the form of the Internet/Ally McBeal baby and ran inside Waylon's office. Waylon concluded the baby was evidence of his own psychological breakdown, and attempted to censor things he encountered in his everyday life. The devil baby made yet another appearance before Waylon, this time encouraging him to kill. Waylon responded by bursting onto a Hollywood soundstage where two FBI agents were autopsying an alien body. As a cameraman recorded the action, Waylon opened fire, killing several of the actors portraying aliens. At this point, Greb snaps his fingers... realizing he, too, spotted Frank as he investigated the incident. Greg concludes that by damning Waylon's soul, he damned millions of others... as the footage captured by the cameraman was broadcast by another network in a show entitled: "When Humans Attack!"

The other devils react with alarm when Toby declares that the mystery man (Frank) knows who they are. Toby then recounts his story. It begins at a strip club, where a naive-looking first-timer turned and looked at Toby in sheer horror. Toby realized the boy didn't see his devil form; rather, he saw his own self, his potential future. Reacting to a particularly vulnerable moment, Toby paid a stripper named Sally to gyrate on his lap. The pair discovered they were like two lost souls, and a relationship developed. One night, Sally saw Toby's true essence, his devil self, as he laid in bed. Sally nonetheless forgave Toby for his faults. Toby took Sally to the donut shop, where he began to ask for her hand in marriage. But at the last second, he changed his mind and ended the relationship. Toby then made his way to Sally's apartment, where police discovered her body, the victim of a suicide. It was at the apartment that Frank saw Toby in his devil form. But instead of reacting shocked, Frank simply said, "You must be so lonely." It suddenly dawns on the other devils sitting in the donut shop that the description is correct, as they are all the loneliest creatures on earth. As the foursome leave the shop, Abum praises the clerk's coffee.

Many of the myriad jokes crammed into this episode were written as humorous jabs at the Fox network. The segment featuring Waylon Figgleif, a censor for the fictional Ant Network, was written by Darin Morgan based on his observations of the Millennium staff's regular confrontations with the Fox network's own Broadcast Standards and Practices division.

The dancing, computer-generated demon baby that Waylon Figgleif sees as a hallucination spoofs the dancing baby seen on Fox's Ally McBeal. The demon baby seen here was created by Scott Wheeler and the creative team at Area 51, the effects house responsible for all of Millennium's special effect needs.

(Comprised of 4 murders + 0 kills in self defence + 0 justifiable homicides + 3 suicides.)