A profile of Millennium episode Pilot, synopsis, images, credits, related trivia and facts plus the original promotional trailer where available. The episodes follow the original US TV Air Date/DVD box set order which is most familiar to the majority of fans.

Welcome Frank.
There are 35 days remaining.

There are currently 7 related articles available for this episode. You can access a list of all Millennium Episode Articles here.

In France, this episode was entitled La Seconde Venue which translates into English as The Second Coming. [View all]

In Finland, this episode was entitled Maailmanlopun profetia which translates into English as An apocalyptic prophecy. [View all]

In Germany, this episode was entitled Der Jüngste Tag which translates into English as The Day Of Judgment. [View all] 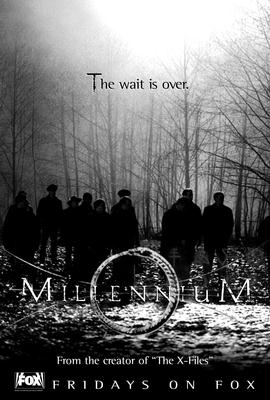 The wait is over.

Thy mother [is] like a vine in thy blood, planted by the waters: she was fruitful and full of branches by reason of many waters.

And death and hell were cast into the lake of fire. This is the second death.

But the fearful, and unbelieving, and the abominable, and murderers, and whoremongers, and sorcerers, and idolaters, and all liars, shall have their part in the lake which burneth with fire and brimstone: which is the second death.

Please note that this is the original Fox synopsis and occasionally this may differ from the events that were actually filmed. Please also view the Pilot episode transcript which has been painstakingly checked for accuracy against the actual episode.

A seedy peep show in downtown Seattle. As seedy men pay for brief glimpses of female flesh, one customer has more than sex on his mind. Mumbling obscure and ominous phrases, he hallucinates sheets of blood pouring over the body of a blond dancer. Later that night, she is savagely murdered.

Just arrived in Seattle, Frank and Catherine Black, and their five-year-old daughter Jordan, are happily settling into their new suburban home. But the evil of the outside world soon disturbs Frank's contentment. Spotting a newspaper account of the dancer's brutal death, Frank contacts his former boss, homicide cop Lieutenant Bob Bletcher. Frank volunteers his expertise as a retired FBI agent specializing in serial killers.

When he views the body, Frank catches vivid and bloody glimpses of the crime, and knows the Killer will strike again. His intimate knowledge of the details spooks his old friend. Now a consultant for a consortium of ex-law enforcement officers called the Millennium Group, Frank offers their resources to help the department find the killer. Peter Watts, a member of the group, agrees with Frank's assessment. Driven by an external stressor, the killer is out of control...and out for more blood.

Stalking the gay cruising scene for his next victim, the killer is lost in a warped world of hallucinations, surrounded by passers-by with eyes and mouths gruesomely sewn shut. Later that night, the cops find his latest victim's charred, headless body, and nearby, an empty coffin. Again, Frank's detailed knowledge of the crime startles Bletch. Frank's investigations and visions even lead him straight to the killer, who manages to lose Frank after a close chase.

Frank presents his findings to the homicide department. Obsessed by apocalyptic prophecies, and maddened by twisted sexual guilt, the killer believes he is cleansing sin from plague-infested Seattle. Not unexpectedly, the cops reject what they don't understand...except for Bletch. He demands an explanation from Frank. And Frank, at last, reveals his secrets.

His gift is also his curse. He sees what the killer sees, becoming what we most fear to hunt, what we must destroy. In the past an anonymous person sent Polaroid photos of his family to him, distorting Frank's knowledge of evil into paralyzing fear. He quit the FBI, refusing to let his family out of his sight. Then he was contacted by the Millennium Group, an association formed to battle the darkness that approaches with the coming millennium. They offered to help him use his gift, and Frank moved his family back to Seattle.

Frank must rush to the hospital when his daughter is stricken with a high fever. Despite his love for Jordan, he can't leave his job behind. Alerted by sudden insight, Frank leads the cops to their most horrifying discovery: a man buried alive, his eyes and mouth sewn shut, his fingertips roughly amputated.

Finally, Frank tracks the killer to the police department's own evidence lab. In a psychotic rage, the Killer savagely attacks Frank, raving about the apocalypse. Just in time, Bletcher's bullet saves Frank from the killer's deadly assault.

The killer's death releases Frank to seek peace in the love of his family. But his serenity is shattered by a nightmare sent in the mail: anonymous Polaroids of his family.

Frank Black: The killer is confused about his sexuality. He feels guilt, quite possibly from his mother. So he goes to peep shows to try to feel something toward women but all he feels is anger – anger that fuels his psychosis, that distorts and twists his view of reality. [...] His way of dealing with [his confusion] is by fulfilling a prophecy.

The peep-show club, which we called the Ruby Tip, was inspired by a Seattle institution which is called the Lusty Lady which is on Main Street in Seattle, which is where the pilot is set and the show is set.

You can read more about the Lusty Lady here.

A shot of the Frenchman picking up a gay man before driving away was filmed under the Lion's Gate Bridge in Vancouver. The same bridge was also used as the bridge, in the same episode, where the Frenchman drags the lifeless body of the gay man out of a car and into its trunk (boot); in this later scene, both the road running along the top of the Lion's Gate Bridge as well as the bridge's underside can be seen.

The memorable scene on the bridge where Frank Black chased the killer was filmed on Burrard Street Bridge in Vancouver, Canada.

(Comprised of 2 murders + 0 kills in self defence + 1 justifiable homicides + 0 suicides.)