A profile of Millennium episode 19:19, synopsis, images, credits, related trivia and facts plus the original promotional trailer where available. The episodes follow the original US TV Air Date/DVD box set order which is most familiar to the majority of fans.

In Finland, this episode was entitled Myrskyn enteitä which translates into English as Signs of storm. [View all]

In Germany, this episode was entitled Die Kinder von Broken Bow which translates into English as The Children Of Broken Bow. [View all] 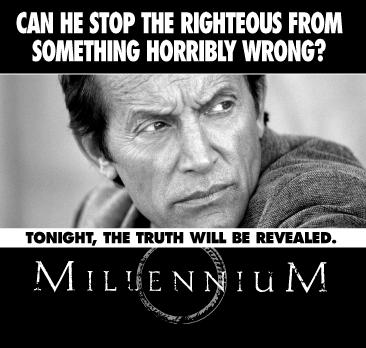 Can he stop the righteous from doing something horribly wrong? Tonight, the truth will be revealed.

And I saw the beast, and the kings of the earth, and their armies, gathered together to make war against him that sat on the horse, and against his army.

Please note that this is the original Fox synopsis and occasionally this may differ from the events that were actually filmed. Please also view the 19:19 episode transcript which has been painstakingly checked for accuracy against the actual episode.

A Man living in a trailer park switches on a radio and several different television sets and listens to several news broadcasts simultaneously. The Man moves to a spot on his white linoleum floor and, using a marker, begins making brief notations about the news stories. Every inch of the floor is covered with his writing, all pointing to the last empty spot. It is here that the Man writes the word, "me." The Man steps outside his trailer and, bible in hand, experiences an apocalyptic vision: nuclear devastation and a field of ash.

Frank and Peter Watts join the search for a busload of missing children. Records indicate the vehicle's missing driver, Vernon Roberts, is more likely a victim than a suspect. The pair receive word that the bus has been located beneath a river. They join Sheriff Cayce-whose daughter, Jessica, is amongst the missing group-as the vehicle is towed from the water. Though the bus is empty, Frank receives a "hit" when he touches Jessica's backpack, seeing the same apocalyptic vision experienced by the Man at the trailer park.

Frank observes a white paint mark on the bus's emergency door. He tells Cayce that the perpetrator, and an accomplice, are using a white van to transport their hostages. A chase ensues when police spot a speeding white van on the highway. But the occupants turn out to be a group of meteorologists-storm chasers-hoping to link up with a violent weather system. The meteorologists warn Frank and the others that the storm front is capable of spawning a destructive tornado.

The Man and his Accomplice force Vernon and the children into an underground trailer buried in a field. The Accomplice performs a head count and realizes there were seventeen children and one adult abducted -- one shy of the number nineteen. The Man forces Vernon to identify the one missing child. Meanwhile, a clue-in the form of a passage from Revelation 19, Verse 19-airs on a local radio station. Frank realizes the perpetrator meant to abduct nineteen hostages. He and Cayce race to the home of the missing student. There they encounter the Man, who had broken into the house in an attempt to abduct the child. A struggle ensues, and the Man is taken into custody.

Frank tells Watts that the Man is not a criminal. To the Man, his mission is "a fight between good and evil." Watts tells Frank that the Millennium Group possesses a database of names of anyone who purchased a Bible by mail in the last ten years-a list which can be narrowed down to specialty items. Using the list, the pair locate the Man's trailer... and the markings on the linoleum floor. Later, the Man, now identified as Matthew Prine, states that World War III is inevitable... and that he is protecting the future. Frank realizes Prine kidnapped all the children because one of them is a peacemaker.

Lara Means notices that Prine scratches his hand whenever he experiences guilt. By analyzing a soil sample taken from Prine's clothing, it is determined that the children are entombed in an aluminum quarry. A deputy drives Prine to the quarry, and as the others watch via hidden camera, Prine inadvertently reveals the location of the tomb by scratching his hand. The Accomplice spots the police vehicle and opens fire. Frank and Cayce race to the scene, and as the Accomplice continues firing, a powerful storm suddenly erupts. A tornado descends from the sky, enveloping Prine-and lifting a huge cargo container off the tomb. After the winds subside, the children poke their heads out of the hole, one by one. Cayce rushes to his daughter and embraces her. Frank realizes that Jessica may be a future savior.

Character: Jessica Cayce. Edgar Cayce: the well known seer, known otherwise as the famous "Sleeping Prophet", a modern day visionary. He was also credited with being a source of great and miraculous healing for untold numbers of people around the world.

Credit: The Fourth Horseman of TIWWA

From: https://www.crystalinks.com/edgar_cayce.html. He prophesized the Sphinx had been built in 10,500 BC and that survivors of Atlantis had concealed beneath it a "Hall of Records" containing all the wisdom of their lost civilization and the true history of the human race. Cayce prophesied that this Hall of Records would be rediscovered and opened between 1996 and 1998. He connected the opening to the second coming of Christ. The children were concealed below ground as was the "Hall of Records" and this episode aired in 1997.

(Comprised of 0 murders + 0 kills in self defence + 0 justifiable homicides + 0 suicides.)