The Beginning and the End - Millennium Episode Profile

A profile of Millennium episode The Beginning and the End, synopsis, images, credits, related trivia and facts plus the original promotional trailer where available. The episodes follow the original US TV Air Date/DVD box set order which is most familiar to the majority of fans.

There are currently 3 related articles available for this episode. You can access a list of all Millennium Episode Articles here.

In France, this episode was entitled Le Début et la Fin which translates into English as The Beginning and the End. [View all]

In Finland, this episode was entitled Yhdessä - ja yksin, osa 2/2 which translates into English as Together - and alone, part 2/2. [View all]

In Germany, this episode was entitled Der Komet des Bösen which translates into English as The Comet Of Evil. [View all]

Random scenes from The Beginning and the End 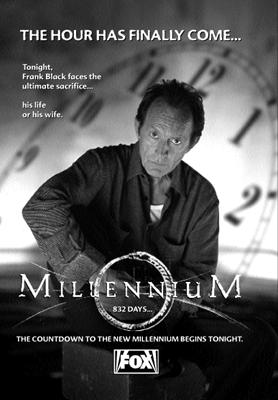 #MLM-201 The Beginning and the End

The hour has finally come... Tonight Frank Black faces the ultimate sacrifice... his life or his wife.

Please note that this is the original Fox synopsis and occasionally this may differ from the events that were actually filmed. Please also view the The Beginning and the End episode transcript which has been painstakingly checked for accuracy against the actual episode.

The episode opens with images from outer space, the life of a comet. The same comet appears in the night sky Frank Black is staring into, causing him to contemplate his own destiny and the relevance of the celestial body. In his monologue Frank is considering the "life" of a comet and its analogous relationship to our own existence. Referring to his immediate state, Frank asks, "is this the beginning or the end?"

As seen in the previous season's cliffhanger... At the Seattle airport, Frank carries a sleeping Jordan out to the car as Catherine waits near the baggage carousel to retrieve their luggage. The Polaroid Man approaches Catherine, pretending to be seeking money. Using a hypodermic needle, he drugs her and escorts/drags her to the airport parking lot and then secures her inside a hidden compartment beneath his automobile. As a frantic Frank alerts security about his wife's disappearance, the Polaroid Man gets away. He makes his way to a high bluff, where he gazes upon the same two-tailed comet seen in the Teaser. A sheriff on routine patrol questions the stranger about his activities. The Polaroid man explains that the comet is an omen pertaining to the Millennial outcome.

Meanwhile, key Millennium Group members arrive at the airport even though they had not been contacted by Frank. After an unsuccessful visit to a roadblock in search of Catherine's kidnapper, Frank returns home to Jordan. As he sits by her bedside Jordan assures her father that Angels are in her room.

In an intimate conversation, Frank tells Watts of his sense of powerlessness. He wonders out loud what he must sacrifice to have Catherine back safely. Watts relates a story about a time when he and his wife were attempting to have another child (Watts had always wanted a boy). One day, Watts was assigned a case involving a murdered baby boy whose dismembered body was found inside a cooler. Watts came to believe that if he could find the child's killer, he would be rewarded with a son. Wanting to uphold his end of his pact with God, he would not allow his wife to get pregnant. Today, he has three daughters but still no son. He tells Frank that he doubts it is possible to sacrifice one thing to get another. Meanwhile, the Polaroid Man ties Catherine to a support beam inside his dark cellar.

Watts instructs two Millennium Group members, Brian Roedecker and Dicky Bird Perkins, to install a special security system on Frank's computer. Watts explains that Frank is now ready to receive more sensitive information. This comes as a surprise to Frank, who thought that he had been privy to all of the Group's files. Watts then tells Frank that the Polaroid Man's interest in him is due to the Millennium Group's interest in him-- but he stops short of a full explanation.

After exhausting all of his usual resources and hypotheses in tracking down Catherine's abductor, Frank realizes that answers to the profile lie within himself. As he turns from the information about the Polaroid Man to his own personal history he begins to find clues to Catherine's whereabouts. A series of numbers flash within Frank's mind. They are the address of a house -- his and Catherine's former home. On his insistence police raid the house but find it abandoned. Frank remains there and eventually discovers a clue, another Polaroid of another house. Using his computer, Frank pinpoints the house's location. Unable to organize a second police raid, Frank sets out to rescue his wife alone, and armed.

As Frank descends into the dark basement he finds Catherine, her hands still bound to the low ceiling. Before he can do anything to help her he is blinded by the flash from a Polaroid camera. He opens fire. The Polaroid Man lunges from the darkness and stabs Frank in the shoulder. A struggle ensues, the camera is activated and flashes over and over, documenting the fight. Frank seizes the knife and drives it into the Polaroid Man again and again, killing him. Catherine must turn away, as if she does not recognize her own husband. Later, as she packs her husband's belongings into a suitcase she tells Frank it seemed as if he had sacrificed something for the safety of Jordan and herself. She asks for time and distance to see if it can ever be returned. Frank leaves the house, bags in hand, and drives off into the night.

The second season premier brought with it an updated and altered variant of the show's opening credits sequence. Morgan and Wong changed the show's tagline from "wait, worry, who cares?" to "this is who we are, the time is near" and added a number of apocalyptic new images to the sequence. Millennium's opening titles would change with every new season.

The Polaroid Stalker notes that the scientific name of the Millennium Comet is P1997 Vansen-West, a designation taken directly from an episode of Morgan and Wong's Space: Above and Beyond. The comet was named for that show's protagonists, Lieutenant Nathan West and Captain Shane Vansen.

The 'print ad' for this episode states for the first time the name of days remaining, 832.

(Comprised of 0 murders + 1 kills in self defence + 0 justifiable homicides + 0 suicides.)