A profile of Millennium episode The Innocents, synopsis, images, credits, related trivia and facts plus the original promotional trailer where available. The episodes follow the original US TV Air Date/DVD box set order which is most familiar to the majority of fans.

In France, this episode was entitled Les Innocents which translates into English as The Innocents. [View all]

In Finland, this episode was entitled Viattomat uhrit, osa 1/2 which translates into English as The innocent victims, part 1/2. [View all]

In Germany, this episode was entitled Himmelblaue Augen which translates into English as Heavenly Blue Eyes. [View all]

Random scenes from The Innocents

There are a total of 165 images for The Innocents which are available in our Episode Image Gallery. 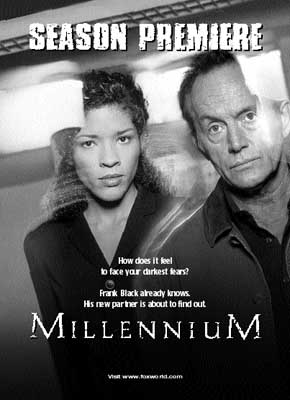 Eight months following the fade of the Marburg Virus that killed Catherine, Frank and Jordan find themselves in Washington, D.C. Frank not only has difficulty getting back to work with the Federal Bureau of Investigation but also is given a hard time from Catherine's bitter father. When the case of a plane crash full of identical blonde women seems to hold connections to the Millennium Group and other Marburg mysteries, Frank decides to join Special Agents Emma Hollis and Barry Baldwin in investigating.

Season Premiere. How does it feel to face your darkest fears? Frank Black already knows. His new partner is about to find out.

Please note that this is the original Fox synopsis and occasionally this may differ from the events that were actually filmed. Please also view the The Innocents episode transcript which has been painstakingly checked for accuracy against the actual episode.

Inside a dark house, an elderly woman, her eyes an almost supernatural color of blue, lies on a daybed, her body connected to a filtration machine. The old woman whispers the words, "it has begun," causing an Attendant to clasp the woman's hand in her own. Meanwhile, aboard a jet airplane, a Fair-Haired Woman, who has facial features similar to those of the Attendant's, and who possesses eyes much like those of the elderly woman, makes her way to a lavatory. She retrieves a handgun hidden inside a towel dispenser. A lavatory smoke alarm sounds in the forward galley, alerting a stewardess (who bears a resemblance to the Fair-Haired Woman) to possible trouble. But when the stewardess confronts the Fair-Haired Woman, she suddenly grabs the revolver and fires shots into the ceiling. The force of the vacuum sucks the Fair-Haired Woman out of the plane.

Frank Black and his daughter, Jordan, have relocated to Falls Church, Virginia. Frank undergoes an FBI psychiatric evaluation. As Dr. Luanne Chase listens, Frank insists that Catherine and everyone else who died as a result of the outbreak were murdered. He also states that he is anxious to return to work.

Meanwhile, FBI, FAA and NTSB investigators comb through the wreckage of the downed airliner. The investigation is headed by FBI Agent Barry Baldwin, an ambitious man who has never been in charge of such a large-scale case. Amongst the other members of the team is FBI Agent Emma Hollis, an attractive woman in her late 20s. She discovers the body of the stewardess. Shortly thereafter, the revolver is discovered embedded in the soil.

Frank begins experiencing visions of the plane crash. He telephones Assistant Director Andy McClaren at the FBI Academy. He states that he is unable to rid his mind of the disaster, partially due to the number of children on board (twenty-three in all). Frank makes his way to the crash site, where he meets Baldwin and Emma Hollis. Emma reveals that the stewardess's fingerprints were found on the handgun. According to Emma, Baldwin believes that the stewardess was a disgruntled employee who smuggled the gun on board and sabotaged the jet. Shortly thereafter, Frank digs through a section of the lavatory, unearthing a cigarette butt from inside a sink trap. He notes pink lipstick on the filter. Frank suspects that someone else was inside the lavatory. He takes special interest in a DMV photo of a blonde woman named Deena Bartus. He compares Bartus' photo to that of the stewardess, and notices a distinct resemblance. Emma points out that both women lived in Salt Lake City, Utah.

Meanwhile, a woman who bears an exact resemblance to the stewardess drives up to a house listed as Deena Bartus' address. The woman lifts a two-year-old girl from the backseat of the car and makes her way inside the house. Suddenly, the structure is ripped apart by a violent blast. Frank travels to Utah when he is informed of the explosion. The little girl died in the blast, but the female victim managed to survive. Frank and Emma discover a trap door that leads to an underground shelter. Inside is an array of survival supplies, along with two hermetically sealed transport caskets, one for an adult and one for a child.

Frank returns to the FBI Academy. He tells McClaren that victims of the viral outbreak (the same outbreak that killed Catherine) are inside the caskets. McClaren fails to see how the outbreak, the plane crash and the house explosion are connected. Nonetheless, bio-suited FBI agents unseal the caskets. To Frank's disappointment, they are empty. McClaren instructs Frank to return home. Frank receives a surprise visit from Emma. She believes that the female victim of the house explosion has the answers they've been looking for. The pair travel to the hospital. There, Frank questions the woman, Mary, about the explosion and the incident aboard the plane. She explains that her sisters, and their children, were the real targets of the outbreak. Mary gives Frank and Emma the name of the location where the last living child can be found.

Emma and Frank travel to a rural farmhouse. But moments before they arrive, a woman who resembles the stewardess drives off with a two-year-old girl strapped into the car seat. Emma and Frank spot the pair and give chase. As the woman drives onto a bridge, another vehicle begins to pass her. A truck driver in the opposite lane slams on his brakes, and the rig begins to jackknife. The woman panics and loses control of the car. It comes to rest on the edge of the bridge, where it dangles precariously. Frank attempts to save the woman and the little girl. But the woman insists that the girl not be touched. She raises her hands off the steering wheel, and the car plunges over the side of the bridge. Frank then notices three men near the end of the bridge, observing from afar. Frank runs towards the men, but they enter their car and drive off.

The third season premiere brought with it an updated and altered variant of the show's opening credits sequence. The show's tagline was changed from "this is who we are, the time is near" to "wait, worry, the time is near," a number of new images were added to the sequence, and Klea Scott's name and face took the place of Megan Gallagher's. Millennium's opening titles changed with every new season.

(Comprised of 4 murders + 0 kills in self defence + 0 justifiable homicides + 2 suicides.)