A profile of Millennium episode Exegesis, synopsis, images, credits, related trivia and facts plus the original promotional trailer where available. The episodes follow the original US TV Air Date/DVD box set order which is most familiar to the majority of fans.

In France, this episode was entitled Exégèse which translates into English as Exegesis. [View all]

In Finland, this episode was entitled Viattomat uhrit, osa 2/2 which translates into English as The innocent victims, part 2/2. [View all]

In Germany, this episode was entitled Fünf - zwölf which translates into English as Five - Twelve. [View all]

There are a total of 130 images for Exegesis which are available in our Episode Image Gallery. 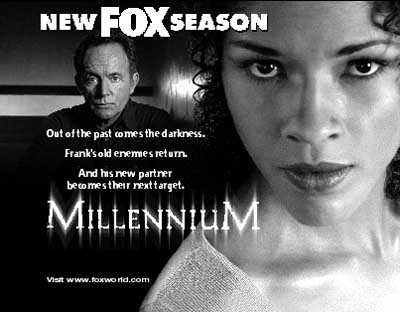 Frank Black and his new partner, Special Agent Emma Hollis, continue to investigate a family of identical women that are being systematically killed off. Are they the product of a Cold War experiment in remote viewing? If so, what is the now-murderous Millennium Group's interest in having them brutally killed off?

Out of the past comes the darkness. Frank's old enemies return. And his new partner becomes their next target.

512: The number by which the elderly woman was known.

"Forasmuch as an excellent spirit, and knowledge, and understanding, interpreting of dreams, and shewing of hard sentences, and dissolving of doubts, were found in the same Daniel, whom the king named Belteshazzar: now let Daniel be called, and he will shew the interpretation."

Please note that this is the original Fox synopsis and occasionally this may differ from the events that were actually filmed. Please also view the Exegesis episode transcript which has been painstakingly checked for accuracy against the actual episode.

As seen in the previous episode, Frank and Emma observe as rescue workers extract the bodies of a woman and a little girl from wreckage beneath a bridge. Meanwhile, at the hospital, Mary lapses into a seizure. Doctors and interns rush to her aid, and watch as an EEG machine fluctuates wildly. The woman returns to a normal state, easing the doctor's fears. But unknown to anyone inside the hospital room, one of male nurses is actually a man named Mabius, one of the men Frank observed on the bridge (in the previous episode).

Back at Quantico, Baldwin briefs his task force. He announces that the airliner was sabotaged by a group of people, not by a lone flight attendant. He adds that the group is connected to the viral outbreak that killed seventy people (including Catherine). But Frank believes the group is not comprised of terrorists. Rather, he believes that the women, and their daughters, are being annihilated for reasons unknown. When Peter Watts steps forward, Frank accuses the Millennium Group of orchestrating his wife's death.

When Emma enters the hospital, she discovers Mary's unconscious body on the floor of her room. Sensing foul play, Emma reviews the hospital's security tapes. She discovers that Mabius injected something into Mary's IV drip and then fled the building. While searching the room for clues, Emma comes upon a digital clock displaying the time "5:12." This piques her interest, as the electrical power was cut a few minutes after four o'clock.

Emma discovers that document cinders found inside the demolished house (see previous episode) were pieces of Freedom of Information requests made five years earlier. The documents made mention of a government project called Grillflame. Frank recognizes the name as a CIA project run through the Stanton Research Institute. Emma travels to the university, where she meets with Dr. Coty. He explains that Grillflame was a government project that employed "psychic spies." The spies-who were identified by numbers instead of names-possessed the ability to project themselves into other environs, allowing them access to other nation's secrets. One of the psychics, Coty recalls, possessed amazing powers that allowed her to see into the future. Emma correctly guesses that the woman was known by the number "512." Later, a forensics doctor confirms that all four of the dead women, who all appear to be the same age, were half-sisters.

Emma and Frank review videotape footage made in 1972 of "512" (who is actually the Elderly Woman) as she projected herself psychically. When this footage is compared with the security tape from the hospital, Frank realizes that Mary did not lapse into a seizure shortly before her death. Rather, she had been in the process of psychically projecting herself for reasons unknown. Frank realizes that a little girl who had been listed on the downed airliner's passenger manifest was not aboard the plane. The crash, he concludes, was part of a smokescreen concocted by the women to save the little girl from the Millennium Group.

By closely studying the hospital security tape, and piecing together the words Mary uttered during her psychic projection, Emma pinpoints the location where the Elderly Woman is hiding. That location is a missile silo in Virginia. The pair travel to the silo, where Frank locates the Elderly Woman, and Emma locates another of the Sisters.

Frank and the Elderly Woman board an elevator and make their way up the silo shaft. But their progress is halted when Mabius sabotages the elevator's electrical control box. Frank forces open the elevator doors and attempts to climb out. But the elevator suddenly springs to life, pinning him between the elevator and the floor above. Frank screams as he is nearly severed in two. Suddenly, the elevator rises, releasing Frank. The Eldery Woman tells him that the Millennium Group wants the world to end. She then takes Frank's hand. He is suddenly struck by a series of internal images, including one of Jordan standing on a staircase holding a large paper butterfly.

Frank regroups with Emma and the Sister. The Elderly Woman, however, is gone. Later, the Sister signs a lengthy confession, admitting that she participated in a conspiracy to down the airliner. After reading the confession, Emma tells Frank that it is one very large lie, as no mention is made of Grillflame, the Elderly Woman, or the Millennium Group.

Frank purchases a paper butterfly for Jordan. Later, he sees his daughter standing on the staircase, butterfly in hand, the future realized.

Exegesis is the act of exposition or explanation, especially a critical interpretation of a text or portion of Scripture. In this episode, Frank struggles to explain or interpret the facts before him and the symbolic visions he receives while talking with 512.

(Comprised of 2 murders + 0 kills in self defence + 0 justifiable homicides + 0 suicides.)