A profile of Millennium episode ...Thirteen Years Later, synopsis, images, credits, related trivia and facts plus the original promotional trailer where available. The episodes follow the original US TV Air Date/DVD box set order which is most familiar to the majority of fans.

Welcome Frank.
There are 138 days remaining.

In France, this episode was entitled Treize Ans Plus Tard which translates into English as Thirteen Years Later. [View all]

In Finland, this episode was entitled Intohimona murha which translates into English as Passion for murder. [View all]

In Germany, this episode was entitled Halloween which translates into English as Halloween. [View all]

There are a total of 205 images for ...Thirteen Years Later which are available in our Episode Image Gallery. 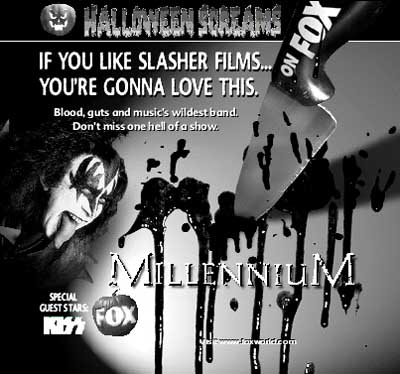 To Frank Black's dismay, a movie is being shot based upon an infamous serial killer case he himself solved 13 years ago. Things get a little out of hand when new murders begin occurring with the same pattern featured in the film and case files. Frank hopes to find the answers during the filming of the movie's finale, at a KISS concert, while Emma searches famous horror films for clues.

If you like slasher films... You're gonna love this. Blood, guts and music's wildest band. Don't miss one hell of a show.

Please note that this is the original Fox synopsis and occasionally this may differ from the events that were actually filmed. Please also view the ...Thirteen Years Later episode transcript which has been painstakingly checked for accuracy against the actual episode.

Inside an F.B.I. classroom, a lecturer addresses a roomful of attentive agents. Though we do not see the speaker's face, we hear Frank Black's voice describing a horrific murder case, one that happened during the week just before Halloween.

In flashback, Frank and Emma are summoned to a motel in Trinity, South Carolina. The pair meets with Sheriff Fritz Neuenschwander, who walks them through a murder scene. The sheriff explains that two individuals, actress Marta Danbury and director Lew Carroll, were both viciously murdered inside their room. Both were in town filming a small B-movie on a nearby soundstage.

Shortly thereafter, Frank, Emma and the sheriff travel to the soundstage, where they observe several actors and a film crew shooting a picture which, it turns out, is based on a murder case Frank investigated thirteen years earlier. Frank is offended when he realizes that most of the factual evidence in the case is being completely ignored in favor of sensationalism. Frank and Emma interview the principals, as many had a motive for the killings.

Among them is producer Kenny Neiderman, who had been sleeping with Marta Danbury; Rowdy Beeman, who suddenly rose to the rank of director upon Lew Carroll's demise; actress Ruby Dahl, whose role was drastically expanded to compensate for Danbury; Sir Douglas Latham, an aging British stage actor; Sara Cryer, the film's unit publicist; John and Don, the film's screenwriters, who were displeased with Carroll's take on their screenplay; flirtatious star Ramona Tangent; and Mark Bianco, a method actor who portrays Frank Black in the film. Also included on the suspect list is Hugo Winston, whose fiancie was murdered by the killer thirteen years earlier. Hugo declares that the production desecrates the name of the deceased.

Most of the crew members gather to watch the filming of a scene in which Ruby Dahl goes skinny-dipping in a pool. Once the scene is photographed, the crew assembles around folding tables where a caterer distributes sandwiches. As the director bites into his sandwich, he realizes that the "meat" is, in fact, a human finger. Rowdy recognizes a ring on the severed digit, and proclaims that producer Niederman has been killed.

Despite protests from an irate cast and crew, the sheriff closes down the shoot. Meanwhile, Emma speculates that the murderer may be using classic horror films as the inspiration for the manner in which he kills. The pair conclude that the suspect may strike at the motel where the crew is staying. A figure lures them upon the roof of the building, where they discover body of publicist Sara Cryer dangling upside down from a rope, a death that mirrors killings seen in the films Halloween and Friday the 13th. Meanwhile, one of the film's extras, a man named Hector, confesses to the crimes. Frank destroys his credibility. Nonetheless, the mayor proclaims that production may resume.

Frank and Emma realize that horror films were playing on television on the nights of all the murders. The pair consult a television listing and discover that the film Motel Hell is being broadcast that evening. They race to the soundstage, where it is discovered that several members of the crew had their vocal cords severed, a la Motel Hell. Frank also discovers Hugo Winston, his body hanging by the neck, a butcher knife nearby.

Frank finds it difficult to believe that Hugo is the killer. Emma consults the television listings, but because it is Halloween, the airwaves are filled with movie marathons, making it impossible to predict how the killer will strike next. Emma stays at the hotel to watch television, hoping for some insight into how the murderer thinks. Meanwhile, Frank drives back to the soundstage, where the crew films a climactic scene set at a nightclub. He scrutinizes his surroundings as movie extras dressed in Halloween costumes mill about the sound stage. Suddenly, Sheriff Neuenschwander's corpse crashes down from the rafters. Pandemonium breaks out, and during the confusion, Frank realizes that in most B-movies, the leading lady dies last. But Ramona is spotted nearby, safe and sound. Frank realizes the killer will target Emma.

He races to the motel, where Mark Bianco, armed with a chainsaw, is on the loose. Emma manages to shoot at the chainsaw, causing it to stop. Bianco produces a gun and takes aim at Frank. The pair aim their guns at each other. Bianco explains that, as the consummate professional actor, he wanted to be Frank, to see what the killer saw. Frank manages to get off a shot, and a wounded Bianco falls to the ground.

Back at the F.B.I. classroom, the lecturer concludes his story. But we see that the speaker is not Frank Black. It is Mark Bianco. And his audience is not comprised of F.B.I. agents, but of fellow inmates inside an insane asylum.

"I shot a whole music video with Kiss during that episode. We were going to cut it as a music video. In fact, Kiss wanted it done as a music video for them. The material that we shot - it was terrific... We shot it in half a day, their music number, and it was pretty wild, but it was fun. It was a lot of fun. They were great."

(Comprised of 8 murders + 0 kills in self defence + 0 justifiable homicides + 0 suicides.)