A profile of Millennium episode Skull and Bones, synopsis, images, credits, related trivia and facts plus the original promotional trailer where available. The episodes follow the original US TV Air Date/DVD box set order which is most familiar to the majority of fans.

In France, this episode was entitled Ossements which translates into English as Bones. [View all]

In Finland, this episode was entitled Pikkutarkat päiväkirjat which translates into English as The meticulous diaries. [View all]

In Germany, this episode was entitled Opfer 38 which translates into English as Victim 38. [View all]

Random scenes from Skull and Bones

There are a total of 190 images for Skull and Bones which are available in our Episode Image Gallery. 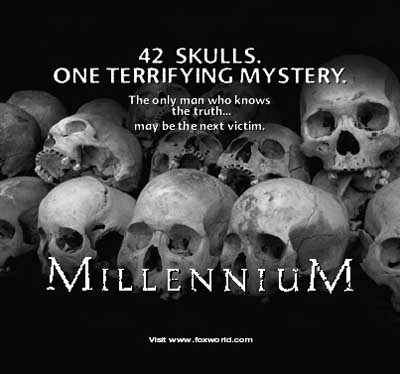 When Emma Hollis and Barry Baldwin are dispatched to investigate a mass grave found beneath a highway construction site they come face to face with Peter Watts and a Millennium Group team. Frank Black, at Quantico investigating the case through a reclusive and paranoid man who seems to have witnessed the killings, tries his best to determine what interest the Millennium Group has in the deaths. Both Frank and Emma soon discover the Group may have sinister intent and that anyone who uncovers the truth may be in grave danger.

42 Skulls. One terrifying mystery. The only man who knows the truth... may be the next victim.

Please note that this is the original Fox synopsis and occasionally this may differ from the events that were actually filmed. Please also view the Skull and Bones episode transcript which has been painstakingly checked for accuracy against the actual episode.

In Arlington, Virginia, a man named Ed sits on a park bench, quietly recording thoughts in a leather spine journal. As Ed looks up, he experiences visions of a human skull and skeletal hand. Meanwhile, in Fingus, Maine, construction site workers uncover a skeleton hand and a human skull buried beneath the dirt.

Watts arrives at the site, where he meets with Sheriff Walden. Walden suspects that the unidentified remains came from another area, as everyone living in his small county are accounted for. Shortly thereafter, Agents Baldwin and Hollis arrive at the scene. Baldwin is surprised to see Watts at the site. Watts explains that he and his team happened to be working another case nearby when he received a call regarding the discovery.

Back at Quantico, McClaren tells Frank that, fifteen years earlier, he received a strange letter after a woman named Cynthia Paggett disappeared. The note described in great detail how Paggett was murdered. But police never found a body. Over the course of the year, McClaren received five more letters, each describing the murder of another victim who vanished into thin air. The last two words of the author's latest note read: "Fingus, Maine."

Emma discovers a bullet hole in one of the skulls pulled from the construction site. She also discovers a ceramic plug covering another hole in the skull. Emma realizes that the victim had undergone surgery. She also realizes that such a procedure would be very uncommon, and hopes to identify the victim through the use of medical records.

In the first note McClaren received, the author pinpointed the exact location of Cynthia Paggett's murder. Frank travels to that location, but the old address turns out to be a parking lot. Frank notices someone watching him from an apartment window nearby. When Frank enters the structure, Ed attempts to make a getaway. Frank orders the man to stop. Just as suddenly, Ed freezes, a crazy expression on his face. Later, Frank discovers a hidden door inside Ed's apartment. The door leads to a library containing leather spine journals, each one bearing the name of a different victim.

Using computer technology, measurements taken from the skull are used to reconstruct the victim's face. The image matches Paggett's photograph. McClaren phones the site with word that a suspect has been taken into custody. He tells the agents that there are six victims in all. The agents believe that the case is reaching a conclusion.

Meanwhile, Frank finishes researching Ed's journals-thirty-six in all. The spine of the final volume reads: "Cheryl Andrews, M.D." Frank tells Ed that he once worked with Andrews, who disappeared the previous year. Ed, however, is very vague about what happened to her. McClaren interrupts the conversation when he drops by the apartment. Frank tells him that Ed witnessed the first murder from his apartment window. He then reveals that there are many bodies yet to be found -- each victim a successful professional.

Frank telephones Emma Hollis. He tells her that Peter Watts is at the dig to find Cheryl Andrews' remains and keep their discovery a secret. He accuses the Millennium Group of killing Andrews. Armed with the new information, Emma unearths more bones.

Ed tells Frank that the lives of all of the victims were detailed in newspaper accounts. In the case of Cheryl Andrews, she had made a trip to Germany to report on a bizarre discovery she had made while performing an autopsy. But Andrews was arrested by customs officials. Records indicate she was deported, but Ed believes she was murdered. Emma phones Frank with information. She tells him that a "Homer B. Pettey" authorized Andrews' release from a German prison. Later, Watts tells Emma that Andrews died in her home town of Omaha ten months earlier. Watts hands Emma a newspaper clipping of Andrews' obituary. Emma travels to the town library in Fingus, Maine. She finds an identical obituary on microfilm. She then notices a series of freestanding educational panels, each with a different heading. One of the panels lists the names of property owners affected by a new freeway. One of those names is "Homer B. Pettey."

Frank tells McClaren that Ed linked together forty-three disappearances simply by reading lots and lots of newspapers and magazines. As a result of the murder he witnessed, Ed read obsessively and built connections about everyone he came across. Over the course of fifteen years, he developed a special gift. But if Ed ever came forward, Frank believes the Millennium Group would have him killed. Frank urges McClaren to release Ed, believing he will be safer on his own. Later, Frank drives Ed back to his apartment. When Frank and Ed arrive at the apartment building, Frank notices a suspicious white van parked out front. When Frank enters the apartment, Mabius attacks him. A battle ensues, and Mabius falls out a window, crashing onto the van below. The van roars to life, and Ed makes a getaway.

Emma travels to the home of Homer B. Pettey. Inside, she discovers frightening-looking tools. She realizes the dwelling was used for killing the victims. Watts confronts Emma, assuring her that she has arrived at the wrong conclusion. Shortly thereafter, as Watts and Emma observe, a bulldozer ploughs through the house. Watts maintains that forty-three "threats" to the United State-forces that could have easily torn the country apart-are gone. Emma glares at Watts and walks away.

(Comprised of 0 murders + 0 kills in self defence + 0 justifiable homicides + 0 suicides.)