A profile of Millennium episode Omerta, synopsis, images, credits, related trivia and facts plus the original promotional trailer where available. The episodes follow the original US TV Air Date/DVD box set order which is most familiar to the majority of fans.

In France, this episode was entitled Omerta which translates into English as Omerta. [View all]

In Finland, this episode was entitled Ihmeellistä naisenergiaa which translates into English as Miraculous female energy. [View all]

In Germany, this episode was entitled Lassa und Rose which translates into English as Lassa And Rose. [View all]

There are a total of 180 images for Omerta which are available in our Episode Image Gallery. 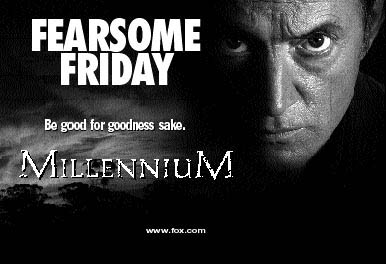 Frank Black decides to take Jordan on a Christmas vacation rather than allow her to dwell on the fact that this will be their first holiday without Catherine. The small Vermont town they travel to proves to be less quiet than expected, however, when the two become involved with a dead Mafia hit man who appears in the woods looking very much alive! What is the secret behind two magical women living amongst the trees and what effects do they have on those they heal?

Be good for goodness sake.

Please note that this is the original Fox synopsis and occasionally this may differ from the events that were actually filmed. Please also view the Omerta episode transcript which has been painstakingly checked for accuracy against the actual episode.

In 1989, three armed mobsters-Donnie, Paolo and Boney-march a fourth man through a pine forest located near Coker Creek, Vermont. Their prisoner is Eddie "Scarpino" Gianini, a former colleague who none-too-wisely had an affair with a powerful mob boss’s wife. Shortly thereafter, the mobsters open fire, killing Eddie. Later that night, a female form finds Eddie’s body... and drags it into the forest.

In the present day, Frank takes Jordan Christmas shopping. Jordan takes special interest in a nail polish display. She tells her father the polish is identical to the kind she purchased for Catherine the previous year, which is still in its original wrapping back home. Jordan is sad because it’s their first Christmas without Catherine, and she’s broken her arm. Frank decides to spend Christmas in Vermont. As he and Jordan enter the town of Coker Creek, they spy a small monument in front of town hall. The monument is a carving of a hairy creature known as "Littlefoot." A short time later, Sheriff Earl Parker arrests a man wandering almost-naked through town, his body clad only in Eddie’s bloodied, bullet hole-ridden jacket. The man, Al Ryan, claims he cannot remember how he came upon the jacket. Realizing he will need help with the case, Parker turns to Frank. At the sheriff’s station, Al tells Frank and Parker that he had been attacked and killed by a wolf during a hunting trip. When he regained consciousness, he found himself inside a cave, a feminine figure leaning over his body.

Frank, Parker and Al travel to the pine forest. There they discover the remnants of torn, bloodied clothing. At first, Parker believes that Al attacked and killed a victim. But a wallet found inside a pair of shredded blue jeans identifies them as belonging to Al. Frank concludes that Al probably was attacked by an animal... though he is unsure why he shows no signs of having been mauled. As Frank and the others follow the tracks through the woods, they come upon a figure of a man. A chase ensues. The figure suddenly leaps from the brush. Frank tackles the figure -- which turns out to be Eddie Gianini.

Frank and Emma meet with Prosecutor Polgreen, who helped bring down Santo’s operation. Polgreen interrogates Eddie, and questions him about the murder of some dead mobsters. To Polgreen’s surprise, Eddie confesses to the killings. He admits to having carried out some twenty-seven murders in all. Polgreen is deeply suspicious, especially when Eddie refuses to identify where he has been hiding for the previous nine years.

Frank concludes that Eddie used the "Littlefoot" legend to draw attention away from something else hiding in the pine forest. He, Emma and a search team return to the wooded area, where they discover a small cave. Inside are two waifish women. The women, Rose and Lhasa, are brought to the Coker Creek clinic for treatment and observation. After performing a physical exam, a doctor determines they are both in perfect physical and psychological condition. The women are, however, unable, or perhaps unwilling, to speak. A short time later, Frank watches in amazement as Lhasa heals the battered face of a woman who had been the victim of domestic violence.

Frank begins searching through some photographs that Emma brought with her. Lhasa and Rose see the photos... and recognize Eddie’s face amongst them. They also recognize stills of Donny, Paolo and Boney. Both women tell Frank and Emma that the threesome "whacked" Eddie, and that later, they brought him back to life. Polgreen realizes the women can testify to this in court, and thereby prevent the case against the Santo family from unraveling. A short time later, Frank learns that Eddie made bail... and his whereabouts are unknown. It doesn’t take long for Frank to realize that Eddie has again taken refuge inside the cave. Frank pays Eddie a visit, and during their conversation, it becomes clear that during Eddie’s nine-year stay in the cave, he told the women about his exploits as a mobster in great detail. He realizes that once word gets out that Rose and Lhasa are cooperating with the government, the mobsters will have them eliminated.

When Eddie and Frank return to the clinic, they discover that Rose and Lhasa have disappeared. But their fears are quickly put to rest when they find Jordan teaching the women how to use a swing set in a park nearby. An amazed Frank notices that Jordan’s broken arm is now completely healed. Jordan tells her father that Lhasa performed the miracle. As Frank and Jordan walk back to the hotel, Jordan wonders if the women might be able to bring Catherine back to life. A short time later, Boney, Paolo and Donny open fire on Eddie and the women. Lhasa is hit by the gunfire and falls to the ground. Lhasa is rushed to the clinic, where she is placed under constant surveillance. Shortly thereafter, Eddie tells Frank that the prosecutor’s office declined his offer to testify in court, due to his reputation as a mobster who faked his own death.

Jordan and Frank return to the clinic. There, Jordan unwraps the nail polishes and begins painting Lhasa’s hand. Lhasa squeezes the girl’s hand in her own. Later, Frank tells Eddie that authorities will move Lhasa from the clinic that night.

At the clinic, orderlies lift Lhasa into a waiting ambulance. Rose climbs inside to be near her. As the ambulance pulls away, Frank notices that Eddie is behind he wheel. After the ambulance has turned a corner, it apparently bursts into flames. Later, Jordan correctly surmises that her father would never let anything happen to Rose and Lhasa.

In a remote mountain cabin, Eddie wishes Rose and Lhasa a Merry Christmas.

(Comprised of 3 murders + 0 kills in self defence + 0 justifiable homicides + 0 suicides.)