A profile of Millennium episode Human Essence, synopsis, images, credits, related trivia and facts plus the original promotional trailer where available. The episodes follow the original US TV Air Date/DVD box set order which is most familiar to the majority of fans.

Welcome Frank.
There are 184 days remaining.

In France, this episode was entitled Démons Intérieurs which translates into English as The Devil Inside. [View all]

In Finland, this episode was entitled Valkoinen vaara which translates into English as The white peril. [View all]

In Germany, this episode was entitled Heroin which translates into English as Heroin. [View all]

There are a total of 140 images for Human Essence which are available in our Episode Image Gallery. 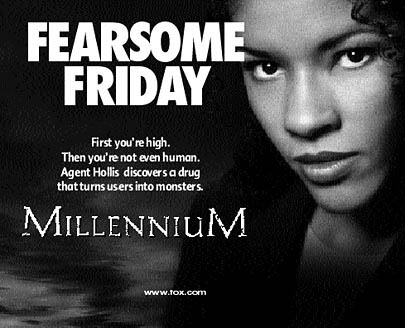 A series of events in Vancouver reveals that Emma Hollis' half-sister has developed a heavy drug habit which is affecting Emma's position with the FBI. Emma is soon faced with a painful choice. Should she drop the matter to preserve her role with the Bureau or get to the bottom of what local addicts claim to be a series of bizarre mutations being forced on them through tainted heroin?

First you're high. Then you're not even human. Agent Hollis discovers a drug that turns users into monsters.

Please note that this is the original Fox synopsis and occasionally this may differ from the events that were actually filmed. Please also view the Human Essence episode transcript which has been painstakingly checked for accuracy against the actual episode.

Inside a flophouse motel in Vancouver, British Columbia, a young drug addict named Elissa gives herself a heroin injection. As her roommate, Tamra, prepares to follow suit, Elissa makes her way to the bathroom. Suddenly, Elissa's body is rocked by violent spasms. Fearing for her friend's well-being, Tamra enters the bathroom. To her horror, Elissa has transformed into a reptilian-looking creature. Tamra runs into the hallway, where she calls for help. There she encounters two drug dealers, Pulga and Johnny. The two men enter the room as Tamra waits outside. Shortly thereafter, they exit-and warn Tamra not to tell anyone about the incident. Tamra reenters the room, but finds it empty. She peers out an open window into the alley below, where she sees Elissa's lifeless body. She then phones Emma Hollis at FBI headquarters.

Back at Quantico, McClaren tells Frank that Emma tested positive for heroin. Frank dismisses the idea as absurd. A short time later, Agent Baldwin discovers a packet containing white powder amongst Emma's personal belongings. Frank approaches Emma, hoping she will shed some light on the situation. But she decides to take her attorney's advice and remain silent. Emma travels to Vancouver, where she pays a young dealer to help her find Tamra. The dealer runs off into the night. A short time later, a car pulls to the curb and Tamra, badly in need of a fix, steps out. Emma checks her into a methadone house. There, Emma tells Tamra that the substance she sent her in the mail has not been tested. Tamra claims that the heroin turns people into monsters. She also tells Emma that a dealer named Pulga is distributing the drug. Shortly thereafter, Emma approaches the young dealer she paid to find Tamra. He tells her where she can find Pulga.

Emma drives to the flophouse motel, but she has little luck finding Pulga. She then boards a freight elevator and descends to a vestibule that leads to the alleyway where Elissa met her death. Suddenly, a car enters the alley and bears down on her. Johnny exits the vehicle and opens fire. Emma manages to escape and makes her way back to the elevator. Johnny pursues her into the vestibule, where a struggle ensues. Emma manages to disarm her attacker and knocks him into the space where the elevator will soon land. Realizing he will be crushed, Johnny surrenders. But when the elevator comes to a halt, Pulga, gun in hand, exits. Emma tries to run, but Johnny pins her against a wall. She accuses the duo of selling contaminated heroin. As police sirens sound in the distance, the dealers shove Emma onto the floor and kick her repeatedly. They then make their escape.

Frank travels to Vancouver after he discovers Tamra's name in Emma's Rolodex. He visits Emma in her holding cell at the Vancouver police department. He is now aware that Tamra is actually one of Emma's relatives. Emma explains that Tamra sent her an unmarked packet in the mail. Emma tasted the sample, thereby explaining how she tested positive for heroin use. A short time later, Frank receives a phone call from McClaren. It turns out that the white powder that had been sent to Emma is eighty per cent heroin.

Frank checks with Vancouver police in hopes of verifying Tamra's story about Elissa. Unfortunately, there are no unidentified bodies at the morgue that match her description. A short time later, Detective Rondell, of the Royal Canadian Mounted Police, contacts Emma and Frank when Elissa's body is pulled from a river. As Frank and Emma observe, a coroner performs an autopsy on the body. Emma tells the coroner about Tamra's claim that Elissa resembled a monster shortly before her death. The coroner explains that his office has seen a number of overdoses in which the victims were searching for that mythological monster, a kind of urban legend. Frank begins to suspect that the disfigurement Tamra spoke of was temporary in nature. Meanwhile, Pulga and Johnny approach their Asian supplier. They tell him that the heroin is making people sick. The Asian man demands proof.

Frank contacts McClaren at FBI headquarters. He tells him that a lab test has revealed a foreign hormone in Elissa's skin cells. McClaren tells Frank that the FBI has dropped its investigation of Emma. Frank is taken aback by this development… and concludes that Tamra's life may be in danger. Meanwhile, Pulga and Johnny inject Tamra with the contaminated heroin, which causes her to transform into the reptilian creature. Now possessing their proof, Pulga and Johnny bring Tamra to the Asian man. The Asian man is horrified by what he sees. He orders both men into a nearby minivan.

While searching through various mug shots of Chinese gang members, Frank comes upon the image of Mr. Wing Ho. Frank experiences horrific visions of Ho, and later questions Rondell about Ho's affiliation with the heroin trade in British Columbia. Rondell explains that Ho works as a chemist for the Hong Kong triads. He also believes that Ho is an informant for the United States government, a result of his brother being executed by the Dai Lo in Taiwan.

Meanwhile, at an urban warehouse, the Asian Man confronts Ho, who always remains in the shadows, about the heroin and its affect on Tamra. The Asian man instructs Ho to step into the light. Ho complies, and for the first time, the Asian man sees the severity of his deformities. Ho admits he poisoned all the heroin. Frank and Emma make their way to the warehouse. There, they discover the bodies of Pulga and Johnny. The warehouse has been doused with gasoline, as the dealers want to destroy the contaminated heroin. Despite the danger, Frank enters the building. He finds Mr. Ho sitting in a large puddle of gasoline. Nearby, he finds Tamra huddled beneath a table. Frank lifts Tamra into his arms and carries her to safety moments before the warehouse is destroyed by flames. When Frank returns to Quantico, he shows McClaren a model of a synthetic hormone that was injected into Tamra's body. The compound had been developed at a United States Army research facility some six years earlier. McClaren tells Frank that the entire issue has been forgiven. But Frank assures him that he is wrong.

(Comprised of 5 murders + 0 kills in self defence + 0 justifiable homicides + 1 suicides.)