A profile of Millennium episode Loin Like a Hunting Flame, synopsis, images, credits, related trivia and facts plus the original promotional trailer where available. The episodes follow the original US TV Air Date/DVD box set order which is most familiar to the majority of fans.

Welcome Frank.
There are 86 days remaining.

In France, this episode was entitled Amour Immaculé which translates into English as Immaculate Love. [View all]

In Finland, this episode was entitled Kapseli kuolemaan which translates into English as A capsule of death. [View all]

In Germany, this episode was entitled Tote Jahre which translates into English as Dead Years. [View all]

There are a total of 100 images for Loin Like a Hunting Flame which are available in our Episode Image Gallery. 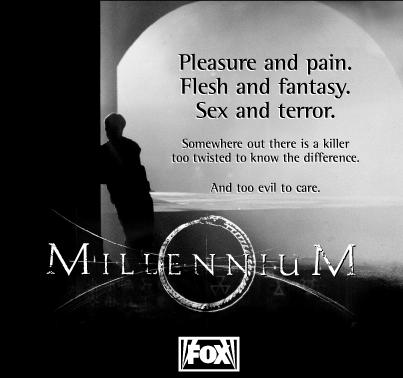 Frank Black and Millennium Group sex crime expert Maureen Murphy are called to Colorado to investigate when a man's marriage failings turn into deadly sexual fantasies, attending local raves and swingers parties to track the killer. Unfortunately, the investigative pair find resistance in the form of a biased sheriff and a local law enforcement team unprepared to deal with such sexual attacks.

Two souls, alas, are housed within my breast. - Faust

Please and pain. Flesh and fantasy. Sex and terror. Somewhere out there is a killer too twisted to know the difference. And too evil too care.

Please note that this is the original Fox synopsis and occasionally this may differ from the events that were actually filmed. Please also view the Loin Like a Hunting Flame episode transcript which has been painstakingly checked for accuracy against the actual episode.

Near the University of Colorado at Boulder, a group of college-age students gather at a warehouse/techno night club. Art Nesbitt, a pharmacist, approaches a couple, Mel and Leslie. He opens his palm, revealing two capsules. Under the influence of the powerful drugs, the couple accompany Nesbitt to a small room. Nesbitt captures their lovemaking on videotape, then injects them with a lethal poison.

The naked bodies of Mel and Leslie are discovered in a lush botanical garden, their genitalia covered with leaves as if mimicking the garden of Eden. Frank and Millennium Group member Maureen Murphy are called to the scene where they meet with Boulder Homicide Detective Thomas. He admits his discomfort with working the case with a female (Murphy), telling Frank that women do not understand male sexuality.

Meanwhile Nesbitt spies on a group of seven couples engaged in spouse-swapping in an upper middle class suburban home. Two women, Sylvie and Anne, leave the group and drive to a liquor store. When a blue light flashes behind the car, Sylvie pulls off the road. Nesbitt, impersonating a policeman, steps up to the vehicle.

The next day two men from the swing party, Mark and Vic, tell police their wives are missing. A short time later the bodies of Sylvie and Anne are discovered on a park bench, posed as lovers.

A couple, Laurie and Randy, enter Nesbitt's pharmacy with a prescription for an anti- diarrhetic drug for their honeymoon trip to Bali. Nesbitt hands them both a capsule and suggests they swallow it immediately for maximum effect.

Additional toxicology results indicate the perpetrator may have inadvertently contaminated his ecstasy-like drug with difficult-to-obtain controlled substances. Frank concludes the killer may have legitimate access to the drugs. He also believes the killer uses the drugs himself, allowing him to act on intensely sexual fantasies--fantasies the killer made real.

Further investigation leads the Millennium Group to Nesbitt's pharmacy, but Nesbitt is not on duty. Realizing Nesbitt is the killer, the group travels to his home. There they interview his wife, Karen, who tells Maureen that she and her husband haven't had sex for eighteen years. But she remarks how her husband recently told her how much he would like to try again.

Thomas admits to Frank that Maureen is a good investigator--his real problem is that he himself is uncomfortable with the case. Thomas had investigated sex crimes in West Hollywood, and felt as though he had become "contaminated," discovering he could not make love to his wife. They have since divorced.

Frank realizes Nesbitt is recapitulating sexual encounters he feels he should have experienced prior to marriage, capturing his victims in the happiest, most perfect moments in their lives. Thinking back on his inspection of the Nesbitt home, Frank realizes he missed something. A hidden trap door is discovered in the garage and opened, and Randy and Laurie are rescued from an old bomb shelter beneath the garage. Frank discovers Nesbitt inside his bedroom, about to inject his wife with poison. Frank knocks the syringe from Nesbitt's hand. But Nesbitt retrieves the needle and injects himself with a fatal dose.

The episode's title is taken from "The Ballad of the Long-Legged Bait" by Dylan Thomas. Among the quatrains included in the six-page poem is one that reads, "And steeples pierce the cloud on her shoulder / And the streets that the fisherman combed / When his long-legged flesh was a wind on fire / And his loin was like a hunting flame." The poem is known for its surrealistic metaphors concerning sex and sexuality and, as a result, the line chosen as the episode's title seems an apt means of depicting the fantasy-prone sexual mindset of serial killer Art Nesbitt.

Character: Nesbitt, who was unable to consummate his marriage. Nesbitt's operation or plication is a surgical procedure to correct a deformity of the penis.

Succlynocide: Clearly spoken by Terry O'Quinn and spelled that way in subtitles. However, a web search shows no reference other than the transcript. Probably based on the real drug succinylcholine (pron. suk-sin'l-koleen), a muscle-relaxant that has been used in real-life murder. Credit: Libby of TIWWA

(Comprised of 4 murders + 0 kills in self defence + 0 justifiable homicides + 1 suicides.)