A profile of Millennium episode Force Majeure, synopsis, images, credits, related trivia and facts plus the original promotional trailer where available. The episodes follow the original US TV Air Date/DVD box set order which is most familiar to the majority of fans.

Welcome Frank.
There are 345 days remaining.

In France, this episode was entitled Force Majeure which translates into English as Major Force. [View all]

In Finland, this episode was entitled Tuomiopäivän tuulet which translates into English as The doomsday winds. [View all]

In Germany, this episode was entitled 1000 letzte Tage which translates into English as 1000 Last Days. [View all]

There are a total of 90 images for Force Majeure which are available in our Episode Image Gallery. 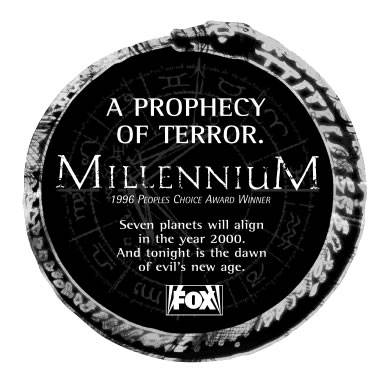 An unusual man prepares his bizarre family of cloned daughters for the great apocalyptic disaster of May 5th, 2000. While attempting to investigate a seemingly paranormal chain of events linked to these blonde-haired, blue-eyed girls, Frank Black and the Millennium Group find they have a thorn in their side in Dennis Hoffman, a man who is a self-proclaimed expert on the great planetary alignment that will cause the anticipated disaster.

You remember a single deluge only, but there were many previous ones. - Plato

A prophecy of terror. Seven planets will align in the year 2000. And tonight is the dawn of evils new age.

Please note that this is the original Fox synopsis and occasionally this may differ from the events that were actually filmed. Please also view the Force Majeure episode transcript which has been painstakingly checked for accuracy against the actual episode.

A sudden hail storm sends students at Washington Polytech scrambling for cover. But one of the students, Lauren, wades through the downpour as the hail changes to rain. She approaches a teaching assistant who has taken cover in a breezeway. Lauren reaches for the woman’s cigarette-and suddenly bursts into flames.

Frank travels to Washington Polytech where he interviews the teaching assistant. She describes her classmate as "mutant brilliant." The T.A. points out a set of armillary spheres, a model of the seven innermost planets of our solar system rendered in brass. She states that the Millennium Group member who interviewed her previously, Dennis Hoffman, thought he would be interested in the spheres. When Frank exits the room, he meets the mysterious Hoffman. He intones that on May 5, 2000-the day in which the seven innermost planets will align for the first time since the Great Flood--our planet will be ravaged by a cataclysmic event. He also believes the catastrophe will be preceded by abnormal weather patterns.

Watts tells Frank that Hoffman first approached the group years earlier during a cult investigation. He believes Hoffman is somewhat odd but harmless. Watts uncovers evidence proving Lauren is not her parents’ biological offspring, yet there are no papers documenting her adoption.

Cheryl Andrews performs an autopsy on Lauren’s body. When traces of an accelerant are discovered, the cause of death is ruled as self-immolation. Andrews discovers an astronomical symbol carved into the flesh on her thigh. The mark is a symbol for conjunction, or aligrunent. When another girl, Carlin, a dead-ringer for Lauren, commits suicide by diving into a waterfall, Andrews discovers a conjunction symbol carved in her thigh as well. The women, it is determined, are identical twins born seven years apart. Andrews describes a technique used to create identical cattle in which a fertilized egg is divided multiple times in vitro. The technique produces twenty copies. Frank believes that someone, like Noah preparing for the Great Flood, is breeding identical offspring in preparation for May 5, 2000.

A tip from Hoffman leads the Millennium Group to The Atrium at Pocatello, Idaho. Ssomeone had made telephone calls to each of the twenty girls from a secret room in the Atrium’s basement. The Group tracks the building’s designer to a large remote house, and discovers the girls inside.

Despite Frank’s objections, a police lieutenant, fearing a Jonestown-like massacre, places the girls in protective custody and loads them on a bus. Meanwhile, the girls’ father, a man confined to an iron lung, explains his reasons for creating perfect children for the next millennium--to preserve what is good about humanity and remake the world in his own image. He reveals that he telephoned Lauren and Carlin and told them he was dying and wouldn’t make it to the other side. Shortly thereafter, both girls committed suicide. Later, a power outage stops the iron lung, killing the man.

The bus driver, it is revealed, is also one of the Iron Lung Man’s offspring. Police find the bus abandoned. The girls have vanished and Dennis Hoffman with them. Later, Frank realizes the Atrium is built on giant shock absorbers, and is itself a kind of ark. He knows where they will be on May 5, 2000.

When Frank visits Dennis Hoffman in his hotel room, the number on the door is "7", a number that is referenced many times in this episode: the number of planets, the confirmed dead in the storm, the lamps outside the campus building, the people who survived with Noah, the separate prophecies of Nostradamus predicting the apocalypse, Revelations verse seven, Exodus verse seven, the ova discovered at Carlin's autopsy, Lauren and Carlin were born seven years apart. Chris Carter has said that the movie "Se7en" was an influence in creating Millennium.

The location used for the the 'Atrium' at Pocatello in the episode was the Shadbolt Centre for the Arts in Deer Park, Burnaby, BC.

Thanks to Libby and Mandi Sheridan.

While the planetary alignment of May 5, 2000 was an actual event, during which the six innermost planets of our solar system aligned, the predicted cosmic catastrophe associated with it never came to pass. The same celestial alignment will not to occur again until the year 2675. Coincidentally, May 5, 2000 was also Lance Henriksen's 60th birthday.

(Comprised of 0 murders + 0 kills in self defence + 0 justifiable homicides + 2 suicides.)