A profile of Millennium episode Through a Glass, Darkly, synopsis, images, credits, related trivia and facts plus the original promotional trailer where available. The episodes follow the original US TV Air Date/DVD box set order which is most familiar to the majority of fans.

Through a Glass, Darkly

In France, this episode was entitled Recommencement which translates into English as Restarting. [View all]

In Finland, this episode was entitled Susi lammasten vaatteissa which translates into English as A wolf in sheep's clothing. [View all]

In Germany, this episode was entitled Vergebung which translates into English as Forgiveness. [View all]

Random scenes from Through a Glass, Darkly

There are a total of 130 images for Through a Glass, Darkly which are available in our Episode Image Gallery. 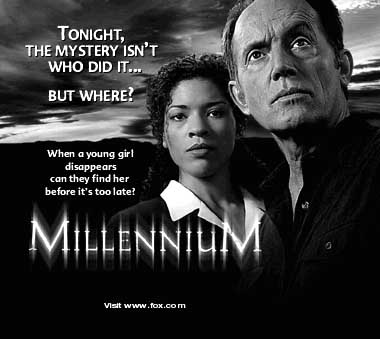 When a child disappears in a small town, attention immediately turns to a recently released sex offender tried and convicted for similar offenses twenty years ago. Frank Black and Emma Hollis arrive on the scene and are quick to point out that this man may not be deserving of their blame and their hate for him is blinding them to the true series of events.

Tonight the mystery isn't who did it... but where? When a young girl disappears can they find her before it's too late?

Please note that this is the original Fox synopsis and occasionally this may differ from the events that were actually filmed. Please also view the Through a Glass, Darkly episode transcript which has been painstakingly checked for accuracy against the actual episode.

The year is 1979. The place is Tullane Creek, Oregon. A figure approaches a little girl who is sitting on a swing in a deserted, fog-shrouded park. The girl, whose name is Casey Peterson, screams and runs away when she sees the stranger. Deputy Paul Dietz comes to Casey's rescue. He tackles the man and demands to know the whereabouts of a missing girl named Mary Flanagan. The suspect, whose name is Brunelli, leads police to a derelict trailer. Inside is the body of the girl.

In the present day, Frank and Dr. Angela Horvath attend Brunelli's parole hearing. Also present is a now-grown Casey Peterson and her father, Sam. Horvath, who is a therapist, believes that Brunelli is well enough to be released. Frank surprises Horvath when he states that recidivism in child sex crimes is quite high. But despite Frank's dire predictions that Brunelli might be a danger to society, the parole board releases him.

Brunelli returns to Tullane Creek, where he is met by his attorney, Randle Jarrett. Dietz, who is now sheriff, warns Brunelli that it is his duty to inform the community of his presence. People throughout town scorn Brunelli, and even Brunelli's own father calls him a "piece of dirt." It isn't long before Brunelli approaches a young girl named Julie as she walks along a wooded path. A teacher spots the pair, but they run off when she approaches.

Julie's friend, Shannon McNulty, disappears. Preliminary evidence points to Brunelli, and he is transported to the police station for questioning. While Brunelli is in custody, Frank and Emma search his cabin for clues. The pair discover a small notebook containing ten drawings of a girl on a swing. Frank bends back the pages. As the pages fly forward, the drawings animate, and the girl moves forward and back on the swing. Later, the agents question Brunelli. He gives them precise directions as to where the missing girl can be found (inside an old trailer). But Dietz tells the agents that the trailer is where Mary Flanagan was found years earlier, and that it has already been searched. Nonetheless, Emma travels to the trailer. She discovers that someone left a bunch of wild flowers inside. Meanwhile, Frank studies Brunelli as he sits at the police station. He watches as the suspect lights matches, again and again, and snuffs them out using his thumb and forefinger.

Brunelli is released from jail due to a lack of evidence. Meanwhile, Frank returns to the path in the woods where Mary Flanagan was last seen. Dietz tells Frank that a teacher reported seeing Brunelli talking to a little girl on the path. But police are unsure of the girl's identity. Later, Frank and Emma travel to the home of Brunelli's father. There they discover a scrap of cloth identical to the fabric Shannon was wearing when she disappeared.

Police tail Brunelli to the park where he approached Casey Peterson years earlier. Frank approaches Brunelli. He tells him that, contrary to what police believe, he suspects that Brunelli did not kidnap the missing girl. But Brunelli tells him that he will remember where Shannon is. Later, Jarret escorts his daughter, Julie, to the police station. Julie admits that Brunelli approached her as she walked along the path. She tells police that Brunelli told her, "don't be afraid." She then produces one of Brunelli's St. Josephs medals.

Brunelli manages to slip away from police surveillance. When word reaches Frank, he realizes that Brunelli went to Casey Peterson's house. Frank's hunch is correct: Brunelli approaches Casey and hands her a book of drawings. As Emma drives to the Peterson residence, Frank remains behind at the police station. He reviews a police videotape containing footage of Brunelli's original confession some twenty years earlier. He notices Jarret lighting a cigarette and snuffing out the flame with his thumb and forefinger in the exact same manner as Brunelli. Meanwhile, when Emma and Dietz arrive at the Peterson residence, they discover that Casey's father has beaten Brunelli with a baseball bat. Jarret comes to his client's aid and transports him away from the scene.

Frank tells Emma that Jarret is the real murderer and has been using Brunelli all along by brainwashing him with false memories. It all started years earlier when Brunelli approached-but did not harm-Casey in the park. Brunelli was arrested, and Randle Jarret stepped forward to defend him. Frank also realizes that Julie isn't Jarret's only daughter. He and Emma drive to the Jarret residence, where they confront Karen Jarret. At first, Karen claims that her daughter, Amanda, went away to college. She then changes her story, confirming Frank's suspicion. The agents discover the existence of a storm shelter in the backyard. There they discover evidence of Shannon's imprisonment.

Jarret drives the beaten Brunelli back to Brunelli's old house. When Brunelli walks into his bedroom, he discovers Shannon's lifeless body. Brunelli reacts, horrified. Frank arrives at the scene, but is attacked by Jarret. Brunelli comes to Frank's aid, knocking Jarret to the ground. When Frank finds Shannon's body, he realizes she is still alive. He tells Brunelli to go for help. Brunelli runs down the street, looking for assistance. Suddenly, a car driven by Brunelli's father appears in the distance. The old man bears down on his son. At the last moment, Brunelli's father has a change of heart and turns the wheel. But the decision comes too late, and Brunelli is struck down by the car. Brunelli recovers from his injuries and moves back to his old house. One day, Shannon and a friend leave a food-filled basket on Brunelli's doorstep, then run off. Brunelli's father exits the house, and stands beside his son on the porch.