This page is an introduction to Nazareth whose music was used during the Millennium episode Skull and Bones. A complete list of all music by Nazareth that was used throughout Millennium is also listed below.

This music profile has been viewed 19206 times.

When Emma Hollis and Barry Baldwin are dispatched to investigate a mass grave found beneath a highway construction site they come face to face with Peter Watts and a Millennium Group team. Frank Black, at Quantico investigating the case through a reclusive and paranoid man who seems to have witnessed the killings, tries his best to determine what interest the Millennium Group has in the deaths. Both Frank and Emma soon discover the Group may have sinister intent and that anyone who uncovers the truth may be in grave danger.

Still images from Skull and Bones

There are a total of 190 images for Skull and Bones which are available in our Episode Image Gallery.

Music by Nazareth used in the Millennium episode Skull and Bones

Nazareth is an earthy and versatile Scottish rock band that had several hard rock hits, as well as scoring with the Felice and Boudleaux Bryant penned ballad, "Love Hurts", in the middle of the 1970s.


Where Nazareth can be heard in Skull and Bones

The Millennium episode Skull and Bones contains the following music by Nazareth:

Music from Nazareth was used in a total of 1 episode/s of Millennium. Below is a complete list of all music by Nazareth heard throughout the series and the episodes in which it was used, including links to the relevant music and episode profiles:

Nazareth was formed in 1968 in Dunfermline, Scotland out of the ashes of semi-professional local group The Shadettes (formerly the Mark V and The Red Hawks) by vocalist Dan McCafferty, guitarist Manny Charlton, bassist Pete Agnew, and drummer Darrell Sweet. They took their name from the first line of The Band's classic song "The Weight" ("I pulled into Nazareth/Was feelin' half past dead...") The band moved to London, England in 1970, and released their self-titled debut album in 1971. After getting some attention with their second album Exercises, released in 1972, Nazareth issued Razamanaz in early 1973. This collection spawned two UK Top Ten hits, "Broken Down Angel" and "Bad Bad Boy." This was followed by Loud 'N' Proud in late 1973, which contained another hit single with a hard-rocking cover of Joni Mitchell's song "This Flight Tonight". Then came another album Rampant, in 1974, that was equally successful although it did not yield a single. A non-album song, again a cover version, this time of Tomorrow's "My White Bicycle", was a UK Top 20 entry in 1975.

Hair Of The Dog, was released in 1975. The title track of that album (popularly, though incorrectly, known as "Son Of A Bitch" due to its chorus lyrics; by Dan McCafferty, the title is the same that heir of the dog = son of a bitch) became a staple of 1970s rock radio. American version of the album included a song originally recorded by The Everly Brothers and also covered by Roy Orbison, the expressively melodic ballad "Love Hurts" that was released as a hit single in the UK and in the USA, where it went Platinum. In addition, the track became the band's only U.S. Top Ten hit 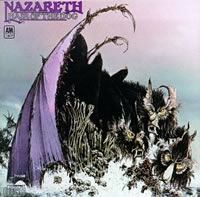 Scene:
Love Hurts can be heard during the following scenes in the Millennium episode Skull and Bones:

Heard when FBI Agent Emma Watts arrives at the farmhouse. Startled by a radio that starts playing the song 'Love Hurts' sung by Nazareth, she quickly turns around and walks toward the radio sitting on the back of a stove. She sees that it is plugged into an automatic timer.

In the fall of 1975, it would be transformed into a highly successful hard-rock ballad by Nazareth. This was the only rendition of the song to become a big hit single, reaching no.8 on the Billboard Hot 100 in early 1976.

The lyrics of the song remained unchanged on all cover versions up to Nazareth's 1975 recording, where the original line "love is like a stove/burns you when it's hot" is curiously changed into the considerably less logical "love is like a flame/burns you when it's hot". (A flame cannot by definition be anything other than hot, as opposed to a stove - hence the original wording makes a lot more sense)

The following video clip relates to Love Hurts by Nazareth:

Sorry, we do not currently have any other stored websites for Nazareth. If you are aware of a quality website for this artist, please contact us and we'll add it to this page.