Sorry, there are currently no Millennium related interviews with Tiffany Desrosiers, however we do have many other Cast and Crew interviews which you may find of interest.

This profile has been viewed 7352 times. 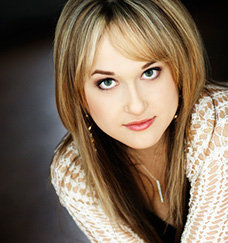 Tiffany Desrosiers (de-rose-ee-ay) was raised in suburban Vancouver, British Columbia Canada. Her performing career has covered many areas in entertainment from film to live music and finally music recording. Tiffany had her first stage performance at age 9, and performed as a teen actress in the late 90's.

As an actress Tiffany had a significant string of appearances on the screen including her role as one of Santa's ldquo;naughty listrdquo; girls in the Disney Channel movie The Ultimate Christmas Present, Greg Beeman (2000). She also appeared as Shannon McNulty in Millennium Season 3, Episode 7, ldquo;Through A Glass, Darklyrdquo;.

As long the way Tiffany also had several principal parts in advertisement. Throughout her early years Tiffany had a passion for singing and that passion eventually bloomed into a full time career which culminated in several significant achievements including first runner-up in the David Foster Star Search in 2008

In 2009, Tiffany is celebrating the release of her first audio CD, her debut album self titled Tiffany Desrosiers was released in June of 2009. The CD is a mix of music styles including pop. Tiffany is a classically trained vocalist so she is often referred to as a classical crossover.

Tiffany Desrosiers was a member of Millennium's cast.

An official website for Tiffany Desrosiers is available at:
http://www.tiffanydesrosiers.com/

Tiffany Desrosiers has an entry at the Internet Movie Database, available at:
https://www.imdb.com/name/nm1117899/

Sorry, we don't currently have a Wikipedia entry listed for Tiffany Desrosiers.

Sorry, we don't currently have a Facebook page listed for Tiffany Desrosiers.

Tiffany Desrosiers appeared in the following 1 episode/s of Millennium:

MLM#-307 Through A Glass, Darkly as Shannon McNulty