A profile of Millennium episode Kingdom Come, synopsis, images, credits, related trivia and facts plus the original promotional trailer where available. The episodes follow the original US TV Air Date/DVD box set order which is most familiar to the majority of fans.

There are currently 3 episode reviews available for this episode. You can access a list of all Millennium Episode Reviews here.

In France, this episode was entitled Désillusion which translates into English as Disillusion. [View all]

In Finland, this episode was entitled Yhden miehen inkvisitio which translates into English as A one-man inquisition. [View all]

In Germany, this episode was entitled Dein Reich komme which translates into English as Thy Kingdom Come. [View all]

There are a total of 110 images for Kingdom Come which are available in our Episode Image Gallery. 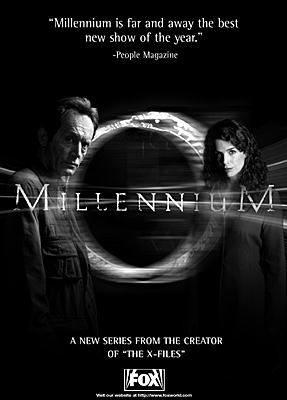 A desperate man embarks on a cross-country killing spree, taking his revenge on the holy men he perceives to have led him astray in faith. Frank Black knows that the man's sense of faith, or lack thereof, is the key to stopping his killing spree. Soon, however, Frank's determination leads him right into the lion's den when he willingly walks into a hostage situation at a small town church.

And there will be such intense darkness, That one can feel it. - Exodus 10:21

Please note that this is the original Fox synopsis and occasionally this may differ from the events that were actually filmed. Please also view the Kingdom Come episode transcript which has been painstakingly checked for accuracy against the actual episode.

A man (ultimately revealed as Galen Calloway) burns a Catholic priest at the stake outside his church. At the crime scene, Frank reunites with Millennium Group member Ardis Cohen. They had worked together on a case four years ago when three men of the cloth were murdered in a similar ritualistic fashion.

In his research, Frank identifies a similarity between these modern crimes and the Christian tortures of church heretics during the Middle Ages. His assumption is confirmed when the killer grotesquely drowns a Wyoming minister in an imitation of another medieval torture. At the scene of the crime, the police retrieve two clues. A man's wedding ring is found inside the victim's stomach. Near the corpse is a woman's wedding/engagement band, engraved JMM.

At a Rockford, Illinois church, the killer is interrupted while rifling through its files. He was searching for something so important he acted without his usual thoroughness, and left bloody fingerprints behind. All along Frank has been receiving glimpses inside the killer's mind. A sudden illumination strikes him. He realizes the murderer is not killing men -- he's killing faith. The victims must have some religious significance in the killer's life. He stole the files in order to choose his next victim. Frank now believes that the killer experienced an emotionally catastrophic event-- a loss devastating enough to have destroyed his faith, and transformed him into a homicidal monster.

Frank and the police are close on the killer's trail, but too late to save the life of Reverend Harned, whom Calloway has cruelly tortured. But Frank realizes that the killer has returned to the place where his life was destroyed. When Frank sees visions of a woman and child trapped in a house fire, he has the Rockford police search their records, and they find their man: Galen Calloway, a high school religious teacher who was the only survivor of a 1989 fire that killed his wife and daughter. Frank knows Calloway's next stop: the church that held his family's funeral.

His body wired with explosives, Calloway invades the church, and takes the everyone inside hostage. He preaches his loss of faith to the terrified congregation while SWAT teams and media swarm outside.

Frank is convinced he can reach Calloway, and risks his life by going in to face him. Calloway holds Frank at gunpoint, but Frank calmly tells Calloway he can help him because he knows what Calloway wants. Calloway believes his pain will end when he kills his faith. Yet despite everything he has done, Frank points out, Calloway has never lost his faith in God.

Calloway knows what Frank is saying is true, but he's never understood it himself before this moment. He places his gun to Frank's head, but fires the gun into the air. The SWAT team enter the church and overpower Calloway.

Frank goes home and he and Catherine talk. Frank decides he's going to tell Jordan that bad things happen, but we have to balance sadness with hope and faith.

Frank: Calloway knew we were on our way. He didn't hurry. He didn't compromise the ritual. He was resigned, committed. He's become comfortable. You get the luxury of calmness in a murder when you know your surroundings.

Frank: I felt how human Calloway was – so inundated by pain, fragmented by grief. It led him to surrender his humanity.

This was the first episode to be aired out of production order. The reason given was that a senior Roman Catholic prelate, Cardinal Joseph Bernardin, had died November 14, 1996, the day before it was due to air and was re-scheduled out of respect. However, others think this may have been a publicity ploy by Fox to bolster Millennium's falling ratings by putting it back in the news.

(Comprised of 3 murders + 0 kills in self defence + 0 justifiable homicides + 0 suicides.)