Talking Heads - The Beginning and the End - Millennium Music Profile

This page is an introduction to Talking Heads whose music was used during the Millennium episode The Beginning and the End. A complete list of all music by Talking Heads that was used throughout Millennium is also listed below.

This music profile has been viewed 14937 times.

Still images from The Beginning and the End Talking Heads married punk rock sensibilities with poppy sounds, clipped funk, art school intellectualism, and later, world music. In David Byrne, they had one of the most distinctive front men of the period; they remained popular during their lifetime, and their concert film Stop Making Sense (made at the Pantages Theater in Hollywood, directed by Jonathan Demme) is acclaimed as one of the finest examples of the genre

The Millennium episode The Beginning and the End contains the following music by Talking Heads:

Music from Talking Heads was used in a total of 1 episode/s of Millennium. Below is a complete list of all music by Talking Heads heard throughout the series and the episodes in which it was used, including links to the relevant music and episode profiles:

At the start of their career, Talking Heads were all nervous energy, detached emotion, and subdued minimalism. When they released their last album about 12 years later, the band had recorded everything from art-funk to poly rhythmic world beat explorations and simple, melodic guitar pop. Between their first album in 1977 and their last in 1988, Talking Heads became one of the most critically acclaimed bands of the '80s, while managing to earn several pop hits. While some of their music can seem too self-consciously experimental, clever, and intellectual for its own good, at their best Talking Heads represent everything good about art-school punks.

And they were literally art-school punks. Guitarist/vocalist David Byrne, drummer Chris Frantz, and bassist Tina Weymouth met at the Rhode Island School of Design in the early '70s; they decided to move to New York in 1974 to concentrate on making music. The next year, the band won a spot opening for the Ramones at the seminal New York punk club CBGB. In 1976, keyboardist Jerry Harrison, a former member of Jonathan Richman's Modern Lovers, was added to the lineup. By 1977, the band had signed to Sire Records and released its first album, Talking Heads: 77. It received a considerable amount of acclaim for its stripped-down rock & roll, particularly Byrne's geeky, overly intellectual lyrics and uncomfortable, jerky vocals.

For their next album, 1978's More Songs About Buildings and Food, the band worked with producer Brian Eno, recording a set of carefully constructed, arty pop songs, distinguished by extensive experimenting with combined acoustic and electronic instruments, as well as touches of surprisingly credible funk. On their next album, the Eno-produced Fear of Music, Talking Heads began to rely heavily on their rhythm section, adding flourishes of African-styled polyrhythms. This approach came to a full fruition with 1980's Remain in Light, which was again produced by Eno. Talking Heads added several sidemen, including a horn section, leaving them free to explore their dense amalgam of African percussion, funk bass and keyboards, pop songs, and electronics.

After a long tour, the band concentrated on solo projects for a couple of years. By the time of 1983's Speaking in Tongues, the band had severed its ties with Eno; the result was an album that still relied on the rhythmic innovations of Remain in Light, except within a more rigid pop-song structure. After its release, Talking Heads embarked on another extensive tour, which would turn out to be their last; it's captured on the Jonathan Demme-directed concert film Stop Making Sense. After releasing the straightforward pop album Little Creatures in 1985, Byrne directed his first movie, True Stories, the following year; the band's next album featured songs from the film. Two years later, Talking Heads released Naked, which marked a return to their worldbeat explorations, although it sometimes suffered from Byrne's lyrical pretensions.

After its release, Talking Heads were put on "hiatus"; Byrne pursued some solo projects, as did Harrison, and Frantz and Weymouth continued with their side project, Tom Tom Club. In 1991, the band issued an announcement that they had broken up. Five years later, the original lineup minus Byrne reunited as the Heads for the album No Talking Just Head. Then in 1999, all four worked together to promote a 15th-anniversary edition of Stop Making Sense. 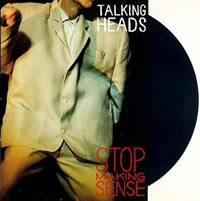 Scene:
Life During Wartime can be heard during the following scenes in the Millennium episode The Beginning and the End:

Heard when The Polaroid Man who has abducted Catherine Black pushes the fake moustache and beard under the car and picks up the ticket, closing his car door. He drives his car forward and puts the ticket in the machine. He turns on his radio and the music of the Talking Heads song "Life During Wartime" begins to play loudly. The attendant lets him through.

Life During Wartime is a song by New Wave band Talking Heads. Pinhead Gunpowder has a song by the same name.

It first appeared on Fear of Music in 1979. Its live version from Stop Making Sense in 1983 was released as a single peaking, at #80 on the Pop Singles Chart.

The congas on the studio version were played by Gene Wilder and Ari Up.

The song's lyrics tell of a civil insurrection in the USA (the cities Houston, Detroit and Pittsburgh are mentioned by name) with the singer commenting on various activities involving an apparent guerilla movement. The singer laments that due to having to live underground, he can't go to night clubs. A phrase from the lyrics, "This ain't no party / This ain't no disco", became a catchphrase in the Punk Rock and New Wave music genres.

Listen to Life During Wartime

The following video clip relates to Life During Wartime by Talking Heads:


Lyrics for Life During Wartime:

The following lyrics are the property of the respective authors, artists and labels. The lyrics to Life During Wartime are provided for educational and research purposes only. Please support Talking Heads by purchasing relevant CD's or legal music downloads.

Heard of a van that is loaded with weapons,
Packed up and ready to go
Heard of some grave sites, out by the highway,
A place where nobody knows
The sound of gunfire, off in the distance,
I'm getting used to it now
Lived in a brownstore, lived in the ghetto,
I've lived all over this town

Transmit the message, to the receiver,
Hope for an answer some day
I got three passports, a couple of visas,
You don't even know my real name
High on a hillside, the trucks are loading,
Everything's ready to roll
I sleep in the daytime, I work in the night time,
I might not ever get home

Heard about Houston? Heard about Detroit?
Heard about Pittsburgh, P. A.?
You oughta know not to stand by the window
Somebody might see you up there
I got some groceries, some peanut butter,
To last a couple of days
But I ain't got no speakers, ain't got no
Headphones, ain't got no records to play

Why stay in college? why go to night school?
Gonna be different this time
Can't write a letter, can't send a postcard,
I can't write nothing at all
This ain't no party, this ain't no disco,
This ain't no fooling around
I'd like to kiss you, I'd love you hold you
I ain't got no time for that now

Trouble in transit, got through the roadblock,
We blended with the crowd
We got computer, we're tapping phone lines,
I know that ain't allowed
We dress like students, we dress like housewives,
Or in a suit and a tie
I changed my hairstyle, so many times now,
I don't know what I look like!
You make me shiver, I feel so tender,
We make a pretty good team
Don't get exhausted, I'll do some driving,
You ought to get some sleep
Get you instructions, follow directions,
Then you should change your address
Maybe tomorrow, maybe the next day,
Whatever you think is best
Burned all my notebooks, what good are
Notebooks? they won't help me survive
My chest is aching, burns like a furnace,
The burning keeps me alive
Try to stay healthy, physical fitness,
Don't want to catch no disease
Try to be careful, don't take no chances,
You better watch what you say

An official website for Talking Heads is listed at:

The following other websites are listed for Talking Heads: