A profile of Millennium episode Gehenna, synopsis, images, credits, related trivia and facts plus the original promotional trailer where available. The episodes follow the original US TV Air Date/DVD box set order which is most familiar to the majority of fans.

In France, this episode was entitled Le Visage de la Bête which translates into English as The Face of the Beast. [View all]

In Finland, this episode was entitled Kuin tuhka tuuleen which translates into English as As ashes before the wind. [View all]

In Germany, this episode was entitled Gehenna which translates into English as Gehenna. [View all]

There are a total of 135 images for Gehenna which are available in our Episode Image Gallery. 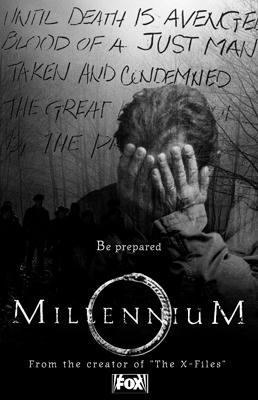 When large quantities of human ashes are discovered in the flowerbeds in a San Francisco park, Frank Black joins an investigation that will lead to an overpowering cult that kills those members unwilling to conform to expectations. In getting closer to the cult's all-powerful leader, Frank gets his first glimpse of a dark force that is controlling the killers he seeks.

I smell blood and an era of prominent madmen - W.H. Auden

Above all, taking the shield of faith, wherewith ye shall be able to quench all the fiery darts of the wicked.

Then shall he say also unto them on the left hand, Depart from me, ye cursed, into everlasting fire, prepared for the devil and his angels:

Please note that this is the original Fox synopsis and occasionally this may differ from the events that were actually filmed. Please also view the Gehenna episode transcript which has been painstakingly checked for accuracy against the actual episode.

San Francisco. A pack of clean-cut young men cruise the night in their black BMWs. At a dark abandoned factory, they turn on one of their own. They feed him LSD, terrorize him and leave him there to become the prey of a savage half-seen, half-human beast. When a disturbingly large amount of human ashes is discovered in a San Francisco park, Frank joins the other members of the Millennium Group in the investigation of this multiple homicide. Frank can sense that the killer has burned his victims alive to feed on their suffering. Chemical traces in the remains lead them to the abandoned factory, where Frank catches horrifying glimpses of the Beast and his crimes; and makes a grisly discovery: a set of human teeth.

Meanwhile, a shadow outside the house spooks Catherine while she's home alone with Jordan. Is it only her imagination? She tells Frank's friend Bletch that she must never let Frank suspect she and Jordan are in danger...or Frank may remain home to guard them, and never use his gift again. She is still unaware that the stalker from their past has followed the family to Seattle. Back in San Francisco, Frank's colleague Mike Atkins tells him that it is probable the objective of the person stalking his family is terrorizing Frank. At this point, he believes the danger to Frank's family is minimal.

The break in the investigation comes when dental records lead them to a young Russian immigrant who disappeared six months ago. They discover he had become a member of a mysterious apocalyptic cult -- who threaten to destroy their faithless in the fires of Gehenna (Biblical Hebrew for "hell").

Inside a cavernous office, the brainwashed cult members--all young, all male--telemarket hair products while Orwellian slogans strobe by on a screen. One young man is singled out as the next victim. This time instead of running into the arms of the Beast, the victim runs into someone unexpectedly waiting - Frank. The young man is taken into custody and questioned. Crazed by psychedelics and fear, the young man's ravings reveal the terrifying hold this bloodthirsty cult has over its members. He warns Frank that no one can escape the power of the Beast. Frank realizes this case is like nothing he's ever seen before when his prisoner literally wills himself to die.

Back in Seattle with his family, Frank goes online and uncovers the San Francisco address of Gehenna Industries. Atkins investigates, discovering a storehouse of doomsday weapons. The Beast lures Atkins inside a giant industrial microwave - where he had immolated his previous victims. Luckily, Frank realizes the danger, and sends the police after Atkins. The rescue team arrives just in time to save Atkins' life, but not before serious injury could be inflicted upon Atkins by the deadly microwaves.

The cult is smashed. The leader captured. But Frank knows that evil will always survive.

Frank to Catherine: Biblical concept of the devil's influence has lost any currency. Catherine: Language has changed. Science and psychology has given a clearer idea of why people commit evil acts. Frank: So the true source of evil is us. Or is there something out there – a force or a presence – waiting.

Ricardo Clement (the name of the bad guy in Gehenna) was an alias used by the Nazi Adolf Eichmann after the war. (Apparently the last name was also sometimes written with a K instead of a C.)

"Karl Adolf Eichmann (known as Adolf Eichmann; March 19, 1906 - May 31, 1962) was a high-ranking Nazi and SS-Obersturmbannführer (Lt. Colonel). Due to his organizational talents and ideological reliability, he was tasked by Obergruppenführer Reinhard Heydrich to facilitate and manage the logistics of mass deportation to ghettos and extermination camps in Nazi-occupied Eastern Europe. He was captured by Israeli Mossad agents in Argentina, indicted by Israeli court on 15 criminal charges, including charges of crimes against humanity and war crimes. He was convicted and executed by hanging."

"At the end of World War II, Eichmann was captured by the US Army, who did not know that this man who presented himself as "Otto Eckmann" was in fact a much bigger catch. Early in 1946, he escaped from US custody and hid in various parts of Germany for a few years. In 1948 he obtained a landing permit for Argentina, but did not seek to use it immediately. At the beginning of 1950, Eichmann went to Italy, where he posed as a refugee named Ricardo Klement. With the help of a Franciscan friar who had connections with archbishop Alois Hudal, Eichmann obtained an International Committee of the Red Cross humanitarian passport and an Argentinian visa. He arrived by ship in Argentina on July 14, 1950. For the next ten years, he worked in several odd jobs in the Buenos Aires area (from factory foreman, to junior water engineer and professional rabbit farmer). Eichmann also brought his family to Argentina. Argentina was and is a haven for many former Nazis."

As a sidenote: the motto over the gate of the Auschwitz concentration camp was Arbeit macht frei, which translates quite accurately as Work will set you free - one of the slogans that Mike Atkins sees in that Gehenna storage.

(Comprised of 8 murders + 0 kills in self defence + 0 justifiable homicides + 0 suicides.)